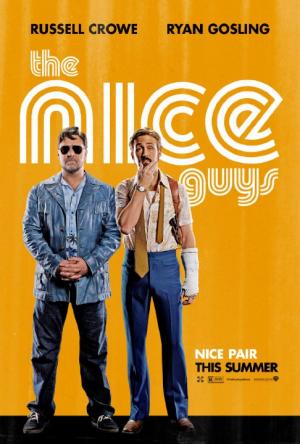 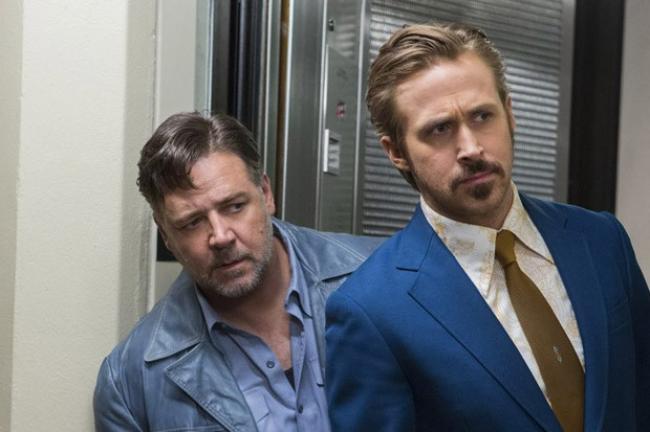 Russell Crowe and Ryan Gosling in The Nice Guys

Shane Black has long been good at writing action films combined with some humor. His first produced script was Lethal Weapon (1987) with my favorite of his being The Long Kiss Goodnight (1996). An action/comedy is a fine line to draw in a script. The action still has to contain some tension without the humor taking away from it. A little too much tension and the jokes seem out of place. Too many jokes and we can no longer take the action seriously. Black is fairly good at balancing that act, but he does give a little more to the humor side than he does the action.

The Nice Guys takes place in Los Angeles in 1977. Ryan Gosling plays Holland March, a single father who supports himself and his daughter as a low rent Private Investigator. He has been hired to investigate the death of a porn star named Misty Mountains. This leads to a missing young woman named Amelia who seems to be wanted by lots of different people. Amelia does not want to be found and hires tough guy Jackson Healey (Russell Crowe) to send Holland a message about ceasing and desisting. After a rocky start that involves Jackson breaking Holland's arm, the two team up, and are helped by Holland's 13 year old daughter, Holly, to find Amelia and discover why so many people want her found.

As this is a mystery, it would be unfair to give any other plot details away, but I can say this, Russell Crowe and Ryan Gosling are perfect together. Both are playing their best type of roles. Gosling may turn some women's heads in leading man parts but I only like him in light roles and I have never seen him in such a humorous part before. I laughed every time he got hurt. Russell Crowe is best in a tough guy role and his ever growing girth only adds to his imposing presence. He has not been this good since L. A. Confidential (1997). Considering that this movie takes place some 20 years after when L. A. Confidential took place, this almost works as a sequel of sorts. Adding to that is Kim Bassinger, who appears in both films.

Too often, movies forget to be fun. You would think that such a simple concept would be the point of nearly every movie ever made. Okay, so the art house crowd can spend hours dissecting color schemes and camera angles but I just want to be entertained for my money. The Nice Guys delivered that in a big way. Gosling breaking the window on the door is a scene I have been waiting years to see. He and Crowe work so damn well together. After we have seen lots of people get injured and killed, Gosling says to Crowe, "Look on the bright side. Nobody got hurt." Crowe corrects him with, "People got hurt." So Gosling clarifies, "I'm saying, I think they died quickly. So I don't think they got hurt." It's one of those scenes that is better watched. Another of my favorite moments is when Amelia justifies making a porn film in order to help take down fascism.

Speaking of particular scenes, there is one that I take extreme exception to. At one point, Holland's 13 year old daughter sneaks into a large adult party Holland and Jackson are at to find Amelia. Holly ends up sitting on a coach next to a porn actress who is proudly showing her, her film. We are never shown the movie in question but we hear all of the fake sex moans and groans. As far as I can tell from his IMDB bio, Black has no children and as such I believe he wrote that scene inaccurately. Other than a slightly awkward facial expression, Holly does not react at all to the graphic sex. As the scene is not played for laughs, there is something a bit perverted about that being in the movie, but that is just one father's opinion.

With that scene excluded, I completely loved The Nice Guys and I am genuinely hoping for a sequel. 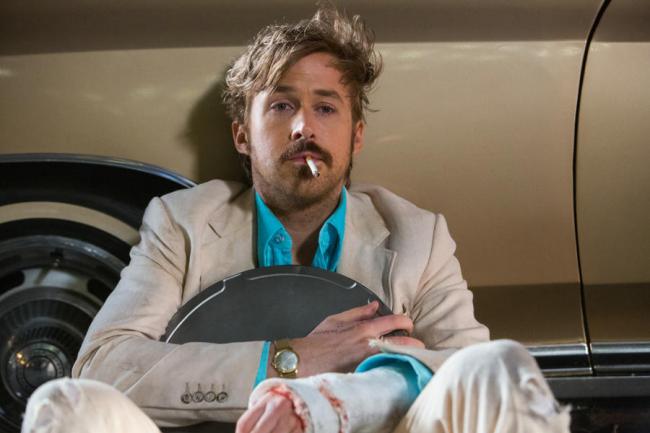 The Nice Guys harkens back to an age past not just with its setting, but with its very premise. It's a big budget, major studio, release with a smartly written script that places character and plot ahead of special effects. Perhaps most surprising is that it contains no superheroes of any kind and its intended audience appears to be grown-ups, and yet, as Eric said, its major goal is simply to entertain.

This isn't writer/director Shane Black's first foray into neo-noir territory. He visited similar territory in 2005's Kiss Kiss Bang Bang, which is my favorite of his films (until possibly this one). Both that movie and this were inspired in part by real life private investigator Jay Joseph. As Eric wrote, Black has a knack for combining humor and action. It is a tightrope, but Black balances the two perfectly. There is a real sense of tension, while at the same time there are genuine, laugh out loud moments.

At its heart this movie is the oldest of Hollywood genre's, the buddy picture. Gosling and Crowe make a terrific team. Unlike Eric, I'm a fan of Gosling's work in both drama and comedy, but he definitely excels in this lighter role. His clumsy ineptness plays a big part in the humor and he handles the physical comedy with ease. He's the clumsy young puppy to Crowe's grizzled old dog, yapping at his heels and generally getting into trouble. Crowe gets the much less funny role, and he's definitely overweight and out of shape, but he still brings a believable edge to the part, as well as hinted at depths.

Although Gosling flirts a little (and with little success), there is no romance to speak of. The leading "lady" in the film is Holland's daughter, Holly, played by Angourie Rice. She provides the movie with its heart, softening Crowe's character and keeping Gosling's grounded. It's a nice little humanizing touch that never gets too sappy. However, the fact that Gosling is playing an alcoholic, neglectful father who's still feeling guilty and responsible for the death of his wife, is a touch of darkness that the film never really makes work. It doesn't quite balance the drama with the comedy as well as it does the action.

Like Eric, I would love to see a sequel. The summer season has just begun, but so far this is my favorite movie of the year.