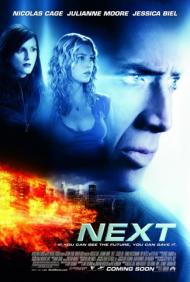 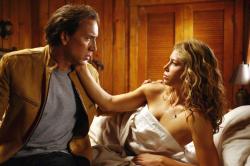 Nicolas Cage and Jessica Biel in Next.

Next isn't a great movie, but I enjoyed it anyway. It proves the point that you can be a bad movie and still have a sense of fun that can entertain an audience.

Nicolas Cage stars as Chris Johnson, a smalltime Vegas stage magician who really does possess the power to see the future. It's a limited power though, as he can only see up to two minutes ahead and only the future that affects him. Still, it's enough to help him win at blackjack.

The FBI, in the person of Juliane Moore's Agent Ferris, learns of Johnson's powers (although it's never made clear just how), and tries to enlist him to help them in tracking down a missing nuclear device, which a group of terrorists is threatening to detonate in the Los Angeles area. However, trying to get a hold of someone who can see you when you're coming, every time you come for him, is as difficult as it sounds and Chris is able to elude them with relative ease.

Chris is more interested in meeting up with Liz (Biel), a woman he's been foreseeing that he will meet for weeks now, which is odd because this is the only time he's ever seen further than two minutes ahead and he doesn't know why (and it's never explained). Despite the age gap and the fact that they've just met and despite her being really hot and he being odd and not very attractive, they're soon having sex and falling in love.

Since there wouldn't be much of a plot if the FBI never caught up with Chris, you can probably guess that they finally do. And seeing him use his power to help them go after the vaguely Eastern European terrorists is fun and imaginatively done.

My biggest problem with this movie, is its ambiguous ending. This is one of my biggest pet peeves when it comes to movies. You can leave the meaning of the ending open to interpretation, like with The Departed, but the actual storyline needs to come to a satisfactory conclusion. Having said that though, I must admit that this ending, while not concrete, didn't bother me as much as other movies that have ended without really ending, probably because this movie isn't really taking itself very seriously.

Next isn't a movie that you should try to over analyze. If you look too closely at the plot, you can find a few holes. And it's not so big and splashy that you need to see it on the big screen, but for b-movie fun, you could do worse than watching this one. 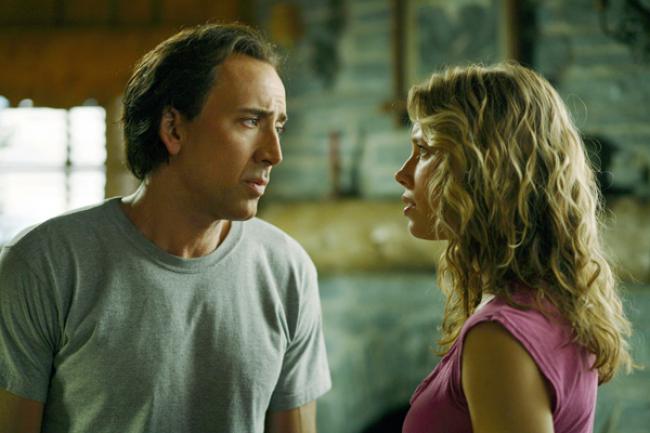 Nicolas Cage and Jessica Biel in Next

With a seventy million dollar budget, Next was a flop at the box office making only eighteen million dollars back in United States theaters. It is however, as Scott wrote, a decent mindless piece of “B” science fiction entertainment. The love story is weak but the pace and amount of tension and action is enough to keep you watching. One of the best action sequences being the chase down the hill while falling objects threaten to crush everyone. I was reminded of Buster Keaton racing a bunch of boulders down a hill in Seven Chances (1925).

I enjoyed the chases and the ease by which Chris moves through life. As Scott mentioned, he easily avoids or escapes from nearly any situation. As fun as that is, it raises far too many questions and as Scott also wrote, it is best not to think about anything in this movie but I will ask a few. Why does Chris live such a shitty life when he has such an amazing ability that could make him all the money he could possibly ever want? Why does agent Ferris think Chris’s ability to see two minutes into the future will be valuable in helping to stop terrorists from blowing up Los Angeles? What if the terrorists are three minutes away?

Somehow Liz affects Chris’s ability. Because of her, he can somehow see further into the future, especially after they have sex. Agent Ferris however, has no knowledge of that so, again, I wonder what she hopes to gain from someone who she thinks can only see two minutes into the future. Have you ever driven in LA? It can take two minutes just to drive two blocks in that town. Have you not seen Michael Douglas in Falling Down (1993).

I agree that Nicolas Cage has a sort of awkward charm but he is by no means a leading man. Not only is Cage eighteen years older than Jessica Biel but his looks are average, at best, and writing that kind of feels like I just insulted average looking people. Biel is meanwhile gorgeous as hell, especially in the scene where she is laying under the sheet. See the picture in Scott's review. She is like Marilyn Monroe who did a similar pose in Niagara (1953).

Next has a level of fun about it but too often it takes itself far too seriously. Does this line, “Here is the thing about the future. Every time you look at, it changes, because you looked at it, and that changes everything else.” Make any sense? Then again, who cares? Just accept this film on face value and you may find yourself enjoying it.