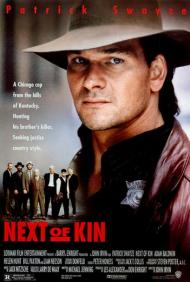 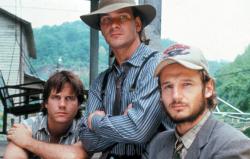 Bill Paxton, Patrick Swayze, and Liam Neeson play brothers in Next of Kin.

Next of Kin is a 1980's crime thriller that pits Appalachian hillbillies against big city Italian-American mobsters. Patrick Swayze, Liam Neeson and Bill Paxton are the three Gates brothers from the rural Kentucky hills. Swayze is now a cop in Chicago. His younger brother Gerald (Paxton) has just come to town to find work. On his first day on his new job as a truck driver Gerald is murdered by the sadistic nephew of the head of the Isabella crime family. When this news reaches Kentucky the third Gates brother Briar (Neeson) comes to town to exact revenge hillbilly style. Things keep escalating until a full scale war between the two groups begins.

This movie revels in stereotypes. Neeson, Swayze and Paxton all overdo their hillbilly accents, with Paxton being the most guilty. Neeson slips into an Irish brogue on more than one occasion. But he does a decent job in a part that has him saying lines like, “This land's mine!...I can go out and take a piss on it in the middle of the night if I want to!” And “My name is Briar Gates and I want the man that kilt my brother.”

The big city mobsters are just as stereotyped. I mean why are movie gangsters always portrayed as Italian-American?

Look for several soon to be famous faces in supporting roles. Helen Hunt has the rather thankless role of Patrick Swayze's violinist wife, and a baby-faced -and rather awkward- Ben Stiller plays the son of the head mobster. Michael J. Pollard (best remembered for his role in Bonnie & Clyde) plays the owner of a flophouse who gets involved in the feud after Briar Gates moves in.

Director John Irvin shot Next of Kin on location around Chicago and in Kentucky. This gives the movie a certain degree of authenticity even though the plot is as formulaic as they come. The “surprise” ending can be seen coming a mile away. The movie does try to draw a parallel between the hillbillies and the Sicilian mobsters in terms of family loyalty and position in society. One of the mobsters derisively mentions that the hillbillies “farm rocks”, the head mobster comes back with, “That's what they used to say about us in the old country.”

Despite its memorable cast, Next of Kin is just a run-of-the-mill revenge action flick. 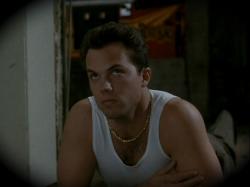 Patrick, the reason movie gangsters are always portrayed as Italian-American is because everyone knows the darker your hair the more likely you are to commit crimes. The fair haired and brown haired are the heroes, as long as you do not count Aryan Nazis, while the black haired are the criminals. Van Johnson, Brad Pitt and Matt Damon do not play the bad guys. Robert Redford's hair is intended to mislead us when he played the bad guy to Chris Evan’s blonde Captain America.

Of course, the greatest Hollywood hero of all time is the incredible Patrick Swayze and his long flowing dirty blonde locks. He exacts revenge here with his Beretta and arrows, taking down one dark haired stereotypical mobster at a time. It is not nearly as exciting as when he beats up the dark haired jerk in Dirty Dancing or when he chased down the dark haired ethnic looking murderer in Ghost but it will do.

The climax of the film involves a chase and a battle to the death in a cemetery of all places. Talk about some brilliant symbolism! Patrick runs from tree to tombstone collecting weapons he had previously hid there. It is not only important to be well coiffed but also prepared for just such a shootout. You never know when the silence of a crossbow may come in handy.

My favorite part of the entire battle is when his redneck cousins show up and they identify each other with bird calls. It is an all-out gun battle between suit wearing dark haired men and blue jean wearing hillbillies. A loud, “Over here!” would have worked just as well. I doubt anyone is mixed up on who to shoot at.

I started this review with as much sarcasm as I could muster. After all this is a Patrick Swayze movie and I always had a hard time taking him seriously. The guy acted through his torso. The only time he gave his characters any personality was when he took his shirt off.

Next of Kin is a fast paced, bloody action film that is good for a laugh, even if it was not intended as such. Any film that has Ben Stiller as a bad guy has gone camping. If you can take this film seriously, you are either a 12 year old or have the mental capacity of one.