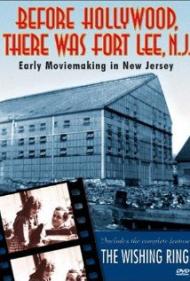 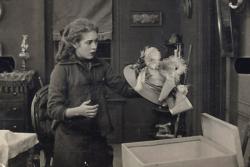 The New York Hat, produced in 1912 in Fort Lee, NJ, is a high quality early silent film with a solid pedigree.  Directed by D.W. Griffith, written by Anita Loos and starring Mary Pickford and Lionel Barrymore with Lillian Gish appearing in a bit part.  Although only around 15 minutes in length, it manages to tell a complete story and is easily the best non-comedy silent short that I've seen.

The story opens with the death of Mrs. Goodhue.  Her final wish, put down in a letter to the minister (Barrymore) is that he should spend the money that she managed to save on "a bit of finery" for her daughter Mollie (Pickford), but with the stipulation that he keep the source a secret.  When he buys Mollie a brand new hat from New York, they both instantly become the talk of the town as the gossips wonder just why the minister is buying expensive gifts for Mollie.

Perhaps the best thing about this short is the natural acting style.  Too often in silent movies, especially early silents, the acting is so heavy-handed and overly dramatic, but here most of the acting seems modern and completely natural.  You could add sound to it and it wouldn't seem odd at all.  Pickford and Barrymore in particular show why they would become stars with their ease in front of the camera and their ability to show what they're thinking with their eyes and simple gestures.

Likewise Griffith's directing style is modern in its efficiency.  He conveys this short story with economy and good pacing.  It's easy to see why he was one of the giants of the early days of movies.

This was the first movie to be produced with a script (or scenario in this case) by the prolific Anita Loos.  Most famous for Gentlemen Prefer Blondes, Loos would go on to be one of the hardest working writers in Hollywood, churning out scripts and polishing dialogue through the teens, 20s, 30s and into the 1940s.  She was paid the grand sum of $25 for her scenario on this film.

It's amazing to think that this movie was produced the same year that the Titanic sank.  What's even more amazing is how well the story holds up.  There were gossips and busybodys then and they're still around today. 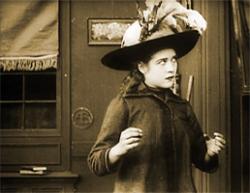 Mollie tries on the hat.

I agree completely about the natural acting. Notice the facial expression on Barrymore’s face when he first reads the note left by the dead mother. The little chuckle he gives is perfect. And Pickford breaks your heart in the scene after her father ruins her new New York hat.

The combination of Griffith directing and Loos writing the scenario proves a good one. The emotional arc is perfectly handled. The quality of this movie and the production values are excellent as well. Besides Lillian Gish, Mae Marsh would also go on to become a star in her own right. Here she plays one of the gossips; the pretty one.

Many people today don’t realize that the movie industry began on the east coast. Mary Pickford’s fame predates Hollywood. She was already the world's first international movie star by the time The New York Hat was released but the future movie capitol didn't become a household name until around 1914.

The New York Hat stands the test of time in that it hasn’t lost its power to convey emotion. A group of gossips can just as easily today turn into an angry judgmental mob as they could in 1912. 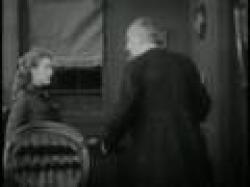 What is she hiding behind that chair?

This is a nice little film, that shows just how little exposition or dialogue, you need to tell a complete story.  The fact that this plot revolves around a rumor of an affair is made all the more interesting when you notice that Pickford looks pregnant.  Her bosom looks full, and she wears a baggy top. The real give away is her posture.  She definitely carries herself in a manner befitting a woman with child.  Several angles are shot to hide to stomach.

According to Wikipedia, Pickford married silent film actor Owen Moore on January 7, 1911. "It is believed she became pregnant by Moore in the early 1910s and had a miscarriage or an abortion. Some accounts suggest this led to her inability to have children."  The time frame fits the making of this film.  She later adopted two kids with her third husband.