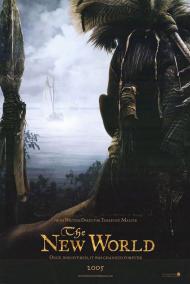 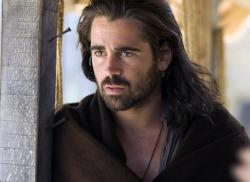 Colin Farrell in The New World.

The New World is one of the most boring movies of the year. Oh, you can call it art if you want to and you can accuse me of having lowbrow taste for not appreciating it, but that doesn't change the fact that this movie is about as entertaining as a nice view from a country hotel. It's pretty to look at, but you wouldn't want to stare at it for over two hours.

To its credit the film tells the story of the first English settlers in North America and their encounter with the natives in a realistic manner. The living conditions and the struggle to grasp a foothold in this virgin wilderness are shown as the struggle it undoubtedly was at the time. There is no romanticizing about life in The New World as there has been in so many other stories about this period.

Colin Farrell plays John Smith, one of the early settlers who is captured by a tribe of Indians and saved from certain death only by the intervention of Pocahontas (played by first time actress Q'Orianka Kilcher, who does a fantastic job). The two fall in love but their time together is short lived as Smith soon returns to the English colony where things are falling apart. Pocahontas again saves him and his people by urging her tribe to bring the colonists food during the winter. And she saves them yet again by warning them of an impending attack by her people. This last act causes her father, the chief, to exile her from the tribe and eventually she ends up living in the fort where the English give her refuge in the hopes that the Chief will call off his attacks lest his daughter is killed during one of them.

While all of these goings on might sound exciting, all of the action is interspersed with looooooooong moments of silence. If you trimmed every scene in the movie where nothing happens, the movie would be about half as long as it ended up being. And again, I know some people will say it is director Terrance Malick being artistic and hey, if that's what you enjoy then good for you. Personally, I go to the movies for the story and the characters, not to see long lingering shots of trees and grass blowing in the wind.

Farrell, who is supposed to be a man of action in the film, spends most of his time moping about Pocahontas. He loves her, but he can't take her with him back to England. Ok, we get it. Now stop blubbering about it and get on with your life. His final solution to their relationship is cold and unfeeling and goes against his stated feelings.

The story never quite comes together in the film. The second half of the film doesn't really flow well with the first half. There's not one over-arcing plot device that carries throughout its length. Who's the central character? John Smith? Pocahontas? John Rolfe? Little things like a script and story clearly take a back seat to visuals in this movie.

Malick certainly has a visual eye, but perhaps if someone else had written the script the movie as a whole would have been much better. 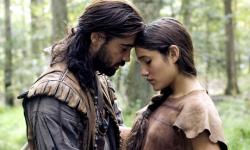 While I agree with Scott that the pacing is a bit on the slow side and perhaps there are a few too many shots of Smith and Pocahontas standing in a field staring longingly into each other's eyes, nonetheless I was able to enjoy the movie as a whole. It is certainly beautifully shot and as mentioned above does show a realistic version of the first permanent English settlement in America 400 years ago.

Reading Scott's review however, would lead you to believe that there is no action or excitement in the movie at all. There are in fact several rousing action sequences and one very good battle scene when the Native American's attack the fledgling settlement. Malick handles these scenes with a sure hand.

I never found the movie boring but I do think it's a bit uneven. The realism is marred by the highly romanticized relationship between Smith and Pocahontas. During their scenes in the swaying grass making goo-goo eyes at each other, I half expected to hear Disney's 'Colors of the Wind' start playing in the background.

In the end though the story is really hers. After she believes Smith to be dead, she accepts the marriage proposal of John Rolfe, bears him a son, and eventually moves to England with him. The young Kilcher is brilliant in the part. She is mature beyond her years and carries the movie very capably on her 14 year old shoulders.

No this isn't "The Masterpiece" it would seem the director was trying to make, but it is not the absolute bore Scott claims either. The fact is The New World lies somewhere in between.

Terrence Malick is my least favorite type of director. He cares more about the look of the film than the actual story line. He is a cinematographer pretending to be a director. He puts too much of his vision into the movie and as such, gets in the way, and slows down the story. He is in love with the scenery and the setting, but he forgets that the characters are what this story is about and not the background.

The love story of Pocahontas and her two Johns could be great cinema. It has many exciting elements; adventure, discovery, action and love. Malick minimalizes the adventure and the only discovery he leaves in is the blossoming affection Pocahontas has for Smith, but that he drags out to nauseam. The action only occurs a few times and then it seems rushed. The love story is cold. Pocahontas and Smith frolic and walk through the woods and fields but they rarely actually speak. This story never even says if they have sex.

I enjoyed the lesser known love story of Pocahontas and John Rolfe. He falls for her and saves her from the depression that Smith left her in. The most engaged I felt for any of these characters was when Pocahontas tells Rolfe that, although they are married and she bore him a son, he can no longer touch her, as she has just discovered that Smith is still alive and thus she still belongs to him. However, the movie spends more time on Pocahontas and Smith doing nothing than it does on Pocahontas and Rolfe, who traveled half way around the world together and were married for a much longer time than Pocahontas ever was with Smith.

Malick is the kind of director who makes movies that he likes. No doubt he is proud of the beautiful shots of the storms, sunsets and swaying weeds. Perhaps he should work for the National Geographic and let film makers who make entertaining movies do such movies as this.