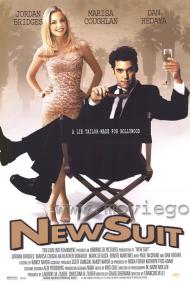 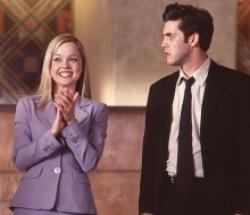 Remember the story of the Emperor's New Clothes? How the Emperor commissioned a new suit and was told that it was invisible and all the people of the kingdom ooh-ed and ah-ed over it, until a small child said that the Emperor was naked? Well, New Suit, is a modern retelling of that story, only in this version the set of clothing is a non-existent script titled New Suit and the Emperor is a high-powered movie executive.  Featuring a cast of mostly unknowns, it manages to wring a few laughs and some enjoyable moments without really taking off in its satiric look at Hollywood's obsession with the next big thing.

Kevin Taylor (played by Jordan Bridges who appears to be David Schwimmer and Fred Savage's love child) is an optimistic, wannabe screen-writer who accepts a job as an assistant to past his prime, movie executive Muster Hansau (Dan Hedaya who used to play Carla's husband on Cheers).  After 18 months Kevin has become as cynical as anyone in Hollywood and given up on ever becoming a writer.

Over lunch with some friends from rival studios (one of whom is played by Danny Strong, Jonathan on Buffy: The Vampire Slayer), Kevin, tired of hearing about the next big script, just happens to mention a hot new property 'New Suit'.  His friends, scared of being out of the loop, all pretend as if they too have heard of the script.

Having only intended it as a joke, Kevin is surprised when suddenly everyone begins taking it seriously, including his boss who sends his minions scurrying out to buy the script from its fictional author; Jordan Strawberry.  Even Kevin's ex-girlfriend Marianne, a talent agent, comes around to his apartment in an effort to find out about the script.  When Kevin jokingly tells her that he knows that Jordan Strawberry isn't represented by anyone, she immediately begins making deals on his behalf, assuming that once she has a deal in place, the elusive author will show himself.

Eventually Kevin admits the truth to Marianne and she concocts the plan of using one of Kevin's old scripts and going ahead with the deal.  Kevin, however, is playing both the Tailor and the honest little boy in this story and can't quite go along with the whole deal.  Despite his honest streak, he quickly learns that telling the truth in Hollywood isn't as easy as he thought.

The movie does generate a few laughs and the cast is all likable enough, but in an area so ripe for satire, much more could have been done.  For a better look at a similar subject, there's always Robert Altman's brilliant, The Player.  Still, for those with an interest in Hollywood and how deals happen, New Suit is entertaining enough.