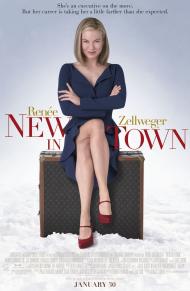 From Michael J. Fox in Doc Hollywood, to Reese Witherspoon in Sweet Home Alabama, to Diane Keaton in Baby Boom, Hollywood seems to love to throw a city person into a small town locale, in hopes that the fish out of water jokes will come fast and easy. Renee Zellwegger travels that familiar path in New in Town, but the laughs are scarce.

Corporate executive Lucy gets the job of spending the winter in Minnesota. Her Miami based corporation is transitioning a factory over to a new product. She is to see to the changes, as well as cut half of the work force. Lucy is given no back story. We learn nothing about her past.

In usual Hollywood tradition, all of the small town folk are quaint and, other than one rude waitress, very pleasant. Lucy is clueless about the climate and such things as a real fireplace. She thinks they all work with a switch. She falls for the local union representative Ted, even though they are at odds about the downsizing.

Siobhan Fallon as Blanche Gunderson steals every scene she is in. Granted, this movie is not that good, so that is not really much of a compliment. When Lucy first meets her, Lucy asks if she is her executive assistant. Blanche has no clue what that means, but informs her that she is her secretary. My favorite line involves Blanche keeping her tapioca recipe from her friend Trudy.

Ted is a widower, with a teenage daughter. Lucy and Ted share one interesting moment when they get into an argument at a dinner party. After Lucy tells Ted's daughter how she once saw Fergie in Miami, they get into a heated debate over how a girl should present herself. It is the only real moment in the entire film.

New in Town has several cute moments, but not too many actual funny ones. The movie ends on a very sappy note that I saw coming, but was hoping to avoid. If you have seen Doc Hollywood or Sweet Home Alabama or Baby Boom you already know how it ends. 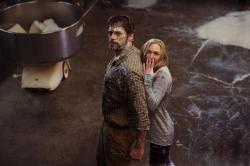 Harry Connick Jr. and Renee Zellwegger in New in Town.

Sometimes sappy can be okay and in this instance I didn't mind it so overly much.  Sure this is no great shakes of a movie, but the cast does its best with the limited material and no one embarrasses them self.  It's not as if it's making a bunch of jokes that aren't funny, it's simply aiming more for sweet than hilarious and pretty much achieving its goal, even if sometimes it surpasses it and becomes too sweet for its own good.

We do actually learn a little bit about Lucy's past.  Her father was a maintenance man in a factory who drilled into her a need to succeed.  It's not a detailed past, but it does provide a motivation for her actions.

Some of Lucy's behavior at the beginning of the movie makes little sense.  The script tries to make her seem out of her element, but I have a hard time believing that someone who reached her level of success wouldn't think to check the weather report before she went there and then dress accordingly.  She also, at first, shows so little tact that again I have to question how someone with so limited personal skills could have risen to such a position of responsibility.  Obviously they make her act that way for the "jokes", but since they're not that funny, it's hard to see why they bother.

Connick does an okay job in the thankless boyfriend part even if the beard doesn't do him any favors and he loses at least half his charm by dropping his southern accent.  This is definitely a movie for the women though and the scenes between Zellwegger and Fallon are more meaningful than the scenes with Zellwegger and Connick.

True, you won't see much new here, but with low enough expectations there's some mild entertainment to be had. 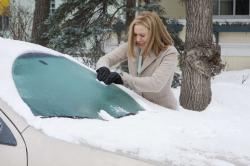 Renee Zellweger and lots of snow in New in Town.

Exceedingly mild entertainment though Scott. New in Town is completely derivative of other romantic comedies. It borrows plot devices liberally from the movies Eric mentioned but also emulates Frank Capra's homespun comedies of the 30s. Although Zellweger is no Carole Lombard or Jean Arthur and Connick no Gary Cooper or James Stewart. At any rate there isn't a lick of originality in this sucker.

What in hell happened to Renee Zellweger's face? It was always a bit on the round, chubby side but now it looks like a blow up doll and her beady little eyes have all but disappeared. Her line delivery and comic timing are fine but I was distracted by her constant squinting and pouting.

As for Harry Connick Jr. what can I say except he should stick to singing. Oh he handles light comedy well enough and possesses the charms of a leading man but he is pretty wooden in the one big dramatic scene he has where he tells Zellweger about his dead wife. Scott, he didn't drop his accent completely. In fact he mentions to Zellweger that his character was originally from the South.

I did enjoy one sequence though. It is when Zellweger gets stranded in a car in a snowdrift along the side of a road. She uses a red nightie as a flag on the car's antenna and then passes the time by getting drunk. Of course she is rescued by the film's leading man who digs her out of the snowbank and tries to help her to his truck. She refuses his help, stumbles proudly on her own two feet, sings one line of “I Will Survive” and falls face first in the snow. It is Zellweger's best moment in the entire movie. She proves her talents include taking a decent pratfall.

Like my brothers I too enjoyed Siobhan Fallon's performance as the sweetly naive Blanche Gunderson. The script pokes gentle fun at her scrapbooks and Jesus talk, but never in a mean spirited way. Fallon provides the movie with whatever heart it manages to convey.

This by the numbers rom/com has already been quickly forgotten. Which is just as well since nearly everything about New in Town was old the day they started writing the script. I will say it's not a bad choice for a movie to watch in the middle of a summer heat wave. Those blasts of arctic air and piles of drifted snow look downright refreshing when it's 100 degrees outside.