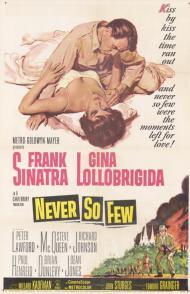 Frank Sinatra and Steve McQueen in Never So Few.

Director John Sturges is best known for two movies, The Magnificent Seven and The Great Escape. Both films feature Steve McQueen and Charles Bronson. However, the first time these three all worked together was in Never So Few.

Frank Sinatra's Captain Reynold's leads a detachment of the U.S. Army's Office of Strategic Services (OSS), in World War II Burma. They fight along side the local Kachin tribes people against the advancing Japanese Army. After a fire fight, Reynold's and his second-in-command Capt. Mortimer fly back to HQ to petition for a doctor and medicine for the wounded. He also squeezes in some R&R. He meets and falls for Carla who is a kept woman of a wealthy man. He recruits His assigned driver, Ringa, who runs an illegal still, and occasionally fights with M.P.s. He also recruits an unwilling doctor, Capt. Grey Travis. The rest of the movie has Sinatra bopping back and forth from fighting in the jungle to romancing Carla.

Never So Few opens very weakly with Sinatra sporting a goatee. He thankfully shaves it off before too much screen time has passed. The action is short and sweet and then there is far too much dialogue and melodrama. The movie gets better as Sinatra romances Lollobrigida. Hanging out in a night club or at a black tie party with a beautiful woman seems far more comfortable for Sinatra than playing a tough as they come soldier. The movie also gets a jolt from the always amazing McQueen. This guy never needed dialogue. His best scenes are when he just does something. Watch him when he gets caught drinking and beats up the MP's. The guys is very animated in a very cool as James Dean way. The action scenes also improve as the movie progresses.

The most notable thing about Never So Few is it's all star cast. It is just to bad that this is not any of their's best movie.