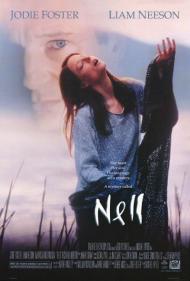 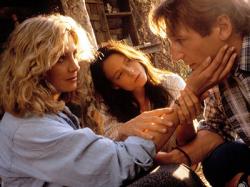 Nell is the story of an isolated backwoods woman (Jodie Foster) discovered living in a cabin in a remote area of North Carolina, after her mother's death. She was raised alone by her hermit mother and speaks a sort of mangled English. The kindly small town doctor (Liam Neeson) who first discovers Nell cowering in the cabin, and the pretty young psychologist (Natasha Richardson) that assists him in trying to help her, both assume Nell to be mentally retarded. As they grow to know her better they slowly come to realize she actually possesses a simple wisdom as well as harboring a few secrets.

Jodie Foster gives an impressive performance as Nell. She also served as a producer and at one time considered directing what was clearly a highly personal movie for her. The language Nell speaks sounds like complete gibberish at first. It's a testament to Foster's acting talent that as the story goes along you find yourself beginning to understand Nell. She is very expressive with her face and makes sweeping hand gestures as she speaks. “Like t'ee in the way!” Translation: “Like tree in the wind.”

Nell was a child of rape and consequently her mother taught her to fear all men. She sleeps in the daytime and ventures out of the cabin only at night for moonlight swims in the nearby river. Jodie Foster does several nude scenes and shows off a very toned body.

Liam Neeson and Natasha Richardson were married the year this movie was made. Their love is palpable in their many scenes together. Both give wonderful performances. Neeson makes a difficult role seem effortless. The manner in which he communicates with Nell seems completely spontaneous and believable. Richardson shines in several scenes. Watch how natural and heartbreaking she is when she tells her mother's story to Neeson's character. It is a masterclass in conveying emotion without overdoing it.

There is a compelling sequence where Jerome and Paula take Nell on her first trip into town. Watching Nell encounter a tiny portion of the larger world is fascinating. This is a woman that grew up without such modern conveniences as running water or electricity. She had never even heard music until the day Jerome plays a recording of Patsy Cline's “Crazy”.

The climax takes place in a courtroom where Nell's fate is to be decided. This is the one scene that doesn't ring true. It becomes a sappy Hollywood movie. Nell, who up until this point in the story had never managed to communicate more than the most rudimentary of thoughts and feelings suddenly waxes philisophical while Jerome translates for the judge and courtroom full of curious townspeople. Among other things she tells her captive audience, “You have big things. You know big things. But you don't look into each other's eyes. And you're hungry for quietness.” This scene is so clearly designed to evoke an emotional response from the audience that it seems contrived. Especially since Nell was in a nearly catatonic state in the previous scene.

Despite this predictably corny last minute reveal of Nell's true intelligence, this is an interesting and entertaining story. It was shot on location in the wilds of North Carolina and features some breathtaking cinematography. The solid performances of the three stars contributes much to the movie's appeal. Despite a few flaws in the script Nell is worth watching for the superb acting on display and for the wonderful Natasha Richardson, a star that died before her time.