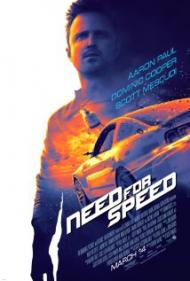 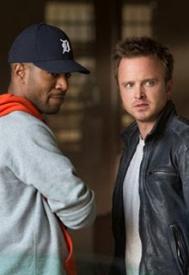 Scott Mescudi and Aaron Paul in Need for Speed

I wonder who thought to make a movie based on a racing video game? I wonder because of just how bad of an idea it truly was. A race has a beginning and an end. There really is only one outcome. It is not exactly the making of a great drama and Need for Speed is about as far from being a great drama as they come.

Tobey is a late twentysomething who owns a garage in which all of his friends seem to work at for the fun of it. Their hobby is street racing. Enter former classmate and very wealthy Dino. He takes Tobey and Pete, Dino’s fiancé’s little brother and Tobey’s best friend, to see Dino’s Uncle’s European race cars which are illegal to drive in the streets of the United States. Of course they decide to race them on public roads to make up for a previous race that Tobey won from Dino.

Baby-faced Pete gets killed when Dino’s car taps the back of the car Pete is driving. Oh come on! I knew Pete was wearing red the moment his sister thanks Tobey for watching out for him in an earlier scene. You could call it foreshadowing but I think of it more as bad writing.

Dino claims Tobey and Pete stole the cars and that he was somewhere else entirely. Tobey must have had the worst lawyer in the entire world as the three cars passed many other cars on the road to Pete’s death and no one apparently ever thought to find those witnesses. Anyway, Pete gets buried and Tobey goes to prison for two years.

When Tobey gets out he plans to get revenge by winning a race against Dino. Tobey breaks his parole and countless laws driving across country from New York to California, with a stop in Detroit. In California he commits more traffic violations; some endanger innocent bystanders and police. He steals a car and enters the illegal street race. During the race, police cars get destroyed and, for all we know, police officers get horribly hurt or killed.

Why exactly am I supposed to root for Tobey? Dino left the scene of an accident and broke traffic laws while Tobey committed just as many, or more, crimes. Did Tobey stop whenever a police car flipped over? I didn't care if Tobey won, lost, lived or died. He is nothing but a menace to society. Did teenage boys write this movie?

The one and only aspect of this film worth watching is to see the hot cars, and these are some hot cars. In fact, it comes really close to being a two hour car commercial. The hero drives a Ford Mustang through much of the film. I wondered how much Ford invested in this movie. At one point, some baddies are trying to stop Tobey and his Mustang. The bad guys are driving a Chevy.

Aaron Paul actually does a great job of acting; unfortunately, this film is so bad that it hardly matters. Need for Speed is for car enthusiasts and video game loving teenage boys only. If you want even a modicum of wit or decent writing, look absolutely anywhere else.