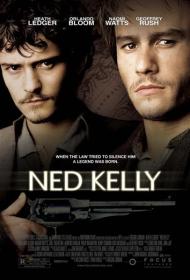 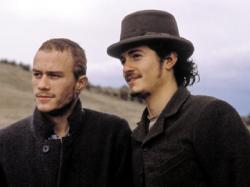 Apparently, I'm just not up on my Australian history, because I have to confess that until I saw this movie I knew nothing about Ned Kelly. After watching, while I definitely know more than I did, I'm not convinced that I know his full story. The story presented here, while entertaining, is very one sided in its view of history. It leaves us no doubt that Ned and his gang were the good guys and everyone against them was bad. And whenever someone goes on about the purely good versus the completely wicked evildoers, I know that I'm not getting the full story. However, this didn't prevent me from enjoying this Australian Western, thanks in large part to its leads, Heath Ledger and Orlando Bloom.

The plot revolves around the Kelly family. Ned (Ledger) is the son of a deported Irish convict. At the beginning of the movie Ned is falsely arrested for stealing a horse and sent to prison for three years, thus starting the animosity between his family and the British police that will last throughout the film.

Upon his release from prison, Ned tries to remain upon the straight and narrow path, but when a local constable becomes attracted to Ned's sister, trouble rears its ugly head once again. The policeman, after being humiliated at the Kelly house when he comes to see Ned's sister, tells everyone that Ned shot at him. Despite the obvious lie (Ned wasn't even home during the incident), Ned and his friend Joe (Bloom) decide to hide out until the whole business is forgotten.

In an effort to get Kelly to turn himself in, the police arrest Kelly's mother and many of his friends. After a gun battle during which Ned shoots two policemen, he knows that turning himself in would be as good as committing suicide. Instead, he becomes the outlaw that the law has already made him out to be. He robs several banks, gaining popularity from the masses that cheer his disregard of the ruling classes' authority.

Wishing to stamp out the outlaw and his gang before it can turn into a revolution, the British government issues a huge reward for their capture and Queen Victoria signs a law stating that anyone who sees Ned or his Gang, may shoot them on sight with no questions asked. A large army of policeman is also gathered together and sent after the small group of outlaws. In some ways, the story is reminiscent of Butch Cassidy and the Sundance Kid. Two outlaws being chased across the country by their pursuers. How it differs is in its mood. Butch and Sundance was lighthearted and humorous at times, while Ned Kelly only occasionally shows a spark of humor. Ledger and Bloom, both good actors, also lack the chemistry of Redford and Newman.

Apart from Bloom and Ledger, the rest of the cast is vastly underused. Both Naomi Watts and Geoffrey Rush have very small parts with very little character development. Almost anyone could have played his or her part.

In the end, Ned Kelly is an entertaining, action adventure, but that is all. If it were filmed more as a fantasy adventure, a sort of Australian Robin Hood, then the one sided nature of its story would have worked. But since it is filmed with a somber tone and in a realistic manner, it begs for deeper answers, but never provides them.

As I watched Ned Kelly I was reminded of Bonnie and Clyde. Both movies have criminals who become folk hero to the poor. The difference is that Bonnie and Clyde are portrayed as well rounded characters who willingly pursues their life of crime and in the process become respected by the downtrodden. Ned Kelly and his gang are portrayed as innocent men completely pushed into their life of crime by a corrupt system. Some of that may be true but these guys were in fact law breakers.

Like Scott, I felt this movie did not tell all sides to the story. The policeman, who likes Ned's sister, comes to visit the family for no apparent reason other than to harass them? Did she actually like him? Did she lead him on? Risking getting his ass kicked to see a girl who does not like him makes no sense. Another plot hole is when Ned asks his married lover to go to the police and say that she was with him to prove that he could not have possibly shot the police man. She says she couldn't because it would break up her marriage. Hello! She does not have to say that they were having sex. All she could have said was that Ned stayed late to clean the stable or some other such lie.

This movie goes to such an extreme to show Ned as a "good" bad guy that when he first shoots and kills someone it is shown as a last ditch effort after warning the guy several times to stop or he will shoot. Even after Ned shoots him he cries over the guy telling him he would not have shot him if only he had stopped. Thus the movie insinuates that it is the victims fault for running away and shooting back and not Ned's.

Bonnie and Clyde showed how two people start a career in crime and then get carried away by the very crime wave that they created. This movie wants so desperately to canonize Ned Kelly that it never stops to consider that maybe he has some responsibility in the fact that he chose to rob banks.