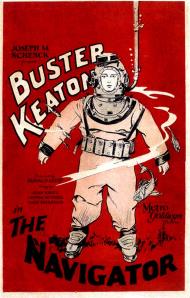 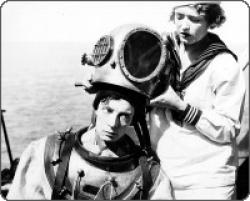 Buster Keaton and Kathryn McGuire in The Navigator.

A common trend in movies has always been to make fun of rich people. They are often shown as bigots or extremely conservative or just plain helpess and dumb without their servants to provide for them. Silent films, like The Navigator, helped create this stereotype.

Wealthy and spoiled Rollo and his girlfriend Betsy, who refuses to marry him, end up on a yacht, The Navigator, adrift in the middle of the ocean. Neither has a clue about how the ship works. They basically learn to make a life for themselves, eating what food is onboard until they drift to an island full of cannibals. After some antics involving repelling the cannibals from boarding the ship they get rescued by a submarine.

The jokes are all slapstick and work for what they are. Today, only a child can laugh at some of these antics. My 10 year old has developed an appreciation for this kind of comedy. He also likes The Three Stooges.

Whereas I do not find myself laughing as much while watching Buster Keaton I do always find myself admiring his work. This has got to be one of the first films to have an extended scene under water. In it he sword fights with a sword fish, using another sword fish as a sword.

The Navigator moves along quickly, full of pratfalls and chases. The pace is done well enough but the movie lacks any sort of heart that some of his other films had. The movie starts with Rollo proposing to Betsy and her turning him down. The movie should have ended on some note that returns to that question but it never does.

The Navigator is worth watching if you're a Keaton fan but it is not his greatest work. 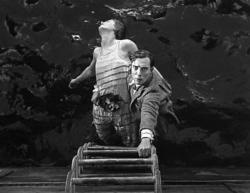 Kathryn McGuire and Buster Keaton in The Navigator.

This common trend you mention Eric, of poking fun at rich folks, is not something new the movies created. Audience members during the silent era did not think, “oh, look at this new idea the movies have of lampooning the wealthy”. Instead they would have immediately recognized it as merely the continuation of a long standing tradition from the stage and literature dating back hundreds of years.

That said I completely disagree with your review. This is Keaton at the very top of his game. The sight gags come fast and furious and never let up. The energy and pacing are definitely of the Jazz Age. Kathryn McGuire plays Betsy as a flapper and looks adorable in her little sailor suit. She has a real sexual spark with Keaton. Watch the scene where he carries her up the ladder on the side of the ship (see photo above). Later she uses Keaton, in his sea diver gear, as a makeshift vessel, straddling his torso and using a paddle to row him back to the ship. There is a lot of suggestive physical contact going on.

The most famous gag from The Navigator is the one where Keaton gets his foot caught on a rope tied to a small cannon whose fuse he has just lit. No matter where Keaton moves or dodges around he cannot get out of the cannon’s line of fire. He stumbles effortlessly and humorously around the deck of the ship before finally managing to extricate himself. It is a masterful example of his physical grace and comic dexterity.

The underwater scenes are impressive and imaginative. The story builds quickly to an exciting climax. In fact this is a nearly perfect silent comedy and an example of a true artist at the very peak of his talents. PS, Eric, I think it is implied at the end, with Betsy in her hero Rollo’s arms, that they will now get married. 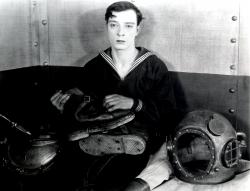 Buster Keaton in The Navigator.

With three times the running time of one of his shorts, there should have been three times the jokes, but there's not. In fact at times this feels more like a comic adventure tale rather than an all out comedy.

Not that there aren't some very funny moments in it. Keaton once again proves that when it comes to physical comedy, he was the very best. He had such a boundless energy. How did he do so much running about while being such a heavy smoker? Patrick, I loved the cannon bit you mention. The first night the two spend onboard the ship is also comical as they cluelessly try to find a place to sleep.

An early title card gets a laugh when it describes Keaton as "Living proof that every family tree must have its sap." Although a later one is a bit of a dated joke when it says, "Going on a honeymoon without a bride is like singing the words of 'Kiss Me Again' to the music of 'Alice, Where art Thou'." I get the intended joke, but I assume those were popular songs of the era.

Some of the scenes do run a bit long. The underwater scene is impressive, but apart from the swordfish duel not all that funny. Some jokes are even recycled from Keaton's earlier work. The scenes in the kitchen where all of the gadgets and things are strung up by string was done by Keaton in one of his shorts.

It's odd seeing Keaton play a rich person when he so often played the down on his luck scamp. His character here even has a name, where in his shorts he was almost always known as Buster. One other odd thing that stood out to me is how you can notice how much pale makeup he was wearing for filming. When he puts his hand to his face, the contrast in the skin tone between his bare hand and his madeup face is startling.

I wouldn't call this Keaton at the top of his game. It's still enjoyable, but he's done better.