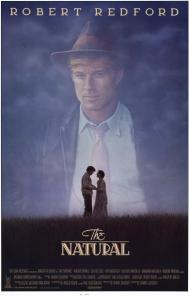 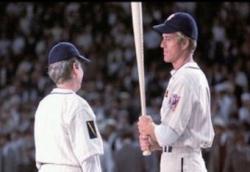 Robert Redford in The Natural

I always liked to listen to Detroit Tiger  announcer Ernie Harwell tell some old story from baseball days gone by.  They were always simple little stories about the mystique and love of the game.  The Natural is a romantic baseball fable that will warm the heart of anyone who loves Americas past time.  I have been meaning to see it for years and am I glad I finally did.

Roy Hobbs grew up on a farm playing catch with his dad.  One day his dad has a heart attack and dies under a tree.  Later, that tree gets struck by lightning and Roy makes himself a baseball bat out of it, naming it Wonderboy.   After high school he gets a try out with the Cubs.  On the train ride to Chicago he meets a woman and his destiny changes.

Sixteen years later Hobbs gets another chance at baseball playing for a losing New York team.  The moment he walks into the dugout carrying Wonderboy, the manager says to him, "People don't start playing ball at your age, they retire!"   Hobbs is a man still chasing a dream he started having years ago in a country field.  "My dad wanted me to be a baseball player."  He tells a coach.

After riding the bench for awhile, Hobbs finally gets a chance at bat.  He and Wonderboy impress everyone from his first at bat.  His team starts winning, and Hobbs soon replaces the teams star player in right field and in his girlfriend's bed.

Three woman play an integral role in Hobbs's life.  Iris was his high school sweetheart who supported his baseball dreams from the beginning.  They made love in a barn the night before he got on the train to Chicago.  The second is the woman in black he met on the train who shattered those dreams.  The third is Memo, the team's whore.  As soon as she and Hobbs start their affair he goes into a hitting slump and the team starts losing again.

During one such losing game in Chicago, Hobbs catches sight of Iris among the spectators as she stands in support of Hobbs at bat.  He of course hits it out of the park.  During the night they spent together, Hobbs promised Iris a future with him, but after meeting the woman in black, he never saw Iris again, until that day at the game.  They reconnect as friends and Hobbs learns that Iris has a son, but she is not married.  She tells him that her son does not see his dad often as they live in Chicago and he lives in New York.

Hobbs is now playing well again and so is the team.  However, there are politics going on in the offices involving ownership, and some very wealthy people do not want Hobbs and his team to win.  Memo works for these people and acts as bad luck for Hobbs.  She is the opposite of Iris.  She is played by Kim Bassinger made to look like Marilyn Monroe.  If the baseball field was Eden, Memo would be the snake.

The ending has all of the excitement you could possibly find in a sports movie.  Hobbs is in bad health after eating from the snake's apple.  If his team loses the game the coach loses the team.  If they win they go to the World Series.  Iris is in the stands with her 16 year old son and a secret she desperately wants to tell Hobbs.

Hobbs comes to the plate and takes a strike.  Lightning flashes through the sky.  Like God taking back his gift, Wonderboy breaks on the next swing.  Could a movie get anymore poetic.    Then comes the next pitch and the shower of sparks and one of the greatest endings of any sports movie.

Redford impressed me the entire film.  The man was 48 years old when he made this, but was thin and full of energy.  He plays himself in the early scenes as a wide eyed kid going to Chicago, and pulls it off.  Levinson helps by not filming him in close up to avoid Redford's crows feet.   In real life Redford went to college on a baseball scholarship but lost it because he got into trouble for drinking.

The Natural has some great dialogue.  In my favorite scene, besides the ending, Iris visits a sick Hobbs in the hospital.  He reminisces about his dad and how much he misses him, but then Hobbs' cut himself off and says, "Man I love baseball."   Of course he is saying so much more.  In that same scene Iris tells Hobbs that everyone has two lives, "The life we learn with and the life we live with after that."

The Natural has an wonderful message about lost dreams.  Just because we did not get to accomplish those things we once thought were so important does not mean our lives are without purpose.  The Natural is one of the best movies I have seen in a long time. 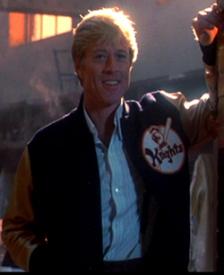 I only have one complaint about your review Eric, and that is when you say, "If the baseball field was Eden..." The baseball field is Eden. To many, the game of baseball is just that; a game. Others though, see the poetry and the purity in it and how it can stand for so much more. Anyone who has ever walked into a stadium, emerging from the darkness of the concourse into the bright, sunny expanse of green that suddenly opens up before them and felt as though they were walking, not into a sports arena, but into a cathedral, knows that baseball is more than a game. Clearly, Barry Levinson, Robert Redford, along with writers Roger Towne and Phil Dusenberry, understand this because this movie so perfectly captures the nostalgia, the magic and the love that baseball generates.

Early in the story, the woman in black asks Roy Hobbs if he's ever read Homer and she comments that if Homer were writing today that he would be writing about baseball players. She has a point as Hobbs is a hero so much larger than life, but also so very human.

Like many great Homeric heroes, Hobbs is punished for the sin of hubris. He wants to play ball so that people will say, "There goes Roy Hobbs.  The best there ever was." You could say that the entire movie is about him learning to play the game for more noble reasons than mere glory or wealth. Also like a Homeric Epic, Hobbs begins the movie by 'slaying' a giant. In this case, the Whammer, a player obviosuly based upon Babe Ruth, whom he strikes out on just three pitches.

This is very much a Hollywood movie. In fact, it feels very much like an old-fashioned Hollywood movie. It's sentimental, schmaltzy and over-the-top at times, and yet in a really, really good way. Those moments when Hobbs hits the ball and the music swells, or when Iris stands up to inspire Hobbs and the sun strikes her hat so perfectly, turning it into a halo, are larger than life, but they also suit the tone of the story, which really is like one of those stories you might hear from an old-time baseball commentator.

I agree with you Eric that Redford does a great job in the role of Hobbs. He carries the movie almost single-handedly. Although I agree that he's in good shape, he does look his age. It doesn't affect the movie at all, but you can tell he's older than he's playing.

Of the rest of the cast, Wilford Brimley as Pop Fisher provides some nice comic relief as the grumpy old coach looking for that one last win before he retires. Although the women in Hobbs life do play an important role, the actresses are just there to support Redford and don't really stand out, although Close does play her part with a purity that you wouldn't expect after seeing her in Fatal Attraction. I don't suppose if that movie had come out before this one that she would have been given this part.

Baseball has inspired many movies, but also a fairly large number of poems, of which you could almost say this movie was one. One of my favorites is "Game Called" by Grantland Rice and it was written way back in 1910.  The final stanza goes like this, and it shows, as so many books and movies have done, that baseball is often the perfect metaphor for life.

Game Called. Upon the field of life
the darkness gathers far and wide,
the dream is done, the score is spun
that stands forever in the guide.
Nor victory, nor yet defeat
is chalked against the players name.
But down the roll, the final scroll,
shows only how he played the game. 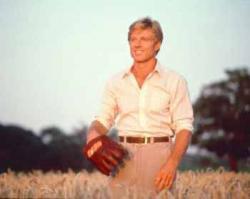 Baseball makes the best metaphor for life of any sport as well as the most dramatic movies. I think this is because, more than any other sport, it combines teamwork with individual talent. Teamwork when you take the field to play defense and individual talent when you are up at bat and it is just you and your bat against the pitcher and the ball.

The Natural is everything my brothers wrote, a sweeping, old-fashioned, sentimental epic of a movie filled with poetic symbolism. From the very first scene was there ever any doubt that it would come down to the bottom of the ninth in the final game for the pennant, two men out, two men on base and Roy Hobbs, the winning run, up at bat?

That scenario has been played out in one form or another in every baseball movie ever made. The Natural adds so much dramatic tension to it that it is easily the most satisfying conclusion to a sports movie that I have ever seen. It will make you stand up and cheer but also put a huge lump in your throat at the sheer purity of the game and the manner in which it can cause the human spirit to soar.

Robert Redford is perfect as Roy Hobbs. Redford’s age works for the character. All of Hobbs’ dashed hopes and misplaced dreams are written across his face. Scott you summed up his emotional arc beautifully and Eric you did an excellent job of writing about the women in his life. I cannot find fault with anything either of you wrote.

The Natural says so much about life. But mostly it is about courage. The courage to go for that improbable second chance at your dream, the courage to stand up for what you believe in, and the courage to physically lay your life on the line for a greater glory. Roy Hobbs and that magical summer of 1939 will linger in your memory as a hazy field of dreams long after the final credits roll.