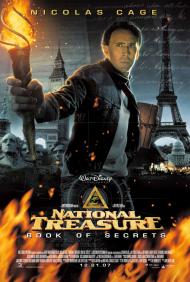 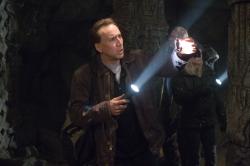 When last we met Ben and Abigail they had moved into a mansion and Riley had a new red Ferrari. Both items purchased from a unbelievably huge treasure they discovered in the first movie. As Book of Secrets starts, Ben and Abigail are having relationship problems. But what do I care? My favorite character is Riley. He can't give away a book he wrote about their adventures and other urban legends. Girls ignore him and his Ferrari gets taken away because of taxes.

The movie gets going when it is announced that an ancestor of Ben's played a part in Lincoln's assassination. This sets Ben on a quest to clear his family name. This takes him to Paris, London, Washington and Mt Rushmore for the action packed Indiana Jones esque finale. But all is not as it seems and Ben is just a pawn in a different hunt.

The fun of these movies are the mysteries and the bits of history, faux and factual, thrown in. Ben finds and solves the most obscure clues based on obscure historical references. The best joke is when Ben is reading from a book and says, "This doesn't make any sense." And Riley remarks, "As if these clues ever do."

The movie moves at a pace that is just fast enough to stop you from realizing just how none of this makes much sense. Ben gets away with anything and everything no matter if it is breaking into Buckingham Palace or kidnaping the President of the United States. This is mindless fun that makes for a good afternoon watch but will have a very short shelf life in the long run. 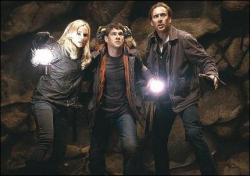 This movie is so implausible and yet just enjoyable enough to qualify as a guilty pleasure. Ben's plans are completely dependent upon factors that are beyond his control and yet they all work. He "knows" somehow that he'll be thrown into a holding cell in Buckingham Palace (with an electronic lock that can be opened by computer) instead of being arrested by the police. He "knows" that the President of the United States will accompany him into the basement of Mt. Vernon, without his security. I blame this on the laziness of the writers. They can't come up with more plausible means for the mystery to be solved than this.

Luckily, though, the plot moves fast enough that you don't really get a chance to dwell on the weaknesses of the plot. Also, the characters are all likable enough and the dialogue is breezy and light. This is the cinematic equivalent of a stick of bubblegum or a pop song. It's enjoyable at the time, but there's nothing that really sticks with you and it certainly doesn't bear watching more than once. 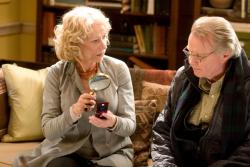 I couldn't agree more. This is a rehashed version of the first movie and it suffers from the same stale quality that permeates nearly all sequels. Yes the cast remains likable and the adventure moves along at a brisk pace, never stopping in one place too long. But it all has a been there, done that feel to it that it never manages to shake.

I'm surprised neither of my brothers mentioned the addition of Helen Mirren as Nicolas Cage's mom. She is the greatest over-60 female action star ever in movies. She has a cute scene where she and Jon Voight make like senior citizen versions of Luke Skywalker and Princess Leia when they swing by rope across a chasm. It is easily the best moment in the entire picture.

To its credit, like the first National Treasure, this Walt Disney production has an old-fashioned patriotic quality about it that is somewhat refreshing in these overly cynical, conspiracy-theory filled times. The President, for example, is portrayed as heroic and honorable. Although the President's response to Riley when he asks him about the mysterious President's Book is about as predictable as movie dialogue gets. In the second he takes for a dramatic pause I guessed his response, as I'm sure nearly everyone who ever saw this movie did. “What book?” he says enigmatically before turning away.

The climax at Mount Rushmore is so completely over-the-top that it's nearly laughable. Fortunately the filmmakers and actors keep tongues firmly in cheeks the whole time. They are smart enough to let the audience know they are in on the fact of just how implausible it all is. National Treasure: Book of Secrets is a cinematic guilty pleasure suitable for a rainy afternoon watch. 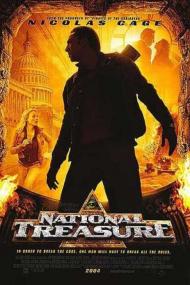