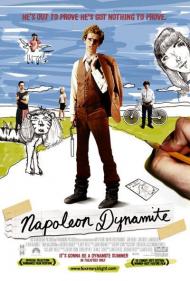 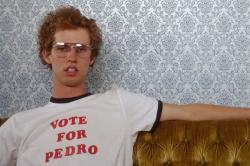 First time director Jared Hess delivers this sweet and charmingly off-kilter high school comedy set in rural Preston, Idaho, his real-life hometown. The winning cast and quirky script combine for a good time at the movies and Napoleon Dynamite is the most original movie teen since Spicoli in Fast Times at Ridgemont High.

Napoleon is a nerd with a capitol N. He has frizzy red hair, wears glasses, goofy t-shirts, hammer-pants and moon-boots. He likes to draw pictures of his favorite animal, ligers (a cross between a lion and a tiger), and enjoys solitary games of tether ball. He lives with his dune-buggy-riding grandma and 32 year old, just as nerdy, slacker brother. When grandma is hospitalized after a dune wipe-out Uncle Rico comes to stay with the brothers while she recovers. He is stuck in his glory days, trying to recapture 1982 when he almost led his football team to the state championship.

The town of Preston creates the perfect setting. Although set in the present the town seems to be at least twenty-five years behind the rest of the world. Anyone who went to school during the nineteen-seventies or eighties should get waves of nostalgia at the look of Preston High. The open fields and distant panoramic mountains add to the sense of isolation. This is a world apart. And though at times Hess seems to be making fun of these small town people, it is never mean-spirited. For the most part he is laughing with them and not at them.

Everyone remembers that unpopular nerdy kid in school who seemed to live in his own world. The one you probably never spoke to or wondered much about. Napoleon Dynamite takes you inside the world of one such student and celebrates his geekiness. Warning: this is an unabashed feel-good flick but the cast is so vividly wrought and the humor so infectious that I wouldn't be surprised if this little movie becomes a breakout summer hit. I hope so anyway. 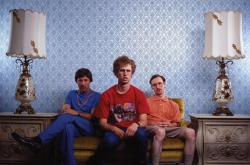 This movie is rare in that its hero is a geek. It is rare for good reason. I got annoyed with Napolean's closed eyes expression and repetitive use of the word "idiot" within ten minutes of viewing. Even though I was more of a geek than jock in highschool, I wanted to kick this guy's ass just because he is so damn annoying.

Nothing really happens plot wise. Everyone in it is either stupid and or retarded. However, the dialogue will stay with you long after hearing it. "Whatever I feel like I wanna do. Gosh!", "You know, there's like a butt-load of gangs at this school. This one gang kept wanting me to join because I'm pretty good with a bow staff.", and my personal favorite, "I see you're drinking 1%. Is that 'cause you think you're fat? 'Cause you're not. You could be drinking whole if you wanted to."

My opinion of this movie is much closer to Eric's than Patrick's. The character of Napoleon is easily one of the most irritating ones ever filmed and the fact that he is supposed to be the hero of the film is bewildering. Eric's point that every one in this movie seems retarded is an accurate one.

As I watched the movie, resisting the urge to scan ahead, I found that the movie does have a rhythm of its own that draws you into its world. There is no plot, as Eric mentions; rather there is just a series of events. Taken together though, they create a mood that helps the story coalesce.

Patrick's right that everyone remembers that nerdy kid in school. I was one of those kids and so were most of my friends, but this movie is not an accurate depiction of them and no movie that I've ever seen has ever done them justice. Like most movies, this one gets it wrong by implying that the nerdy kids want what the popular kids have; to date and have the entire school look up to them. Most so-called nerds are just those kids who spend more time in their own minds than in the real world. If you took a poll amongst them, most would probably tell you that rather than wishing they were one of the popular kids, they actually feel superior to them.

With no likable characters and very weak humor, Napoleon Dynamite might be a cult hit, but it's not a movie I ever care to see again.