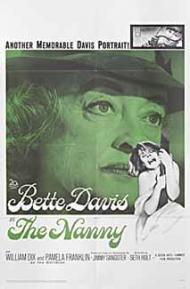 Wiiliam Dix and Bette Davis in The Nanny.

The Nanny was made by Hammer Films and shot in London in 1965. 57-year-old Bette Davis played the titular character (the role had originally been offered to Greer Garson but she didn't think it suited her image (she was right)). Bette Davis had recently resurfaced as a horror movie queen following the successes of What Ever Happened to Baby Jane?, Dead Ringer and Hush...Hush, Sweet Charlotte. Like those films, The Nanny is a psychological thriller. Seth Holt directs with a steady eye. It was filmed in black and white but the fluid camera movements remain fairly modern looking today.

The Nanny centers on a battle of wills between 10-year-old Joey Fane and the family Nanny. As the story begins Joey is returning home after a two year stay at a school for disturbed children. As a parting joke to the staff he pretends to have hanged himself in his room. Once he returns home he immediately begins acting hostile towards Nanny. He insists on moving to another bedroom that has a fire escape and refuses to eat anything Nanny prepares for him. He also makes her promise -in front of his mother- not to enter the bathroom when he's taking his bath.

Joey confides in the teenage girl who lives upstairs (Pamela Franklin) after they meet on the fire escape (she smokes). He tells her that Nanny killed his baby sister and that he was blamed for it. We see it happen in a flashback. Nanny, meanwhile, infantilizes Joey's mother, who's on the verge of a nervous collapse. Joey's father is the very picture of the stiff upper lip Brit. The other main character is the aunt with a bad ticker who was also raised by Nanny. As the movie unfolds we see a slightly different version of the events of the day Joey's sister died when Nanny finally reveals her long held secret.

The excitement level remains fairly low key. There is an underlying level of tension and suspense running throughout the film, but it lacks any real jump-out-of-your-seat type moments. The Nanny is more of a character study than a horror film. The best things it has going for it are the two central performances.

Young William Dix is quite good as the seriously troubled Joey. You're never quite sure whether or not he's telling the truth and that's thanks mostly to the lad's acting ability. Unfortunately his career never took off. He would have just one other major role in a movie when he appeared in Doctor Doolittle in 1967.

Bette Davis gives one of her more understated performances. She has a few over-the-top moments near the end but for the most part she is content downplaying her famous mannerisms. She attempts a slight English accent that, while not pitch perfect, certainly doesn't get in the way. The script combined with her carefully orchestrated facial expressions keep you guessing right up to the climactic scene.

Hammer Films had an impressive run from the late 1950s to the late 1960s. They are best known for rebooting iconic horror monsters like Dracula and the Wolf Man. The Nanny is one of their better non-supernatural films of the period, that also provided the legendary Miss Davis with yet another memorable role.