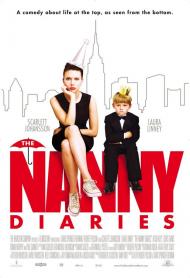 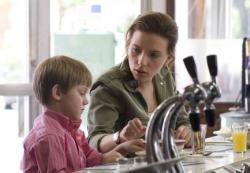 Nicholas Art and Scarlett Johansson in The Nanny Diaries.

On our coming attraction page The Nanny Diaries was described as, "A 21-year-old New York University student becomes a nanny to a family on the Upper East Side who turns out to be the family from hell. The story of the journey of Annie Braddock, a young woman from a working-class neighborhood in New Jersey, struggling to understand her place in the world." That may be a vague description of the plot but it is hardly what the film is saying.

This movie is simply about making fun of rich people by making them out to be self centered, stupid and cruel. Annie becomes a nanny to a rich New York couple that have no time for their child. Not because mom is busy, but because she just does not want to take the time to care for her child. She is completely self absorbed. "Nanny, you never mentioned you had a mother!" She dimly says at one point. The movie makes out all rich women who have nannies to be like this.

The rich dads do not get off easy either. Annie angrily describes them like this, "They're chubby, bald, steak-eating, cigar-smoking, type-A pigs who get more turned on by the Bloomberg Wire than they do by any hot nannies." Maybe it's just me, but I thought those were mostly good qualities?

Karl Marx said that, "Religion is the opium of the masses." I think movies are the opium for the masses. The masses (the have nots) get to watch movies, like this one, where the haves always look bad and amoral. Annie's working class family and friends are all nice people who try to steer her out of her abusive situation created by her domineering boss.

Am I the only movie going person sick and tired or rich people always being treated like idiots in movies? This stereotype has become obnoxious. The jokes in this movie fall flat due to the fact that making fun of rich people is too ancient of a punchline.

I went on about the stereotyping in this movie because that is all there is to talk about. None of the characters ring true and as such I cared for none of them. If Annie hates her job so much then why does she not just quit? The closest thing to a likable character is the Harvard guy Annie likes. He does not have any amazing characteristics, he is just the least annoying person in the film. 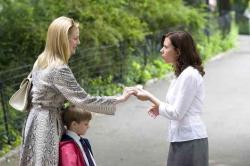 Laura Linney and Scarlett Johansson in The Nanny Diaries.

The hoary old cliche of casting the rich as villains goes far back before the movies ever started, but certainly Hollywood has never been afraid of exploiting the stereotype.  Although I don't understand why that particular plot point bothers you so much Eric.  A typical Hollywood movie is filled with all manner of cliches.  Given all that's wrong with this movie, that really seems like the least of its problems.  And if you've seen any episodes of The Real Housewives of...., you'll know that the women depicted in this movie do exist in real life to a certain degree.

I've never read the book this movie was based on, but given its popularity I can only guess that it was better written than this script.  The biggest single problem with it is that it never gives a strong enough reason for Annie to stay at her job.  The X's are so uncaring and so thoughtless that it becomes impossible to see why she just doesn't quit.  You're supposed to understand that she stays for Grayer's sake, but the script never shows you why she cares for him beyond the fact that he's kind of a cute little kid.  If they'd written that she was desperately in need of money (for student loans or something) and that she couldn't find any other job, then maybe you could understand why she stays, but nothing like that is ever stated.  There doesn't seem to be any reason why she couldn't just continue living at her mother's while she looks for work.

The ending of the movie is as unrealistic as the rest of it.  Mrs. X's behavior in the final scene is completely unbelievable and belies everything that came before it.  Only occasionally does the movie allow Mrs. X to appear human, but that has more to do with Laura Linney's acting abilities than it does the script or direction.  Most of the time she's shown to be shallow and vain and completely two-dimensional.  They needed to either make her more human or gone for an all out comedy and just made her even more of a stereotype and a caricature.  Paul Giamatti's part could have been played by anyone and hiring a name actor was simply a waste of money.

Generally I try to find at least one good thing in a movie, but I'm really reaching to try and find it in this one.  I guess the best I can say is that Scarlett Johansson looks good and so does New York City.  Other than that though, I am really stumped to find anything.

Your obession with the fact that the X's are rich and obnoxious Eric, definitely clouds your review, but you are right, this is a really bad movie. 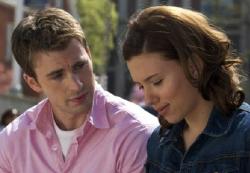 Chris Evans and Scarlett Johansson in The Nanny Diaries.

This movie certainly has its flaws but it’s not as bad as you both paint it. The character of Annie is likable enough as played by Scarlett Johansson. It is first and foremost a comedy and it has many humorous moments. I enjoyed the theme of it being an anthropology expedition into the lives of Manhattan’s wealthy Upper East Siders.

Of course it stereotypes the rich but since it was based on the real life experiences of an actual nanny I have no problem seeing much of it as truthful. In my opinion if you are married to a man as rich as Mr. X, you don’t work for a living and you have only one small child, you don’t need a nanny. Get a maid, housekeeper, cook, chauffeur, what have you, but take care of your own damn child.

That said I agree completely that the change that comes over Mrs. X at the end is patently ridiculous. It suggests that all she needed was to have her eyes opened up to her selfish ways and to dump her philandering husband to become a nice person. Whatever! Before her miraculous change of heart she is so over-the-top in her self obsession. At one point calling Annie on her night off to say (without a trace of irony), “I know that I agreed to let you visit your grandmother in the hospital tonight, but I need to remind you that tomorrow is Grayer’s birthday.”

I disagree with Scott about his statement that the movie doesn’t fully explain why Annie stays at the job though. There are several scenes of her bonding with Grayer. She takes him on his first subway ride, buys him an Italian ice and shows him a different side of New York City life. Then comes the big moment when he first tells Annie he loves her. She mentions that it is breaking the cardinal rule of being a nanny to tell the child you love them too, but she does it against her better judgment. Even though she states explicitly that it will make leaving the job a thousand times harder.

The character of the Harvard Hottie seems to be included just so the filmmakers can say, “See we didn’t stereotype ALL rich people as selfish assholes”. He is so perfect in a completely bland romantic comedy way that he is perhaps the least realistic person in the movie.

The Nanny Diaries works best as a comedy. There are some truly funny moments, especially in the scenes of the rich housewives having their self-help seminars. I also agree that Laura Linney is a masterful actress. She is so good in fact that she almost pulls off the miraculous transformation of Mrs. X. Almost.