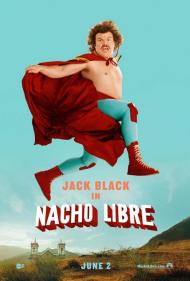 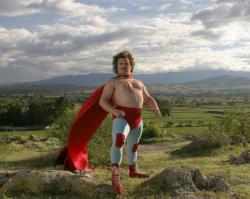 Nacho Libre is a very silly and very stupid movie, but damn it, it put a smile on my face and that has to count for something. The jokes are clearly aimed at 12 year-old boys and farts are used as punchlines about five times more than necessary, and most of the jokes are contingent upon you finding Jack Black's thick Mexican accent amusing, but somehow it is still endearing and leaves you feeling good.

Black stars as Nacho, a monk in a Mexican monastery where his main duties are preparing the daily gruel for the orphans. Secretly though, he dreams of finding fame and fortune inside the wrestling ring. He doodles costumes of his character in church and daydreams of it constantly. When one day the orphan's day-old nacho chips are stolen by a stringy, but tough homeless man, Nacho senses a kindred spirit and makes the homeless man an offer to join him in a tag-team wrestling partnership. To keep the other monks from discovering what he is up to, Nacho dons a mask when in the ring.

Although they never win any matches, the crowds like them and so they keep getting invited back and keep earning money. Enough money that Black can afford to buy the orphans some good food and some flashy clothes for himself that he hopes will impress the new nun who has just arrived to teach the orphans.

Despite the sometimes distasteful humor, the movie is very family-friendly and even ends with an uplifting moral.

The reason this movie works despite everything it has going against it, is Jack Black. The guy has some kind of star quality and a lot of charisma, especially for a short, pudgy guy who spends most of the movie with his gut exposed. He's like a cuddlier version of John Belushi and he share's Belushi affinity for physical stunts that often seem to bely his build.

This certainly isn't a movie for everybody. If you can't let your hair down at the movies and laugh at some very lowbrow humor you'll be bored stiff here. Hell, if I'd gone in to this movie on a different day and in a different mood, this review might have been completely negative. However, it just hit me right when I was in the mood for some completely silly humor and this movie has that in spades.

Not all the jokes work of course and those that do are almost always repeated, but enough of them do to make it worth the admission.

If you can dig down and find that little boy inside you, you'll have a good time with this movie. If you can't, then you'll be left shaking your head at the stupidity of it all. 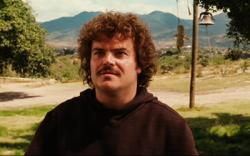 From the director and writer of Napoleon Dynamite comes this south of the border comedy starring Black, who also acted as producer. Many similarities can be drawn between the two films but the big difference is that everyone could relate to feeling unpopular at some point in their life like Napoleon Dynamite, but who can relate to a monk who wants to be a wrestler and score with a nun?

As in Napoleon Dynamite, Nacho befriends a Mexican outcast, Esqueleto, and they become best friends. Together, they train and tag team wrestle. The skinny Esqueleto gets most of the laughs as he screams like a girl whenever he's threatened. One of the funniest scenes comes when he is trying to escape the amorous clutches of an overweight girl at a party. For some reason she has tunnels all over her house and she tries to drag him into one.

Nacho Libre is fairly predictable. The relationship between Nacho and the nun stays, thankfully, platonic. Black throws himself into the role and the wrestling matches are the highlight of the movie. My 12 year old liked the scene where Nacho gets caught by one of the orphans wearing his costume. An embarrassed Nacho explains that when the kid grows up he will understand that sometimes a man likes to wear stretchy pants in his bedroom.

Although not as original and funny as Napoleon Dynamite, Nacho Libre is worth a few laughs, especially if you have some young kids with you. 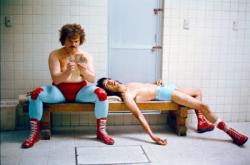 I too enjoyed this heartwarming lowbrow comedy. Jack Black has talent and charm in spades. Although to be honest some of his shtick misses the mark and his accent comes and goes; at times almost sounding French. But he is capable of sublime moments of comedy. The flirty look he gives the nun while drizzling dressing on her salad cracked me up. This movie is filled with funny little details like that.

The story is sweetly simple and the action never goes over the top. The setting is colorful and rather unique in a modern comedy. Who but Jared Hess would think to combine the worlds of a Catholic Mission with professional wrestling?

Like Eric, I laughed hardest when the amorous overweight girl tries seducing Esqueleto. When she begins scampering towards that huge mouse hole in the wall, knocking aside a chair on her way, it is one of the strangest yet funniest sights you will ever see.

Nacho Libre is definitely family friendly. It has plenty of bodily function jokes aimed at the kiddies and, as Eric pointed out, the relationship between Nacho and Sister Encarnación thankfully never crosses the line of propriety. Like Scott I found the ending touching. The friendship between Nacho and the fat little boy Chancho may surprise you with its poignancy.

I would perhaps have thought Black’s performance was insulting to Mexicans if not for the fact that all the Mexican guys I work with love this movie. One of them looks quite a bit like Nacho. He has the same large gut. A French guy I used to work with also raved about this movie. Apparently it is funnier if English isn’t your first language.