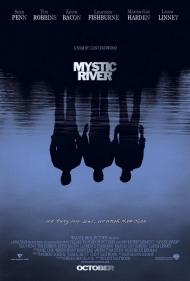 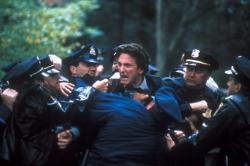 Mystic River is a movie filled with great acting. Sean Penn, Tim Robbins, and Marcia Gay Harden all give award worthy performances. They are far better than the movie as a whole, which starts strong, but changes halfway through from a human drama into a mystery, and it's a mystery with an obvious ending. That is to say that while some of the actor's in Mystic River deserve Oscars, it is definitely not the Best Picture of 2003.

The movie centers on three childhood friends, Jimmy (Penn), Sean (Bacon), and Dave (Robbins), now grown and somewhat drifted apart from each other, but still tied by the bond of one day from their childhood, when Dave was kidnapped and raped. The three men are reunited when Jimmy's 19-year-old daughter is murdered. Sean is now a Police Detective, who, along with his partner played by Laurence Fishburne, is assigned to investigate the murder. Dave, one of the last people to see Jimmy's daughter alive, returns home the same night as the murder with blood on his shirt and a sketchy story about being mugged. At the center of the movie is Jimmy, played powerfully by Penn. Jimmy was once a mobster, but turned straight when, following the death of his first wife, he was forced to raise his daughter on his own.

Through the first half of the movie, the story is an emotional one of people coming to terms with the sudden and violent murder of a loved one. The performances are so real and compelling that you are pulled forcibly into the story. Watching Penn hold it together and then come apart is an example of some of the finest acting of the year, and Robbins, with a much more subdued and underplayed performance, is equally riveting. Against these two powerhouse actors, Bacon never stands a chance. His Detective is pretty standard and he's never given the opportunities that his fellow actors are to show his stuff. His are the only scenes that could have been trimmed, as we don't really need the back-story between him and his estranged wife.

About halfway through the movie, it changes gears. Jimmy, using his former gangster connections, tries to track down his daughter's murderer, vowing to kill whoever did it. Sean's investigation continues as well, with suspicion falling upon Dave, whose behavior becomes increasingly erratic.

The climax of the movie is reminiscent of The Godfather, but unfortunately is a little obvious. I was able to see who had done it and where the movie was headed a long time before the end came. That's not so important here, however. It isn't the mystery that matters, but the effects this one murder has had upon a group of people, and the consequences of how they handle it.

Mystic River is worth seeing for the acting alone. If not one of the performances takes home an Oscar, I will be stunned. It's just a pity that the story didn't equal the acting. 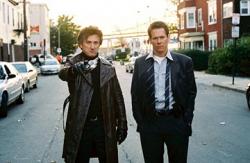 Scott, either you've seen too many movies or I'm just a bit slow on the uptake. I was surprised at the killers' identity. As murder/mystery twist-endings go this one is pretty good.

Eastwood seems to be in a rather dark place as a director these days. Both Mystic River and Million Dollar Baby, while both great movies, are hardly uplifting. River at least attempts redemption in the end in a way that Baby never does.

It was great to see legendary character actor Eli Wallach (The Misfits) still acting after all these years. He has one quick scene as the owner of a liquor store.

As Scott wrote the acting is very good. Penn and Robbins deserved the Oscars they took home. Their scene together on the porch will one day be a classic. Penn, fighting back tears, says, "And it's really starting to piss me off, Dave! She's my own little daughter and I can't even cry for her!" Robbins answers back, "Jimmy, you're crying now." It's a great moment.

In fact the screenplay has some pretty good lines. I was touched at the end when Sean asks Jimmy when the last time he saw Dave Boyle was. His answer, "That was 25 years ago, going up this street, in the back of that car." 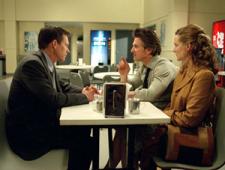 I, as well, did not guess the killer. The murder mystery is what the plot hinges on, but it is the performances that carry this absorbing tale.

I have often been put off by Penn's and Robbins's politics but, I have to give it to them, they can both act when playing the right role. Penn plays the hard case better than anyone out there. His Jimmy is a cold blooded killer with a heart of gold, at least when it comes to his family. Robbins plays a man who, like his half written name in the cement, is not whole. He always seems uncomfortable around everyone except with his son whom he relates very well to. It is like the line Patrick mentioned. Dave, even as a grown up, is still just that 11 year old boy.

I have come to appreciate Laura Linney as a great actress lately. She has done some great work in some great movies. I watched this film thinking how wasted she was in it, until the very last couple of scenes. There, Linney's dutiful wife reveals who she really is, and no she is not the killer. She is worse.

Another performance that stood out for me was that of Tom Guiry. My youngest son loved the movie, Lassie (1994). I had to watch the video dozens of times. Guiry played Lassie's annoying child companion. I never thought he would amount to anything, acting wise, and was suprised to discover that he does some really good work in a very pivotal role. He really may, and should, have a long acting career after all.