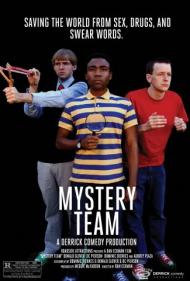 Mystery Team is often juvenile and sometimes desperate for a joke, but I laughed as much watching it as I have at anything else I have seen recently.  If you can get into the premise, you may as well.

Jason, Duncan and Charlie are three best friends in the spring of their senior year of high school.  Since childhood, they have had a neighborhood detective agency for children who have lost something or been wronged by a bully.  The three friends are 18 years old but all act as if they are still 10.  They never swear.  Their favorite drink is chocolate milk and none of them has the vaguest clue what sex is.

Jason is the leader.  He has a stand in his front lawn that resembles Lucy Van Pelt's psychiatric stand.  When he gets the word that something dastardly has happened, like a pie gets pinched, he walkie talkies Charlie and Duncan and the three bike to the rescue. Jason's skill is that he thinks he is a master of disguise.

Duncan is supposedly the brains of the outfit.  He looks and sounds a bit like Napoleon Dynamite. He likes to memorize useless facts, thinking that makes him smart.  "Sorry I'm late, everybody. My science teacher says my thesis needs to prove something... but I think listing all the dinosaurs proves there was a lot of dinosaurs."

Charlie plays the part of the muscles of the group, even though he has scrawny arms.  He is also the dimmest bulb of the three.  He creates the most sympathy.  He is shown trying to work out alone and at another point he tries to unsuccessfully ingratiate himself into the jock crowd.  He is always one step behind the other two.

One day a little girl approaches the mystery team to hire them to find out who killed her parents.  The three junior detectives take on the challenge and stumble their way through a mystery, and a world, that is beyond their comprehension.  This leads them to hysterical situations that puts them into a world that is not nearly as sanitized as the one they have been living in.

The funniest sequence is when these innocent guys follow a suspect into a gentlemen's club, not realizing it is a strip club.  He is wearing a ring previously owned by the murder victim.  Once inside they are greeted by a topless woman who tells them that, "My pussy is so wet for you."  After getting lap dances they walk off with erections.  Charlie bumps into Duncan and states as if answering a trivia question, "That was my penis."  The ring takes an interesting, yet vulgar journey that leads to a toilet full of excrement.  The mixing of adult and childish humor is not as odd as you may think.

These guys have a certain charm with their childlike perception of the world.  Their naive reaction to adult situations are the funniest moments in the film.  These guys first come across as idiots but then we see that it is just a refusal to move beyond a moment in their life where they were so very happy.  The Mystery Team has a moment where Duncan reveals that he is actually self aware of that fact.  He shockingly swears in front of Charlie and Jason. "Fuck! Yeah, that's right. I've been saying "fuck". Going in the backyard and trying it out."

Mystery Team was written and produced by the cast and the director.  The theme being that we all must grow up, no matter how scary it may seem.  This is punctuated by the Mystery Team's best informant,  middle aged grocery clerk Jordy, "When I was fifteen years old, when I got this job, I said to myself, "I am going to work here until the day that I kill myself."

Made on the cheap and not always as funny as it could have been, Mystery Team remains a unique film, putting "G" rated characters in "R" rated situations.  The combination is often hysterical. 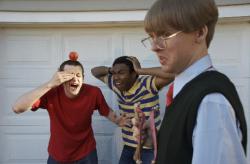 Five minutes into this movie and I was ready to pronounce it one of the stupidest things that I'd ever seen, but gradually it warmed on me. By thirty minutes in, as the Mystery Team starts to show that deep down they're actually aware of how odd they are, I was laughing. By sixty minutes I was ready for it to be over. Essentially the plot is a Saturday Night Live sketch stretched very, very thin. There's just not enough there for an hour and forty minute feature.

Like you Eric, I felt the movie peaked at the strip club. It's certainly the height of the shock humor. Once you've had Jason walk in on a naked man having a woman squirt breast milk onto his ass and Duncan fishing around in a toilet filled with shit ("There's something sharp inside something soft in here!") you've peaked on the shock-o-meter. There's nowhere else to go but up.

The cast is all likable enough. Donald Glover has written for 30 Rock (a couple of its cast members show up in cameos here) and  he's now a regular on Community. Bobby Moynihan of SNL is a scene stealer as their bitter eccentric friend at the grocery store. His line about killing himself that you quoted Eric was one that stood out to me as well.

Castmembers Glover, Pierson and Dierkes started their careers making online comic shorts as the Derrick Comedy group. You can see the sketch/short structure that they're used to in this movie. It has a very episodic feel to it as bit follows bit. Watching these guys in small doses would have been easier to take.

There's some talent here and I'm sure at least Glover will have a career. And there are some very funny parts to this movie. I wouldn't say that it's ever hysterical, but it's funny enough in spots. There's just not enough for a full length movie.

So we're not just removing clothes?

Yeah it definitely takes a few minutes to get adjusted to the style of humor in Mystery Team. It feels like a home movie starring a cast of amateurs. The quirky humor does contain some genuine laughs though and the story moves along quickly once the set-up is established. I found the three main characters to be sweet in their concerted effort to stave off adulthood. They have intentionally kept themselves innocent and childlike and now, on the verge of graduating from high school, must face their futures.

The laughs come mostly from the innocence of Jason, Duncan and Charlie and their childish reactions to the world around them. Even the little boy neighbor makes fun of them. When Charlie catches him on the playground and proudly announces, “I caught you.” The little boy replies, “Of course you caught me motherfucker - you’re 18.”

Some gags work and others don’t however. Jason’s disguises are one example. They are pretty stupid. The one that does work is when he dons a traditional Mexican outfit to sneak into an office building only to discover a costume party in full swing. He gets some advice from an older guy dressed like a cowboy.

As mentioned above the strip club antics are the most shocking parts of the movie. It includes some gross-out bathroom humor which has become de rigueur in today’s comedies. There are also a few requisite projectile vomiting scenes. But even at its most silly and disgusting Mystery Team never loses its wholesome sweetness.

I was charmed by these three boys on the verge of becoming men and not wanting to face the adult world. I could relate to them. Donald Glover as group leader Jason has the biggest arc as he is the most in denial about the real world. He is shocked to learn that Charlie and Duncan have already been accepted to college while he has made no plans for life post graduation. The scene at the convenience store with the line my brothers both mentioned is the moment where Jason finally realizes he has to grow up or else wind up like Jordy.

Aubrey Plaza (currently appearing on the sitcom Parks and Recreation) plays Kelly, the girl Jason likes whose parents were murdered. By the end of the movie Jason has finally left his childhood behind. He’s become an adolescent well on his way to adulthood. He now drives a car instead of riding his bike, has a real job and a girlfriend.

As Eric wrote Mystery Team places “G” rated characters in “R” rated situations. It doesn’t always work but the three main characters are sweetly original and very likable and they drew me in.