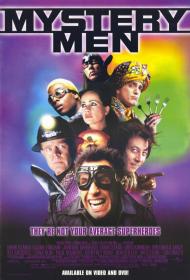 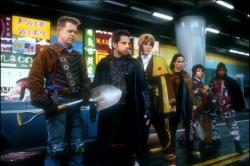 A movie about superheroes that have no superpowers. One of them has flatulence he can direct at a particular target and another has a bowling ball with a mind of its own, well a skull of its own anyway. Now with a premise like that you would think this movie would be hilarious. It is funny but its not hilarious.

The film tries very hard to wring every laugh out of it. The great cast lead by Hank Azaria, Ben Stiller, Janeane Garofalo and William H. Macy (who has the best lines) try hard but can't elevate this movie to the great film it almost is.

The problem I believe is that the "real" superhero in the movie Captain Amazing, played by Greg Kinnear and the villain Frankenstein Casanova, played by Geoffrey Rush are just as inept as the inept superheroes. So the entire film just has an absurd feel to it. For bigger laughs Captain Amazing should have been played straight and serious while Frankenstein Casanova should have been a real threat as a villain and not just a sharp pinky nail wielding idiot.

This is a good movie, but it could have been played for more laughs. 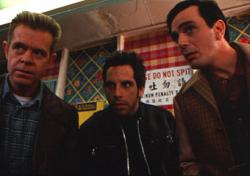 As a comedy, I agree with Eric, that Mystery Men almost achieves greatness. The futuristic setting, the characters and the jokes are all there. The failure of this flick is in the pacing, which is the most surefire way to deflate a funny film. The jokes are clever but do not come fast enough and many scenes take way too long to set up.

Two members of the cast, which Eric overlooked but deserve mentioning, are Kel Mitchell as invisible boy (he can only turn invisible when no one is looking) and Louise Lasser in a small part as The Blue Raja's mother. As stated above, the rest of the cast is quite good.

While Mystery Men entertained me, it also disappointed. A few more belly laughs and a slightly tighter edit job would have elevated this to a classic. Instead of just an amusing, little superhero parody. 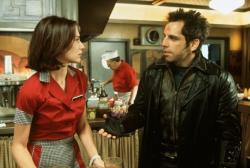 I think all three of us agree that this movie could have been better. It's only the reasons why, that seem a bit different. Eric thinks it was in the characterizations of Evil and Amazing, while Patrick sees it as a badly edited comedy, lacking in real laughs.

Personally, I think the problem with this movie, is that it can't really decide what type of movie it is supposed to be. Sometimes it's a straight out comedy, other times, it's a parody of Super Hero comic books, still other times, it tries to be a movie with heart. It achieves each of these things in a small way, but it should have just stayed with one of these themes and gone all the way with it.

The best thing this movie has going for it, I think we all agreed on, is the cast. Hank, Ben, and Janeane are three of the best comic actors working today. In addition, one member of the cast, that neither Eric nor Patrick mentioned, is Eddie Izzard, the funniest man to come out of England since Monty Python crossed the Atlantic. Although he is vastly under used in the role of Tony P, one of Casanova's henchmen.

Take the same cast, with a different script, add a better director, and you would have an incredible film.