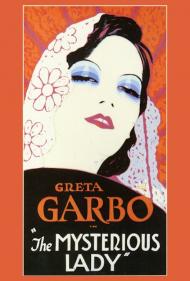 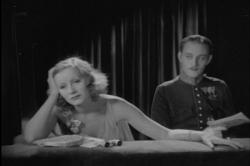 Great Garbo in The Mysterious Lady.

Greta Garbo would have turned one hundred years old September 18th, 2005. To honor the occasion Turner Classic Movies has released newly restored DVD collections of her most famous movies. The Mysterious Lady is included in The Garbo Silents: collection, which also includes The Temptress and her most famous silent movie Flesh and the Devil.

Mysterious Lady is standard Garbo fare. She plays a Russian spy in pre-World War Europe caught between her loyalty for her country and her love for a dashing Austrian officer (Conrad Nagel). The plot may be run-of-the-mill but there was something so physically striking about Garbo's beauty that she makes any movie worth watching. The camera first discovers her in a box at the opera languidly and dramatically draped over the railing. She literally lights up the screen.

She excelled at playing women that were world-weary victims of abusive men, searching and sacrificing for that one pure and unbridled love. This movie is no exception. It is clear from the start that this mysterious lady will do the noble thing in the end.

Mary Pickford and Theda Bara were the first female movie icons. Lillian Gish was the screen's first great actress. Gloria Swanson was the first “real" Movie Star and Clara Bow was the quintessential flapper. Garbo was simply the greatest of them all. Norma Desmond's line “We had faces then" applies to her more than to anyone else.

For those unfamiliar with her work, or anyone curious about the allure of silent movies for that matter, The Mysterious Lady is as good a place as any to start. 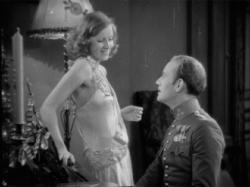 Greta Garbo and Conrad Nagel in The Mysterious Lady

As I have seen more Greta Garbo films, I have begun to understand her appeal. I truly enjoy her more in silent movies than talking films. As Patrick noted, she is all about that face and her accent distracts from it. Her looks were striking and the camera certainly loved her. Look close though, she was not in great shape. Her figure was a tad dumpy but she wore clothes that were intended to hide her flaws. A couple of her dresses reveal a hint of nipples, so you tend to keep your eyes above her less than toned stomach.

Garbo was the original drama queen. The scene Patrick mentioned and has the picture in his review is classic. It at once announces that she is a star and has complete control of the film, no matter that the other actors or director may think otherwise. Conrad Nagel as Karl, barely registers on screen. All you take away from him is that he is a love struck schmuck with romantic feelings for someone who betrays him.

Although Garbo had charisma enough to carry an entire film by herself, The Mysterious Lady has a few problems. Karl’s Uncle Eric, who works for the secret service, informs Karl that the woman he has fallen in love with, Tania, is a Russian spy. Of course Karl reacts with shock but what is truly shocking is that his uncle then decides to have Karl carry some top secret documents back to Berlin with him. So this genius knows that his nephew has been compromised by a spy who is currently on the lamb, yet he still thinks he is a good choice to carry secret information?

Wouldn’t you just know it, Tania is also on Karl’s train and the next morning the documents come up missing. Did everyone, besides Karl and Eric, see that coming? Karl gets into trouble for losing the papers, is stripped of his rank and thrown into prison. His uncle gives him a chance to redeem himself by making him a spy and sending him after Tania.

There is a bit of tension after they are reunited in Russia with Karl incognito as a piano player. Both still have feelings for the other but can either of them trust the other? As Karl is now behind enemy lines, the only one he can rely on is Tania but that was a mistake he made in the past. Can they salvage their love and get out of Russia alive?

The Mysterious Lady could have used some action scenes of Karl kicking some Russian ass. There was plenty of opportunity for it. Remember though, this was a Garbo film and the camera knew better than to wander too far from her for too long.

As a last note, I was genuinely shocked by a joke made early in the film. A fellow officer tells Karl about a time he was caught with a woman by her husband. Karl asked what the husband did and the other guy responds, “Closed the shades.” 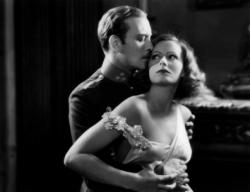 Conrad Nagel and Greta Garbo in The Mysterious Lady.

I'm not sure what Eric means by dumpy, because Garbo looks beautiful and in very nice shape throughout the film. As both my brothers said, this is her film and she carries it effortlessly. As Eric noted, Nagel barely registers. It's a tribute to Garbo's performance that we believe this vivacious female spy is actually in love with his rather dull character.

It's easy to see that this was made near the end of the silent film era. The acting is quite natural and the plot and situations quite sophisticated. It would be easy to slip dialogue into the story.

One thing that immediately struck me about the plot is how much in common it has with Ian Fleming's From Russia with Love. In that novel James Bond enters a relationship with a female Russian spy also named Tania, who is described as looking like a young Greta Garbo. And both stories, although only briefly in this film, feature scenes on a train where the protagonist confronts Tania about her being a spy. I could find nothing online that mentioned Fleming and this film, but it seems quite obvious that he'd seen it and had it in mind when he wrote that book in 1956.

Of course the biggest difference between From Russia with Love and this film is that Bond was a competent secret agent while Karl von Raden is incompetent. Eric mentioned how Karl's uncle gives him important papers to carry to Berlin even though he knows that his nephew has been compromised. This is such a silly plot point that when he did this (before I had read Eric's review), I immediately assumed that they were fake papers and the uncle was simply using Karl as a decoy. Later, this genius uncle sends Karl behind enemy lines to retrieve the papers, assuming I guess, that they hadn't been copied or read and remembered by anyone yet. Karl turns out to be just as bad an actor as he is a judge of women. Once he infiltrates the enemy headquarters, posing as a pianist, he then can't stop his every emotion from crossing his face so that anyone with eyes would be able to read him like a book. By the film's end I was starting to think the uncle was only acting like he loved his nephew and was secretly trying to get him disgraced or killed. Fortunately for Karl, the one thing he does have in common with James Bond is a magic penis. Like Bond, apparently once he sleeps with a woman, she will do anything for him as Garbo's Tania is there to save the day and do the job that Karl was sent to do.

With such a flawed script and a rather dull hero, it's only Garbo that makes this movie worth watching at all. Her charisma and star quality is eternal and it radiates as strongly on screen today as it did all those decades ago.