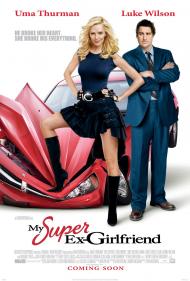 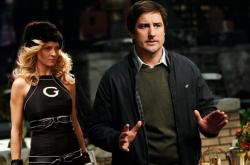 Uma Thurman and Luke Wilson in My super Ex-Girlfriend.

My Super Ex-Girlfriend is an amusing movie that lacks any real edge and takes no chances, playing it safe throughout. Consequently, while I enjoyed the movie while watching, it falls far short of being a classic.

Luke Wilson plays every-boring-man, Matt Saunders. He meets Jenny (Thurman) while riding the subway in New York (which is perhaps the most unbelievable aspect of the story, since the last thing I would ever call the subway is a pickup spot). Jenny is a mousy looking brunette who works as an assistant curator at an art gallery. And while at first she seems a little neurotic, it isn't until Jenny and Matt have sex for the first time that he begins to suspect she's more than just a little bit high-strung. Eventually Matt learns that Jenny is in fact G-Girl, the cities' resident superhero. At first this is exciting for Matt, but he quickly learns that a better name for Jenny's alter-ego would be PMS-Woman. Matters are complicated by the fact that Matt is really in love with his co-worker, Hannah (Faris) and that G-Girl is being pursued by her arch-nemesis Professor Bedlam (Izzard).

Overall the cast is quite likable and talented, although the biggest mystery might be why bland Luke Wilson would be the center of a romantic tug-of-war between the vivacious Uma Thurman and the cute and perky Anna Faris. Thurman does a particularly good job playing both the nightmare girlfriend and the heroic G-Girl, being believable in both parts. Faris, who has yet to truly break out in a movie of her own, is as cute and bubbly as always. I think it's time she moved up to starring in her own romantic comedy. British comedian Eddie Izzard gets a few laughs as Bedlam, but as has been the case in all of his films so far, his real talent, as shown in his stand-up shows, has yet to be tapped on film.

The pacing of the movie is very quick and the laughs, while never gut-busting, come often enough to keep you amused. It just frequently seems there are opportunities missed. Rather than centering so much on the romantic comedy angle, a better movie might have been made that centers on G-Girl. With so many superhero movies coming out recently, it would seem that the genre would be ripe for more satire than this movie provides. The best jokes are those that focus on this part of the story, such as when Jenny refuses to stop a missile heading for New York because it would mean that she would have to leave Matt and Hannah alone together.

A good effort by those involved, but I was hoping for more. 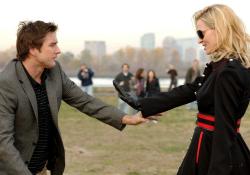 Luke Wilson and Uma Thurman in My Super Ex-Girlfriend.

Thurman is the best thing about the movie. It is perhaps her best role to date. Like her previous venture into super hero movies as Poison Ivy/Pamela Isley in Batman and Robin, 1997, she gets to play duo roles. One is a glasses wearing, mild mannered Jenny and the other is the chic blonde G-Girl. Thurman has good comic timing and should definitely do more comedies.

Wilson is as bland as ever. Why, the hell, does anyone keep putting him into movies? He adds nothing. Anyone could have played this role and many people could have done better. Imagine Ben Stiller or Luke's brother, Owen, in his role. Either one would have brought more humor and charm to the thankless role. G-Girl rides Matt so roughly during sex that she breaks the bed. Afterwards she says, "I'll get you a new one." To which he asks, "A new bed, or a penis?" It is not a bad line, but Wilson's dull delivery drains the humor right out of it.

My Super Ex-Girlfriend is a good date movie. It sneaks in some interesting questions about sexual roles. Lois Lane is never scared when Superman flies with her, but Matt is scared shitless when G-Girl flies with him. What's up with that?