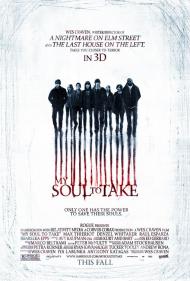 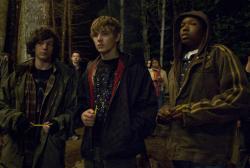 The first thing I have to establish is that I am not a horror film fan.  Although an occasional exception is made, most seem to be about a bunch of stupid people doing dumb things.   My Soul to Take is not one of the exceptions.

The movie opens with a serial killer with split personalities (souls).  After lots of blood splatter, he is "killed."  Skip 16 years to the day where we are generically introduced to seven teenagers.  They were all born the same night he was "killed."  They all attend the same highschool, and they start getting killed off on their birthday.

The main character,  Bug, is the center of it all.  He clearly has some issues.  He gets along with some of the seven, and not so well with others.  He is fascinated by the California Condor.  His class presentation on it was the highlight of the movie for my 16 year old.  He goes on about it so much that I thought it was going to play some symbolic role.  Other than it is a vulture that eats dead carcasses, I never felt it earned it's screen time.

The movie starts ridiculous, with people in scary, stupid situations.  "Hey dude, we just pretended to raise a serial killer from the dead. I think I will go for a walk in the woods at night by myself.   See ya at school tomorrow."   I am sure you cannot guess what happens to him.

The ending worked better as we learn some of what is going on.  It still never makes sense, but the couple in the house being attacked by the killer is fairly tense, in a horror movie way.  The power has been turned off and the adults killed, leaving the teens to fight for their lives.  I never said it was original, I said it decent for what it is.

The mystery of what is going on is the film's most unique plot point.  If you spend one minute thinking about it, you will have it all figured out long before any character does.   Of course thinking during a horror movie like this one is not something I would advise if you want to enjoy it in the least.