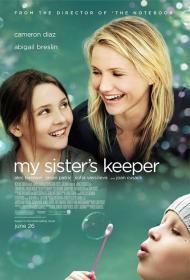 Cameron Diaz and Sofia Vassilieva in My Sisters Keeper.

A drama is intended to make us cry, or at least make us feel sympathy for a character or characters. A movie accomplishes that by allowing us to eavesdrop on people who are experiencing very personal moments in their lives. My Sister's Keeper has a story that is just ripe with possibilities, but the director, Nick Cassavetes, makes the mistake of never letting us witness those raw, private moments.

The movie opens with each member of the family giving a little narration. Dad is a fireman whose job takes him away from home for days at a time. Mom quit her job to take care of her daughter, Kate, who has cancer. The son, Jesse, is neglected, as most of the parents attention goes to Kate. The younger daughter Anna, has it worst of all as she was born to be a donor for her sister. She has donated bone marrow and stem cells over the years and now her parents expect her to give a kidney. She seeks out a lawyer to become medically emancipated.

Mom is furious over her decision and intends to fight her own daughter in court. Dad sees her point of view, but allows his wife to keep up the fight as their marriage is barely hanging on as it is. Jesse deals with it all by turning inward and staying out late.

The set up is ripe with opportunities for heavy dramatic scenes. Each character has a reason to lash out and yell. Each character is living a life they never chose, but hopelessly find themselves in. With all this frustration brewing I waited for it to come to a head, expecting some seriously coarse scenes of people spilling their guts from all of the pent up tension. It never came.

More than once Kate sits in her hospital bed while her mother argues with a doctor or hospice staff member. We barely hear any of it as the director chose to show it from Kate’s point of view. Remember Shirley MacLaines, "Give my daughter her shot!" scene in Terms of Endearment? My Sister's Keeper misses out on that scene more than once. Even when Kate eventually dies, it happens off screen through a narration. I wanted to see Diaz's and Patrick's reaction to that news. That is the moment that would have grabbed the audience by the throat and sent them home in tears.

The one and only time the actors are allowed to show any real frustration, is when Kate asks to go to the beach. Her dad takes her, while her mom yells that she needs to be in the hospital. Sadly, Cassavetes screws things up immediately afterwards by showing them all at the beach for several minutes without any dialogue.

The movie has a slight plot twist, but it is nothing too great and of course Nick Cassavetes never milks it for all that it is worth. A good drama is about letting the audience see and experience characters at emotionally frail moments. Putting those dramatic scenes off camera robs us of what makes a drama good. How effective would On Golden Pond have been if they simply drove away from the lake with a narration that Norman had a heart attack on the porch, but lived? We have to see and hear the drama unfold to empathize with the characters, not merely be told about it. My Sister's Keeper could have been so much more.