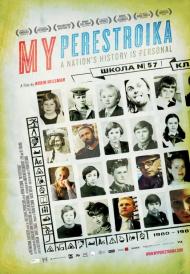 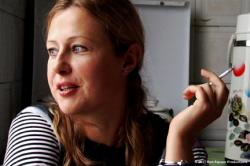 Single mom Olga talks and smokes in My Perestroika.

My Perestroika (Restructuring) tells the story of 5 classmates from Moscow’s School # 57. Now in their early forties they are among the last generation of children to grow up under communist rule in Russia. This documentary juxtaposes old news-reel footage and home movies from the 1970s, 80s and 90s with clips of these 5 individuals as they are today. It demonstrates just how much the former Soviet Union has changed and also gives a bit of a warning about just where it might be headed in the future.

The five subjects look back with nostalgia at their childhood’s behind the Iron Curtain. Although they openly discuss the limitations and day-to-day restrictions of life in the USSR, they also seem to have had genuinely happy school days. Borya and Lubya are married teachers with a young son. They are quite politically minded. Ruslan is an angry, aging punk rocker. Olga is an apolitical single mom struggling to stay above the poverty line, while Andrei is a successful businessman.

Although this is a documentary it plays more like reality television in the sense that these are no so-called experts or historians, just ordinary citizens talking candidly about themselves. If they are representative of the average Moscow resident then it is safe to say they smoke and drink more than your average American these days. Each of the five adults is shown smoking cigarettes nearly constantly and there are many references to beer and vodka.

One of the common themes mentioned is how restricted television programming was under the old regime. In one ironically humorous moment they tell how, whenever any national crisis arose, a production of Swan Lake was shown continuously on television. For example, during the attempted coup in 1991, Ruslan discusses how he woke up in the middle of the night, turned on the set to find Swan Lake playing, then looked out his window and saw tanks driving through the streets of Moscow.

Lubya tells how as a young girl she was so caught up with patriotic fervor that whenever the Russian National Anthem was played on television she would snap to attention, give a salute and become overwhelmed with tears. She laughs with incredulity at the actions of her younger self.

With a runtime of just under 90 minutes, My Perestroika doesn’t overstay its welcome. Sure it’s a bit dry at times and is more informative than entertaining but it offers a rare glimpse in to the lives of Russian citizens that we Americans would almost never get to experience. As a member of the same generation as these five subjects, I could perhaps, relate a bit more than the average viewer. 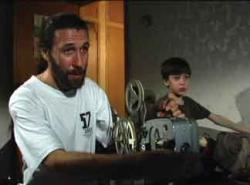 Borya and his son in My Perestroika.

I must confess that I wasn't exactly excited to see this movie. I mean, a Russian documentary brings to mind a long, bleak movie that's as about as exciting as a trek across the Siberian countryside. However, it didn't take me long to change my mind as I quickly found this to be a fascinating look into the human side of the USSR. And, as Patrick pointed out, at just 90 minutes, it never outstays its welcome.

As a teenager here in the USA during the 1980s, I remember the constant worry of nuclear attack by the USSR. The Soviets were this faceless menace that our government was protecting the world from. The Iron Curtain didn't just protect Russia, it also kept the rest of the world from seeing the people behind it.

This documentary pulls back the Iron Curtain and shows that while the policies of our two governments may have varied wildly, the day-to-day trials and tribulations of its people weren't really all that different. And of course it shows that to the people of the USSR, it was the US who was the evil empire that their government was protecting the world from.

You mention the smoking and drinking Patrick, but I also found it interesting how several of the characters mention how they are still living in the same apartment that they grew up in. And it struck me as funny how as a rebellious teenager Borya wore a USA t-shirt, much in the same way you see teenagers wearing Che Guevara t-shirts today.

Each of the five people that we are shown is in a situation we can relate to.

Olga is a fading beauty stuck in a dead end job that she hates. Lubya and Borya are aging hippy parents who live a married life that doesn't seem very different from the married life in America. Ruslan is an aging rocker who's musical dreams never quite panned out and now accuses his former bandmates of selling out. And Andrei, who is the most financially successful of the five, seems to have skated through the changing history of his country, applying to join the Party when he was younger, but then rejecting it later when he no longer needed it.

The nostalgia each character displays for their childhood is interesting. Although mainly it's just the general longing for childhood that we all feel at some time or another, you also see that as Olga puts it, there's a feeling that life was in some ways less stressful under communism.  You held a job for life and then retired on a pension.

With all five characters seemingly coming from middle-class backgrounds in Moscow, the perspective of the film isn't from Russia in general, but just from a single urban group of people. It would be the same if they interviewed five American adults who had lived in New York City their whole lives. It doesn't really weaken the film, but it is worth pointing out.

I agree with you Patrick that there is an added weight of poignancy for those of us who are from the same generation as the five in the film. Just as Lubya and Borya struggle to convey to their students what life was like under communism, so you have to wonder how much the children in the USA today, are able to understand what it was like to be on the opposite side of it. How quickly history is forgotten. 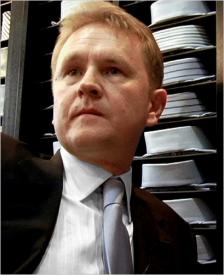 Andrei and his shirts in My Perestroika

There were two things that I read in school that completely changed the way I looked at the world.  The first was George Orwell's "1984", in which I learned to question everything written and spoken by anyone in charge.  Before that though, I had a history text book, that included a page from a Russian history text book that contradicted our text books description of the final days of World War II.  It spoke of how they had to come to the Allies aid in the east and made it seem as if they were responsible for the end of Nazi Germany.  The teacher led us to believe this was Russian propaganda being taught to their children.  Was it?  Maybe it was how they saw things or how they wanted to remember it.  Which leads to the question of how were we being taught?

Although there still remains cultural differences between the United States and Russia, we do not all bring bouquets of flowers on our first day of school, My Perestroika demonstrates that people are essentially the same all over the planet.  It is only our education and media that sways us into thinking otherwise.

Like Scott, I too remember during the 1980s how the Soviets were viewed as a nuclear threat.  Ronald Reagan's Star Wars plan was to protect us from an attack.  Here we see that as children these Russians were taught that the United States was a threat to them, that they must diligently be aware of.   We each viewed the other in quite similar terms.

What we get most from this film is that we were all taught to fear the other yet we are both so very similar.  Andrei speaks of how people vote for a leader based on a single issue personal to them.  The drunk will vote for someone if they can guarantee the availability of Vodka, a mother, if there is an affordable kindergarten.   How many Americans do the same, basing their vote on a single issue such as who is against or for abortion?

Out of the group interviewed, I was most fascinated by the teachers, Borya and Lubya.  Ruslan and Olga seem bitter because life has not turned out as they wanted.  Andrei has too many walls built up around him.  Out of the five, I got the least impression of who he is.

By the end of the film we see that Russia has changed and these five people have come through it mostly unscathed by the political events.  Ruslan and Olga seem to miss Communist rule.  Ruslan thrived on being a reactionary and now must work harder to find something to complain about.  Olga is tired of being a single mom and part of her misses the strict soviet life that dictated her every move, alleviating much of her responsibilities.

I found it fascinating that Borya and Lubya speak negatively of patriotism.  Should they not be proud of their country and heritage?  Patrick mentioned the scene where Lubya tells how as a young girl she would cry and salute whenever the Russian National Anthem was played on television. As adults she and her husband now see patriotism as a symptom of brain washing.  Borya though, states that in the modern age of the internet, it will be harder to with hold information and that their son will know freedom because of it.  That is until governments learns to control it Borya.