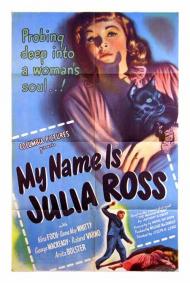 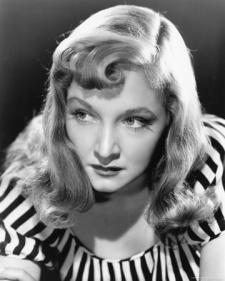 Released by Columbia Pictures in 1945, My Name Is Julia Ross shows just how beautifully the old studio system sometimes worked. This throw-away B Picture was shot in 10 days for less than 200 grand. Yet somehow the stars aligned just right, for the end result was one hell of a good movie.

With a running time of just over an hour this mystery thriller has taut direction and plot. It moves like gangbusters and never lets up until the final shot. Director Joseph H. Lewis seems to be imitating Hitchcock in terms of content and style. And I mean that as a sincere compliment. The fact that it is set in England and costars Dame May Whitty of The Lady Vanishes fame, only adds to the Hitchcock feel. Lewis certainly made the most of his shoe-string budget by using many close-ups to avoid showing the sets, or lack thereof.

This is one of those movies best enjoyed without any prior knowledge of the storyline. I won’t give any of it away but as I was watching it I kept thinking how so many old plotlines wouldn’t work since the advent of the cell phone. I will, however, mention the cast. The stunning Nina Foch has what was probably the best role of her career and she makes the most of it. She carries the movie and is in nearly every scene. George Macready plays a stab-happy psychopath. Audiences may be familiar with him from the movie Gilda where he also played the heavy. Dame May Whitty is chilling as his oh-so-civilized, yet equally cold-blooded mother.

Technology has spoiled modern audiences in terms of being spoon fed every visual detail. What today’s movies don’t do nearly as well as the old ones is pacing and dialogue. My Name Is Julia Ross is a perfect example. There isn’t a wasted shot in the entire movie and the dialogue snaps, crackles and pops. Take my advice and try to catch this one the next time it airs on TCM. You won’t be disappointed.