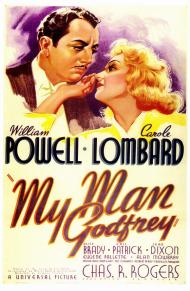 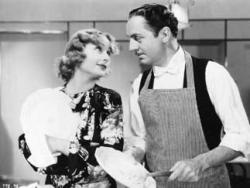 My Man Godfrey is the quintessential screwball comedy of the 1930's. It is fast paced and deliriously silly. Most of the credit for this goes to its two leads, William Powell and Carol Lombard.

Lombard plays Irene. She and her sister are spoiled rotten partying rich girls. While participating in an elaborate scavenger hunt, Irene comes across a vagabond named Godfrey. She needs to find a 'forgotten man' so she takes the bum with her for the contest and ends up hiring him to be the family butler.

Besides Irene and her sister, there is Irene's mother, who is just as dizzy as Irene. She has a protégé who imitates a gorilla for the mother's amusement. The father is frustrated beyond belief with his dopey family.

Before you know it Irene is in love with Godfrey. Godfrey at first just sees it as a harmless crush. Later he returns her affection. Irene's sister attempts to get rid of Godfrey by planting missing jewelry in his room.

Godfrey, however, is not just some bum. He is a college-educated man who just happened upon bad luck and ended up on skid row.

If the movie has any flaw it is the political correctness of the unemployed. In one scene Godfrey introduces a group of bums and says how they each had great jobs and are all actually smart men who just fell on hard times. Sure that may have been true to some degree, but there were and are some bums who are bums just because they are lazy or drunks.

Made in 1936, this movie set out to appeal to a depression era audience. It portrays rich people as stupid and poor people as just unfortunate.

Hollywood has a long standing tradition of showing rich people as bad or stupid or snobbish. I think I figured this out. Hollywood film makers and stars make so much money that they feel guilty for having all of that money. They make movies that portray the rich in a negative light so as to appear humble about there own wealth.

My Man Godfrey is a hilarious - however politically biased - film. Lombard bounces all over the place like a beautiful tweety bird. She is ditzy yet charming. Powell is the straight man who can be just as funny with a stare as some comics can be with a pratfall. 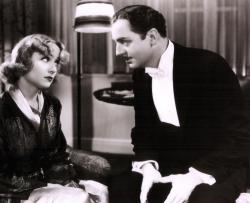 Eric's right, My Man Godfrey ranks alongside It Happened One Night, Bringing Up Baby and a handful of other movies as one of the greatest screwball comedies. These movies always feature a wealthy, beautiful and slightly ditzy young heiress who falls in love with a man of the people. Eric's right about depression era audiences wanting to see rich people being portrayed as power hungry or slightly insane and poor people as the steadfast voice of reason and honor. But is it really fair to blame Hollywood? They certainly did not invent the idea. A quick glance at the entire history of art, including literature, theatre, music and paintings shows corruption among the rich and powerful to be a very common theme. Since most of humanity is poor this makes perfect sense. And Hollywood, as a business, aims to appeal to the masses.

But back to the movie at hand. What is interesting about the chemistry between Powell and Lombard is that they were married and divorced a few years before making My Man Godfrey. There is a spark of tension and familiarity in all of their scenes together that adds to the humor. And this movie is funny. The scene Eric mentioned where Carlo imitates a gorilla is priceless. He climbs over the furniture and swings from a pair of fancy double doors all the while grunting and making ape faces. In my opinion this is one of the absolute high points of screen comedy. Later, there is a scene where Godfrey puts Irene - fully clothed - into a shower because she is pretending to have passed out, in order to keep him from leaving to go meet her sister. She jumps up and starts excitedly yelling 'Godfrey loves me! Godfrey loves me! He just put me in the shower!' Yes, Carole Lombard was one of a kind. It's a shame the Academy has rarely awarded comedic roles with an Oscar. Lombard was nominated for Best Actress but lost to Luise Rainer for The Great Ziegfeld. If ever a funny performance deserved an Oscar it is this one. 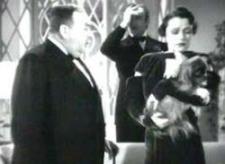 For my money, Alice Brady as Mrs. Bullock steals the movie.

This movie is a classic, there's no doubt about that. What I love about screwball comedies is that all they want to do is entertain for the sheer joy of entertaining. Their sole purpose is to take you out of your world and into the magic of the silver screen. It's no wonder that they flourished during the darkness of the Great Depression.

Although Lombard and Powell are both perfectly cast and terrific in their respective roles, I find that Alice Brady as the Bullock matriarch steals every scene in which she appears. She is so delightfully airheaded. She never has a clue what's going on, but she never lets that interfere with enjoying herself. I also love Mr. Bullock's relationship with Carlo.

Sure, this movie portrays the homeless living at the dump in a rather idealistic light, but it's hardly saying all bums are saints. You have to remember that at the height of the Great Depression, the unemployment rate peaked at around 25%, and so a great deal of the people living in shantytowns across the country really were the victim of circumstances. So it's not beyond the realm of plausibility that a group of similarly down on their luck men might congregate together in the same spot.

If Heaven is whatever you want it to be, I can think of worse versions of it than for it to be 1930s New York inside a Screwball Comedy. Smoking and drinking are done without fear of after effects. Everyone dresses so elegantly. The women are all beautiful and the men are all charming. And everyone ends up happy and in love.