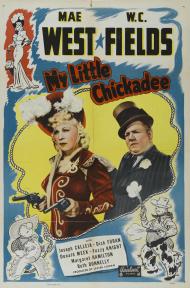 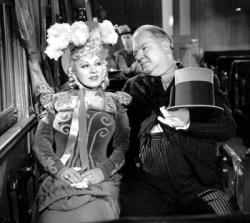 Mae West and W.C. Fields in My Little Chickadee.

The tagline says it all. Mae West and W.C. Fields were a comedy dream team. I can't think of another movie that starred two such completely unique powerhouse comics. Neither was an actor, they were both performers and they were both 100% original. Their images and personas were so iconic that they fit into nearly any time era, the 1920's or 30's, the naughty nineties, or the Old West as they are in this movie. Their comedy was so far ahead of its time that, in the right setting, I could see both of them still being successful today.

The plot is utterly silly and hasn't aged at all well. In fact it was dusty when the picture was released. West is Flower Belle Lee a woman run out of Little Bend for having an illicit tryst with a local criminal known as the Masked Bandit. On the train she meets Fields as Cuthbert J. Twillie. He immediately gets the hots for her and she gets the hots for the stack of money in his carpetbag. She gets an acquaintance to pretend to marry them so she can become a “respectable" woman. When the "preacher" asks her if she understands the requirements of marriage, West replies, "I've got a pretty good idea."

The train they're on gets attacked by Indians and West makes like a superhero. Shooting with a gun in each hand she calmly goes about picking off Indians. Meanwhile Fields is a bumbling coward. They arrive in Greasewood City and Fields winds up being made sheriff, while West, among other things, teaches a classroom full of young boys some arithmetic. On addition she says, "Two and two are four and five'll get you ten if you know how to work it." On subtracting, "If you meet a man with 100 dollars and leave him with 2, that's subtraction."

Fields is every bit as immoral as she. His motto is, "If a thing is worth having, it's worth cheating for." When a man asks him if the card game he is playing is a game of chance, he replies, "Not the way I play it, no." When they arrive in Greasewood City and check into a hotel Fields tells West, "Come, my fox, my flower! I have some very definite pear-shaped ideas that I'd like to discuss with thee." But his funniest moment is a story he tells about his bartending days on lower Broadway. He and this other bartender got into a fight with a very large woman. Fields says, “I jumped over the bar and knocked her down." The other bartender says, "No you didn't. I'm the one that knocked her down." Then Fields says, "Oh yeah, but I'm the one who started kicking her."

As for West another of her best lines is when she is in court and the judge asks her if she's trying to show contempt. She answers, “No, your honor, I'm doin' my best to hide it." The movie plays like a great tennis match. These two pros just keep lobbing the jokes back and forth over the net seeing who will run out of laughs first. They wrote the screenplay together and it really is more of a routine than a movie. But it sure is funny.

I have to mention that Margaret Hamilton plays (what else) an old busybody. This was the year after The Wizard of Oz and her character dresses and acts just like Miss Gulch.

The ending is cute. Each of the great stars says a line made famous by the other. Fields says to West, “Why don't you come up and see me sometime?" And she replies, "Yeah, I'll do that, my little chickadee."

Fields and West have such strong personalities that I can forgive this films lack of plot. Like Charlie Chaplin before them, West and Fields made a career out of playing a stock character. West is her usual worldly bad girl. She struts around with her hips swaying suggestively and a knowing twinkle in her eye. The mere sound of her bedroom voice was sexier than anything she actually said. Fields plays a horny drunk. “During one of my treks through Afghanistan, we lost our corkscrew. Compelled to live on food and water.” When his Indian friend asks about his new wife, Fields responds, “New is right. She hasn’t been unwrapped yet.”

Patrick mentioned the great last lines of the movie. From a historical film perspective, it is not only the end of the movie, but the end of an era. A new decade was beginning. A World War was starting in Europe. As the world became darker, Hollywood films became more innocent. The bawdy sex and alcohol humor of West and Fields seemed to disappear from film with them. They were true originals. 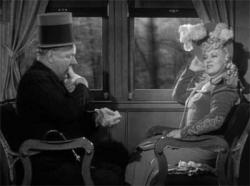 W.C. Fields and Mae West ham it up in My Little Chickadee.

You would think that the combination of Mae West and W.C. Fields would be comedy gold, but this is comedy bronze at best. Although credited to both, the script was written by Mae West with contributions by Fields and consists strictly of a series of one-liners and double entendres, some of which work, but most of which fall flat. It's only the fact that two Hollywood legends, who famously didn't get along, appeared together for the first and only time that this movie is remembered.

West was pushing 50 when she made this movie and yet she still has every man who meets her falling in lust with her.  She says, while teaching the class, "Oh, arithmetic... I was always pretty good at figures myself." All of the boys in the class then leer at her and give a wolf whistle or two, despite her being overweight and old enough to be their grandmother. I can understand why Fields might want to sleep with her, but not everyone else.

She also couldn't act. Her entire shtick consists of her reacting to an innocent line by someone else with a double entendre spoken in that distinctive style of hers. I found her more irritating than funny. I found her voice grating and I rarely laughed at any of her lines. Although she does get a few good ones, her knowing way of delivering them annoyed me. There's nothing sexy about her.

Fields fares better with me. Patrick, I agree with you that his bartending story is his funniest bit. Like West though, he doesn't really act. He just goes from one scene to the next, waiting for someone to set him up with a straight line so that he can deliver a comic zinger.

Patrick, you think that their comedy was so far ahead of its time, but to me most of it just seems hopelessly corny, although I'm sure I'll get thumbed down for saying so.