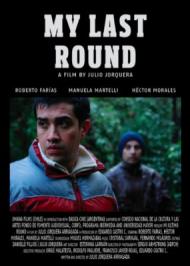 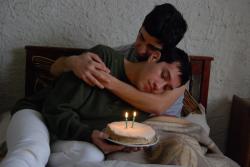 Héctor Morales and Roberto Farías in My Last Round.

My Last Round (Mi Último Round) is a tragic, Chilean set, love story from writer/director Julio Jorquera Arriagada. It marks his feature film debut. It tells of the ill-fated relationship between two very different men. Octavio is a boxer and on the surface he is not someone you would ever think was gay. Hugo is a shy young man who has just lost his mother. These two men meet and share an unexpected, yet decidedly passionate, kiss while on a camping trip, after which they move away to the big city together.

This film shatters stereotypes by showing that not all homosexuals are limp-wristed sissies. Not that there's anything wrong with limp-wristed sissies mind you, but it's a limiting, incomplete image that gets tiresome after awhile. These two men form a believable bond that doesn't paint their world in overly romantic colors. We see them going about their lives, getting jobs, and doing mundane housework such as cooking for each other.

The story quickly turns tragic however and the sad outcome is clear from very early on. It is frustrating at times to watch these two men displaying such poor judgment that you know can only lead to a bad outcome. With plot elements that borrow from American sports movie cliches (think The Champ), My Last Round (even the title is a give away) isn't exactly surprising in its denouement but the journey there is satisfying and extremely well acted by the two leads. Roberto Farías and Héctor Morales give simple yet profound readings of Octavio and Hugo, respectively.

My Last Round was given a very limited release at several film festivals in the United States. This movie is sad with a capitol S. Even the cinematography and the score both add to the bleak tone, which, even in its happiest moments is permeated with melancholy. Still I recommend it for anyone interested in seeing a film that offers a different take on love. It's a poignant look through a prism of an unusual color. It deserves a wider audience.