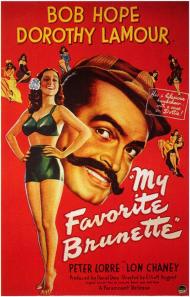 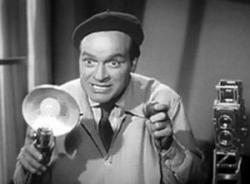 Bob Hope in My Favorite Brunette.

Bob Hope was great at the one-liners. My Favorite Brunette demonstrates just how great he actually was.

Hope plays baby photographer Ronnie Jackson. His studio is right across the hall from an actual detective agency. Hope narrates, much like a Raymond Chandler detective. 'You see, I wanted to be a detective too. It only took brains, courage, and a gun... and I had the gun.' The detective asks Jackson to answer his phone while he is away. While snooping in the detective's office, The Baroness Montay, (Dorothy Lamour) walks in and assumes Jackson is a detective. Smitten with her, Jackson lets her believe he is a real detective and agrees to help her.

Before you know it, Jackson is surrounded by bad guys, that include Peter Lorre and Lon Chaney Jr. He even finds himself questioning The Baroness's sanity. When a doctor says she, 'has been suffering from an acute case of schizophrenia, accompanied by visual aberrations and increasingly severe paranoiac delusions.' The quick thinking Jackson replies, 'And how is she mentally?'

After a car chase, Jackson breaks The Baroness out of an insane asylum and they join forces. 'I'm at my wit's end!' She tells Jackson, who replies, 'I passed there an hour ago.' However things only get worse when Jackson is found guilty of murder and sentenced to die in the electric chair.

Hope is often remember for his U.S.O. shows and his many television specials. He is likewise noted for his movies with Bing Crosby (Crosby makes a brief cameo here). However, this movie is all Bob Hope. His charm and quick delivery of jokes makes this a classic comedy satire. 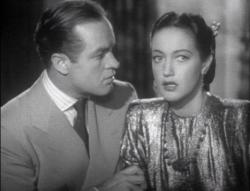 Hope was a very charismatic movie star. He had great timing and a constant twinkle in his eyes. He was also one of the first stars to break down the fourth wall in the middle of a movie and talk directly to the audience. During Crosby’s cameo for example he quips, “That guy will take any part.”

Alan Ladd has one scene as well, playing Sam McCloud the detective that Hope impersonates. The voice over narration is spot on and Lamour is good as the femme fatale leading Hope around by his famous ski-jump nose.

The scene that I laughed the loudest at was when he arrives at the sanitarium but thinks it is a fancy resort. He plays a few rounds of golf with a man who uses an imaginary ball, before realizing the man is a mental patient. It is quite hilarious.

Bob Hope was 43 when he made this movie but he seems younger. He displays an infectious vitality that keeps an audience enthused. He seems to be having so much fun that it makes you want to stick around to see what happens next, even if it is all absurdly predictable. My Favorite Brunette was such fun that it makes me want to check out the other two movies in the trilogy. 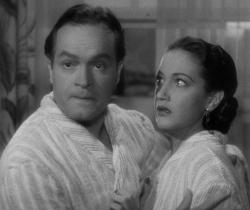 Bob Hope and Dorothy Lamour in My Favorite Brunette.

There are some funny moments and Hope gets some funny lines, but overall I seem to have enjoyed this movie less than either of my two brothers. The plot is nonsense and it's really just a series of gags and opportunities for Hope to spout one-liners. When the jokes are on, the movie works, but to be honest I found quite a few of them to be dated and corny, inducing more groans than laughs.

One of my favorite scenes is when Hope is running from the bad guys, looking for a place to hide. He runs to an apartment building where he starts hitting all of the door buzzers, saying "Hey baby, it's me Joe." into each one of them. There was always a character named Joe in movies in the 1940s and sure enough, nearly all of the women respond quite willing to let him up. As Hope hurries through the foyer and out the back door he mutters, "I have to remember where this building is."

There are several in-jokes scattered through the movie. Hope says, "All my life I wanted to be a hardboiled detective like Humphrey Bogart or Dick Powell or even Alan Ladd." and of course, as Patrick mentioned, it is Alan Ladd playing the detective in the office next door. My brothers already mentioned the Bing Crosby cameo and Lon Chaney Jr. seems to be channeling Lennie from Of Mice and Men, which he played in 1939. Hope even offers to buy him a rabbit.

As she did in the Road movies, Lamour plays the straight girl to Hope's funnyman. She makes a great femme fatale and is very easy on the eyes. As Hope says about her when he thinks she's crazy, "Nutty as a fruitcake, and with all that beautiful frosting.

I'm sure that Bob Hope fans will disagree with me, but I wouldn't call this one a classic. I enjoyed several of the Road movies and I do think Hope was quite funny. I just didn't think that overall this movie was quite as good as both of you lead me to believe it would be.