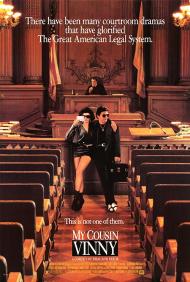 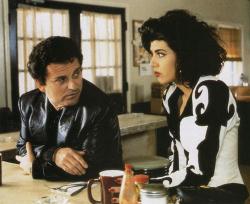 Joe Pesci and Marisa Tomei in My Cousin Vinny.

My Cousin Vinny was a hit when it was released in 1992, but is really only remembered today as the movie for which Marisa Tomei won the Best Supporting Actress Oscar. What really makes that memorable is that she won it for a comedic performance rather than a dramatic one. She's definitely a highlight, but the movie in general is funny, fairly charming and holds up pretty well nearly 20 years after its release.

Young Bill Gambini and Stan Rothenstein are driving from Brooklyn to California and decide to take the long southern back road route instead of the highway (it's a weak decision, but necessary for the setup). Shortly after visiting a convenience store in Alabama they are wrongfully arrested for the murder of the convenience store clerk. Unable to pay for an attorney, Bill's cousin Vinny, a newly minted lawyer who took six years to pass the Bar Exam, comes to their assistance, bringing his girlfriend with him.

Vinny, as played by Joe Pesci, is from Brooklyn. No, he is Brooklyn. Think every cliche you ever heard about Brooklyn and Vinny embodies it. Italian, strong accent, leather coat, gold jewelry and you know he has mob connections somewhere. His girlfriend, Mona Lisa Vito (Tomei) is equally as stereotypically Brooklyn.

The big city slicker coming to a small town filled with characters who spout homespun wisdom has been done to death in Hollywood and generally the writers pick one side or the other to highlight. Either the small town folk are all inbred idiots or the city slicker is an asshole who learns that life would be better if only they slowed down and smelled the roses. For the most part, My Cousin Vinny manages to avoid that trap. While a lot of the jokes are fish out of water jokes, the townspeople and Vinny are shown to be different without insulting either side, or maybe I should say, by insulting both sides equally.

My biggest problem with this movie is that Joe Pesci, while he is very funny in the role, is far too old for this part and he looks it. He's 21 years older than Tomei and was nearly 50 here. Reportedly DeNiro and DeVito were both considered for the part, but both of them would have been too old as well. Apart from his age, Pesci does a good job, but the scenes between he and Tomei never ring true. Far better are his moments with Fred Gwynne (in his final role) as the judge. Their scenes together are some of the funniest in the film. It isn't so much that Pesci couldn't play the part, but the script should have acknowledged his age.

Tomei is cute and funny and her wardrobe alone deserved an award. Her part is fairly small though, and while she does a good job with it, if you didn't know she won an Oscar for it, you'd never guess it. I'm glad to see a comedy get an Oscar, but she never has that moment where you think, "Wow, she's amazing." Good? Definitely. Oscar worthy? Ehhh.

The movie also runs nearly two hours in length, which is a bit long for a comedy, but the pacing is so good, it doesn't really feel that long. Maybe there could have been a slightly tighter editing job, but it's not a major problem.

Cute and funny, My Cousin Vinny is one of those quintessentially 1990s movies, but it stands up pretty well today. 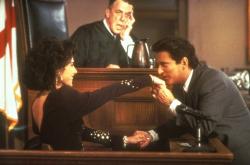 Melissa Tomei is indeed wonderful, and a regular little scene stealer, as Mona Lisa Vitto. Whether asking about Chinese food, complaining about her biological clock ticking, or giving expert testimony on automobiles... “'Cause Chevy didn't make a 327 in '55, the 327 didn't come out till '62. And it wasn't offered in the Bel Air with a four-barrel carb till '64. However, in 1964, the correct ignition timing would be four degrees before top-dead-center.” she is never less than hilarious.

Her funniest scene to me is when Vinny tells her he's going hunting with the prosecuting attorney. Her wide-eyed, indignant response is priceless. “Whoa. You're gonna shoot a deer? A sweet, innocent, harmless, leaf-eating, doe-eyed little deer.” For my money she deserved the Oscar and like Scott I found it refreshing that she won it for this comic gem of a role.

Joe Pesci may have been a bit too old but he pulls it off with such panache that it hardly matters. It is certainly plausible that Vinny didn't even enter Law School until he was over 30 and, as Scott mentioned, they make it clear that it took him six years and an equal number of attempts to pass the Bar. Regardless of his age he's great in the part.

Not since Bert Lahr's Cowardly Lion has a Brooklyn accent been funnier than Pesci's as Vincent LaGuardia Gambini. His back and forth with the judge over the word “yute” is hilarious. “Uh... did you say 'yutes'? What is a yute?” “Oh, excuse me, your honor... Two YOUTHS.” He really carries the movie with his outward bravado that fails to hide his inner insecurities. Fred Gwynne is terrific as the conservative by-the-book Judge Chamberlain Haller. I appreciated the fact that the movie doesn't turn him into a villainous caricature. His dry delivery and droopy face contrast nicely with Pesci's hyperactive style.

For a comedy this movie has often been cited for its realistic portrayal of courtroom procedure. It has been noted that Vinny is terrible at the things that are actually taught in Law School (at least at the beginning of the movie anyway) but he is a natural at those things not taught in Law School. And the script really keeps you guessing as to just how Vinny is going to exonerate his clients. There are a few clues given away earlier in the story but it is never predictable or obvious.

The courtroom drama has long been a sub-genre in film. I've never heard of the term courtroom comedy but if there is such a category, My Cousin Vinny belongs near the top of the list.

Joe Pesci in My Cousin Vinny

Tomei’s performance and Oscar win is not that surprising. Look at Whoopie Goldberg’s supporting Oscar win for Ghost (1990) or Kevin Kline’s for A Fish Called Wanda (1988).  All of these roles are not only that of the comic relief but are not wholly likable on the surface. Otto is an obnoxious idiot criminal, Oda Mae Brown is a con artist and Mona Lisa Vito is an annoying stereotype.  However, in the hands of these actors, these three otherwise tiresome characters become not only likable but scene stealers.

Joe Pesci is too old for Tomei but not too old for the role. He passes for 40 and by making Vinny older he appears more pathetic. Vinny is basically a loser who, through the events of this film, becomes a winner. If the role was played by a good looking twenty something actor, Vinny would not come across as pitiful. I agree with Scott that mentioning Vinny’s obvious middle age would not have hurt but neither does ignoring it. Besides, Pesci is too good in the role to hold his age against him.

In fact, as adorable and charming as she is, I will argue that it is Tomei that is too young for the role. The part of Mona Lisa was originally offered to Lorraine Bracco, who is some ten years older than Tomei. A thirty something Bracco complaining of wanting to get married would hold more water than a whining twenty something. I am with Patrick, Pesci may have been a bit too old or Tomei a bit too young but they both make it work to comic perfection. Their interactions are the highlights of the movie.

When Vinny puts Mona Lisa on the stand and asks her a question, Mona Lisa simply crosses her arms in defiance. The Judge says to her, “Would you please answer the counselor's question?” Mona Lisa responds, “No, I hate him.” These two young men’s lives are on the line and she can only think of her feelings. The biological ticking clock argument is classic. It ends with Vinny yelling, “BIOLOGICAL CLOCK - my career, your life, our marriage, and let me see, what else can we pile on? Is there any more SHIT we can pile on to the top of the outcome of this case? Is it possible?” After a comic pause, Mona Lisa says calmly, “Maybe it was a bad time to bring it up.”

If you think about the ages of the cast and the circumstances of the case being tried, you can easily find fault. However, this movie is too good to complain about. My Cousin Vinny not only works inspite of its flaws, it thrives on them and I count this as one of the best comedies of the 1990s.