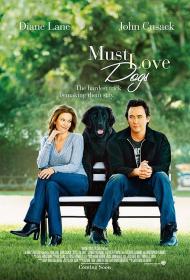 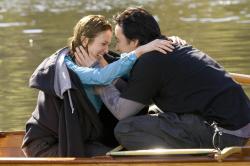 Where, oh where have all the good romantic comedies gone? As a fan of the genre I had hoped that in this summer devoid of good date movies that Must Love Dogs would be the one to bring a little romance to the box office. Sadly however, this is not the case. To enjoy this movie you really must love dogs or at least a dog of a movie.

Must Love Dogs is doomed from the start. The opening scene features an intervention by Sarah's (Lane) family. No, she's not a drug addict or an alcoholic. She's committed an even worse sin. She's single! Obviously her life will be unfulfilled and not worth living unless she immediately finds a man. She must now devote every waking second of her existence to finding that special someone. But not to worry, all of her relatives have someone they'd like to set her up with. Her sister Carol has even posted her info on a dating website, including in her profile that all potential applicants for the position of boyfriend, Must Love Dogs.

The rest of the plot really isn't worth going into since it's been done so many times and so much better before, but here's a summary (taken from the guide to Romantic Comedies 101). Sarah needs a man or her life will be worthless. She complains about her lack of love life to her best friend, who is, of course, a gay man, because apparently, according to these movies, every single woman is now issued with a gay best friend as soon as they hit puberty. She meets two men, one whom seems nice (Mulroney), the other who seems a little odd (Cusack). Eventually she must chose between them. One will turn out to be a lying philanderer and the other will turn out to be sweet and romantic. Along the way she'll learn a few shallow life lessons spoken in the kind of platitudes that you normally have to read a Hallmark card to find, she'll engage in some spontaneous and embarrassing singing and dancing with female relatives, before eventually realizing that the man of her dreams is right in front of her nose.

Given that there are so many complaints about how hard it is for actresses past the age of 35 to find work, it might seem refreshing to see 40-year old Diane Lane playing the lead in a romantic comedy. It might seem that way, but it's not, because while she is forty years old, the part could just as easily been played by a 20-year old, since her character's emotional maturity seems equal to someone that age. Helen Hunt in as Good as it Gets or Joan Allen in The Upside of Anger do a much better job with far better material as women older than the norm in Hollywood in romantic comedies.

Perhaps this movie is only meant to be enjoyed by single women. Perhaps the title to this movie has a double meaning. Or, perhaps I'm just glad that I'll never have to watch this movie again. 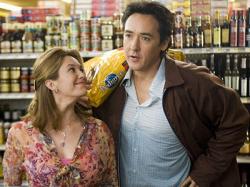 I suddenly realized, as I was watching Must Love Dogs, that so many "chick flicks" are emotional enablers. In this movie, and in most movies about women, the female leads are always beautiful, nice, charming and intelligent women who get scorned by a man. Thus, these types of movies all send the same message to the female viewer that, "it's not your fault , it's his." Sarah is never shown to have any flaw whatsoever. The only reason given for her husband leaving her is that he ended up remarried to a younger woman. Apparently, us men, do not want to be married to a beautiful, nice, charming, intelligent woman who happen to be our same age.

The blueprint for a great romantic comedy is When Harry Met Sally. One of the great aspects of it is that both characters are flawed. Harry is a sexist and Sally herself admits, "I'm difficult!" Yet, you like both characters and they fall in love in a realistic way.

Must Love Dogs has Sarah, the above described perfect woman, who must decide between a man who seems too good to be true and a nervous artist. With the two male leads, Must Love Dogs continues to comfort women viewers by showing the men as flawed. Bob is a player and it is not Sarah's fault that she sleeps with him because he lied. It's not her fault that she does not see John for the nice guy that he is because he is nervous and does not always present well.

Movies like Must Love Dogs, Mona Lisa Smile and Someone Like You are probably great cinematic comfort food for a woman who has gotten her heart broken. These types of movies always show the flawless female leads as being victims of heartless men. Never in these movies are the women held responsible for their actions of choosing to be with a guy who ends up betraying her. It is the guy who is always the villain. Chick Flicks?!