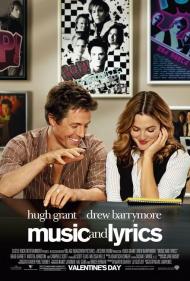 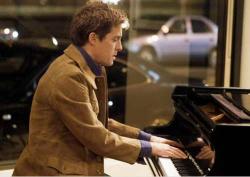 Hugh Grant in Music and Lyrics.

Music and Lyrics is a great romantic comedy that anyone can enjoy. It may entertain even more if you grew up in the 1980's. It opens with a music video that is reminiscent of any number of 80's singing groups. It looks like Duran Duran but it centers only on two members so it also reminded me of Wham! The groups name is Pop! Also like George Michael and Andrew Ridgley, one member went on to huge fame and success as a solo act while the other disappeared into obscurity.

Grant plays the Ridgley role, Alex. 15 years after Pop! broke up, his career is now reduced to singing at highschool reunions and amusement parks. The current pop princess, Cora, wants to work with him if only he can write a song in a week to make it onto her new CD. Enter Sophie as Alex's plant nanny. She adds a line to Alex's song while watering his plants and listening to him compose. Before you know it, he has convinced her to write the lyrics and he will write the music. They help each other out with their issues and of course fall in love.

With movies like 50 First Dates, Fever Pitch and now Music and Lyrics, Barrymore has become the queen of the romantic comedy. Whereas Reese Witherspoon has cornered the "cute" market, Barrymore owns the down-to-earth character. Her women are always flawed yet very approachable. Grant plays Grant. He has made a career out of playing one single character, that of the slightly snobbish, yet charming upper class cynical Brit. Whereas Barrymore garners laughs from acting dizzy and confused, Grant gets the laughs from being frustrated, dealing with people beneath his character. The Buddha loving Cora provides opportunity for both actors to shine. Also good in a supporting role is Johnston as a dominating wife and serious Pop! Fan. She bosses her husband around and fawns over Alex.

Music and Lyrics was a perfect Valentine date movie for my wife and I. We laughed throughout the movie. Stay through the credits as they replay the Pop! music video, with funny captions as in VH1's Pop up Video. 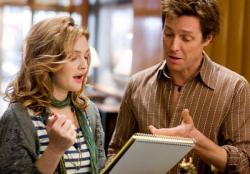 Drew Barrymore and Hugh Grant in Music and Lyrics.

Eric is right, this is a great romantic comedy. And given that good romantic comedies have become something of an endangered species, only makes this movie even better. Also being a child of the eighties, I definitely appreciated that aspect of the story as well.

In romantic comedies everything hinges on the two leads, and Grant and Barrymore are both terrific. They're likable and funny. You believe they're falling for each other and you want to see them end up together. Sounds basic, right? But then how come so many recent romantic comedies get those things wrong?

Grant actually has two subtly different characters in his repertoire from which he's made his career. There's the shy, socially bumbling Hugh ala Four Weddings and a Funeral and then there's the cockier, more arrogant Hugh ala American Dreamz and The Bridget Jones' films. His character here falls somewhere in between those two modes.

The weakest part of this movie is the song that Alex and Sophie write together. It's a sweet little song, but not one that I believe someone like Cora would ever agree to perform without updating the sound. It's adult contemporary-lite verging on elevator music. It's not really important to the overall story, the actors do make you believe that she's bought it.

Hopefully fans of romantic comedies and VH1's "I Love the 80s" will make this one a hit. 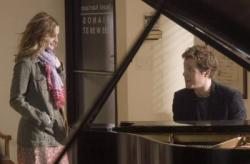 Drew Barrymore and Hugh Grant working on Music and Lyrics.

While I enjoyed this movie I wasn't as enamored with it as my brothers were. I agree that Grant and Barrymore are both terrific individually, but as a couple they lack chemistry. Sophie needed to be even quirkier while Alex is a bit dull to have been a huge pop star (I wonder what Ben Stiller would have done with this character). Both actors are talented enough to make the most of the script but they seem more like friends/partners than lovers. I wish the screenplay had gone for more of a screwball comedy feel by upping the zany factor. Instead we get yet another derivative rom/com with a contrived argument and break-up followed by an 11th hour reunion.

The climax is a bit much. Alex, who hasn't sold out an arena in years, is allowed to commandeer Cora's spotlight in order to sing a treacly love song to Sophie. The fact that this young audience, that paid to see Cora, sits in rapt attention while Hugh Grant tortures us with his bad singing is ludicrous. Sure he is able to pull off the silly but infectious Pop! dance songs but a tender ballad is quite beyond his range.

The script is strictly by the numbers and it could/should have been funnier. Of the jokes, Hugh Grant gets the best ones like, “Anybody see 'Battle of the 80's Has-Beens' last night? That Debbie Gibson can take a punch.” and “I did not pander. I just told her exactly what she wanted to hear.” Not all the jokes work though. Cora saying, “I'll show you the roof. It's upstairs.” is just plain stupid and there are too many unfunny references to Alex's tight pants.

On paper this movie seems like a sure fire hit (it grossed a respectable but not exceptional 50 million domestic). Hugh Grant and Drew Barrymore are two of the most likable stars working in Hollywood during the last ten years and 80's pop music is rife with spoofable possibilities. Music and Lyrics is a predictable, if still entertaining, romantic comedy that let slip its chance to be a classic screwball farce.