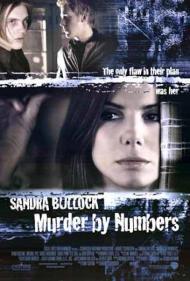 Michael Pitt and Ryan Gosling in Murder by Numbers.

Murder by Numbers is yet another movie featuring characters based on the infamous Leopold and Loeb killers of the 1920s. Ryan Gosling and Michael Pitt play Richard Haywood and Justin Pendleton. Richard is the coolest rich kid at their California high school while Justin is a bit of a geek, gifted at science, particularly forensics. Together they plan and commit the perfect murder, believing that true freedom can only be achieved through a criminal act, and to show the world just how much smarter they are than everyone else.

Sandra Bullock stars as Cassie Mayweather, a tough-as-nails homicide detective haunted by a violent act in her past. She uses sex like a man in order to avoid any actual emotions or commitments. She wastes no time in seducing her new partner (Ben Chaplin) as they attempt to solve the seemingly random murder of a local woman. I can appreciate Sandra Bullock in romantic comedies but this role shows her limitations as a dramatic actress. She never really connects with the character and her scenes are the weakest in the movie.

Whenever Ryan Gosling or Michael Pitt are onscreen, however, the movie manages to at least be interesting. Richard and Justin have a gay subtext to their relationship. Richard is always putting his hands on Justin’s head and stalks his whereabouts jealously. At one point he tells Justin, “I'm the only person who really cares about you... You know, I think I'm the only person who sees how incredible you really are.”

But the script (perhaps not wanting to offend its target young male audience) makes a point of showing them as heterosexuals by introducing a girl for them to fight over. About whom Richard bitterly tells Justin, “Please, that chick spreads like peanut butter.” And then proves it by giving Justin a video of himself and the girl having sex.

There are several plot twists that are easy to spot from quite a long distance off. The climax of the movie takes place in a Hitchcock-inspired abandoned lodge on a cliff overlooking the Pacific. Murder by Numbers has a connect the dots plot by numbers. It comes to life only when Michael Pitt and (especially future superstar) Ryan Gosling (already demonstrating his immense charisma and talent) are in the picture.