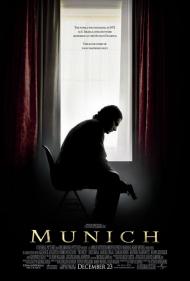 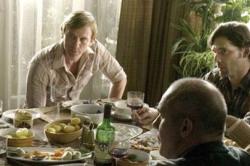 The previews to Munich led me to believe that this was going to be another of Spielberg's heavy-handed message movies, loaded with melodrama. Actually, it's much more of an espionage thriller along the lines of a John Le Carre novel. There is melodrama and there is a message, but it is delivered in a very palatable manner and in a way that never detracts from the story.

While the title of the film is taken from the location of the 1972 Olympics, where 11 Israeli athletes were taken hostage and later killed by a terrorist group known as Black September, that event is told very quickly and the main thrust of the plot deals with the aftermath of that tragedy. In response to the murder of their athletes, the Israeli government sets up a top secret hit squad, charged with the assassination of the masterminds behind the Munich terrorist act.

The team of hitmen is lead by Avner, played by Eric Bana. I've never really been a fan of Bana's, as his acting always seems so stiff, but here he delivers a solid performance as a man caught between loyalty to his country and his own conscience. At first he is able to satisfy himself that the deaths he is causing are justified, but as they continue and he sees each leader he kills being replaced by someone else just as evil, he starts to question the quest that has been set for him.

Supporting Avner is a ragtag group, none of whom, apart from Daniel Craig (the future James Bond), you would ever guess by their appearance, to be an assassin. Like Avner, they're just doing a job for their country. While the entire cast is superb, to my mind, it is Ciarán Hinds who delivers the Oscar worthy supporting performance as the skeptical member of the group.

Reportedly, Spielberg rushed this movie into development in able to have it released in time for Oscar consideration this year. Nothing in the film suffers from this, apart from perhaps needing one more edit. The movie runs 2 and a half hours in length, and while the first hour, which is the most action packed, flies by, the remaining hour and a half does drag in parts and at times seems repetitive.

One thing the movie does not skimp on is gore. When someone is shot, or blown up, or stabbed in the forehead, it is shown in graphic detail. It's a dirty job that these men are asked to perform and their actions are in no way sanitized for the screen. And although at times they might question why they are doing this job, they rarely hesitate to perform it.

More and more recently the marketing of movies seems to be separate from what the movies are actually about. Munich, while busily advertising itself as a weighty Oscar drama (and I won't lie, the movie does carry weight), is failing to show that it is also an intelligent spy thriller. Perhaps the most intelligent since 1965's The Spy Who Came In from the Cold. 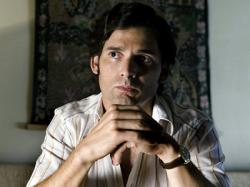 No Scott. This is another of Spielberg's heavy-handed message movies, loaded with melodrama. Spielberg's point in this movie is to comment on violence and the reaction to violence. He humanizes the Palestinians and the Israeli terrorists. He shows that they have families and lives outside of their murdering occupations. He has a scene where a Palestinian explains why he is fighting for a "home." Spielberg claims during an introduction on the DVD that he did not actually take sides with this movie. What a joke!

In his attempt to be unbiased he forgot to humanize one very important group; the innocent athletes who were ruthlessly murdered in Munich. These men were not soldiers. They were not assassins. They were the innocent victims of a bunch of cowardly terrorists who prey on unarmed civilians. With that in mind you cannot be unbiased when dealing with the subject of terrorists.

The Palestinian terrorists chose to attack innocent victims who had nothing to do with them directly. The Israelis responded by killing the men who masterminded the attack and murders. That is not even close to being the same thing. The murdered athletes are given no back story or even any discernable dialogue. They are just victims who died. The terrorists are married with children and are fighting for a cause. The point of terrorism is to shock and awe people into seeing the terrorists' point of view. To see them as victims who are just fighting because they have to. Thank you Mr Spielberg for assisting the members of the terrorist group, Black September, in getting that message out.

Spielberg shows Avner as a man who struggles with being an assassin and a married father. The scene of him having sex with his wife while thinking of the athletes being murdered is far too strange to make sense. I don't even want to meet the man who can perform sexually while visualizing that. Spielberg wants very much for Avner to be as human and sensitive as possible. Avner just comes across as a contradiction. One minute he kills an unarmed naked woman and the next he questions why he is killing the head of terrorist organizations. One minute he's compartmentalizing his actions and the next he is all emotional about it. A man this sensitive should not be an assassin.

Or like having someone as conservative as my brother Eric write an unbiased review of a Steven Spielberg movie. Actually though I do know what he means, although I don't necessarily agree with him. The movie does at times seem to show the Mossad agents and the Palestinian terrorists as being morally on the same plane. As if they are both just two necessary evils. But however you parse it that is just one small piece of the bigger puzzle.

This movie is really an indictment of violence itself. It very clearly shows how one act of terror leads to farther acts of violence, which in turn beget even more violence and mayhem. In hunting down the men who murdered those innocent athletes the Israeli hit team often puts innocent lives in danger, even blowing up most of a hotel in one scene. Only to learn that these men have already been replaced by even more hardened terrorists. It's enough to make anyone question the morality of their mission. But -and this is the most important point- at no time does the movie ever say that a nation shouldn't retaliate after it's been attacked.

And Spielberg didn't even include one documented event where Israeli agents killed a Moroccan waiter after mistaking him for one of the eleven Munich terrorists. If his mission was to cast the Mossad agents in a negative light, why omit this incident? And as for his decision not to focus on the athletes' lives, that is because they represent every faceless and nameless victim of all terrorist attacks. They are unquestionably the victims of the movie but this story is about the aftermath of the Munich Olympics.

In some ways Spielberg wanted to have his cake and eat it too. While condemning violence he revels in the cinematic gore. It's all a bit schizophrenic. Violence is bad but isn't it cool to watch in graphic detail? And the movie moves at a snail's pace. It could easily be 20-30 minutes shorter without losing anything of importance. I did enjoy the acting. I agree that Eric Bana is less stiff than normal. He is actually quite good, especially during the movie's more emotional second half. It's interesting seeing a pre-Bond Daniel Craig and I also agree that Cirian Hinds' performance is the standout.

I can only assume that the shadowy French informant who seems to know the whereabouts of every single terrorist in the world was an amalgamation of several men. His scenes feel too pat and convenient. As for the climactic scene where Avner remembers the final flashback, in which the tragic fate of the Israeli athletes is revealed, while having sex with his wife. Yes it's a bit overdone but I think Spielberg is attempting to show just how much these events have seeped in and poisoned Avner's personal life. He has no inner safe-house left. Even during the most intensely pleasurable and intimate moments he cannot escape his past. It's not exactly a happy ending. The final shot gives a visual warning that came 4 years too late. Spielberg shows the twin towers with a caption telling us symbolically that 9 of the 11 men were eventually assassinated.

Munich is an interesting failure.