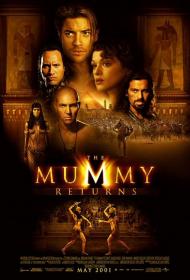 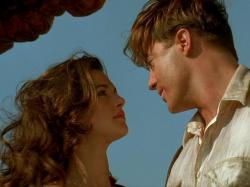 And so the Summer movie season of 2001 is launched and appropriately it is kicked off with a sequel. The Mummy Returns and with it comes the big budget, special effects heavy, high adventure movies that we've all come to associate with the Summer blockbuster.

The Mummy Returns takes place 8 years after the original. Evie and Rick are married and have a son, but this hasn't slowed down their adventuring, as we see in the opening, when they uncover the bracelet of the Scorpion King. This leads to a plan to resurrect the Mummy from the first movie so that he can battle the Scorpion King and take control of his army and destroy the world. Of course the O'Connell's can't let this happen, and there, in a nut shell, is the plot of the movie.

But who cares about plot!?! In this movie, plot is just a way of explaining how to move from one action scene to the next. And there is some good action going on here. There's a double-decker bus ride through the streets of London, complete as all bus rides should be, with a battle with the undead. There's bugs, and pygmy mummies, chases, spills, thrills, tidal waves, and armies battling armies. This movie is loaded with computer generated action sequences.

The problem with all of this action is, that no matter what the situation, I never felt that any of the main characters were in danger. It was almost like a cartoon. A big budget, partially live-action, cartoon where no matter what happens, you just know that no one is going to die.

This movie has no edge. Maybe that's what it was trying for, to create a family friendly adventure movie that you wouldn't be afraid to take your kids to see. If that is what the makers of this movie wanted, then they succeeded royally. It's a fun movie to watch, if you can check your skepticism at the door.

Personally, I wasn't that big a fan of the first Mummy movie. It seemed like a big budget 'B' movie and so does this one. In this one, I found the boy annoying, the plot full of holes, and as I said before, a lack of danger and suspense leading to a movie without punch.

Maybe I'm just a jaded movie reviewer, and maybe this is just a Summer action movie during which I am supposed to check my mind at the door and just sit back and relax, but I couldn't really. I wish I'd seen this movie when I was ten. I think I would have loved it then. However, I'm not ten anymore, and as an adult I just expect more from movies than I did when I was a kid.

I expect that this movie will do quite well at the box office and deservedly so. People who loved the first movie, will love this one as well. It will entertain many people. And even I can't say that I wasn't entertained by parts of it. They got many things right when making this movie. The effects are quite good. I like the way they matured the relationship between Rick and Evie, they are no longer bickering, but rather deeply in love and supportive of each other. The actors all do a good job, although don't expect any Academy Awards for acting, this is just not that kind of film, and there are, as in the first, some funny moments as well.

So to sum up this meandering review, let me just say that this movie is slickly packaged entertainment of the kind that won't tax your brain and is gentle on the eyes. A movie that succeeds in everything it sets out to do, just personally, I wish they'd set out to do a little more. 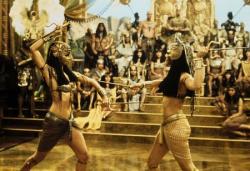 Patricia Valazquez and Rachel Weisz in The Mummy Returns.

The Mummy Returns takes place 8 years, a marriage and a son after the first Mummy movie. The happy couple is still up to its adventurous ways. Their son Alex is following in his parents footsteps. He has his fathers bravado and his mothers knack for ancient languages.

Alex, unbeknownst to his parents, places an artifact on his wrist. Most of the movie is the O'Connells chasing after the Mummy to save their son whom the Mummy is using, via the bracelet, to find the Scorpion King.

The movie is action packed, special effects heavy entertainment. Not since Star Wars Episode 1 have I seen this much use of computer animation in a live action film. For the most part the effects are all very good. I particularly liked the large battle scenes.

What makes this movie work for me is the characters. They are by no means in-depth, but we know them already from the first movie and they are very familiar. Unlike Scott I did not find Alex annoying, In fact I liked how he always pissed off the big guard who kidnapped him. Jonathan is one of my sons favorite characters from the first movie. He was quite happy to see him in this sequel. In fact one of the bright spots for me in this sequel is that the entire original casts returned to make it.

The movies weak area is definitely the plot. If you read my review of the first Mummy movie you will see that I felt it had some plot holes as well. This one meanders on the chase scenes. Pointlessly going from one ruins to another. The flashbacks were interesting, but what was with the tattoo on Rick's arm. The writer, Stephen Sommers, throws character background at you sporadically that was never mentioned in the first movie. Its like Star Wars never mentioning Qui Gan Jin.

If Sophie's Choice is at one end of the spectrum then this is at the other. It is great no brainer entertainment. 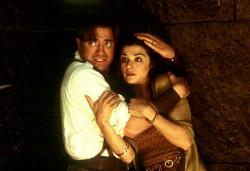 Yeah, yeah, this movie has big-budget computer generated special effects and non-stop over-the-top action. So what. The plot is so ridiculously silly, the characters so completely one dimensional and the action so utterly unbelievable that only a very young child should enjoy it. Much like the old Batman television series that I loved as a kid only without the campy sense of humor. Sure The Rock looks good but he is only in one very brief scene, other than that the only thing I enjoyed were the pygmy mummies. 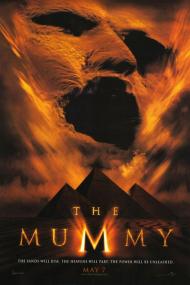 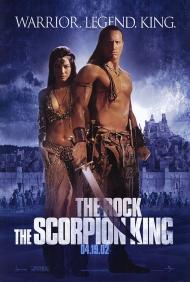 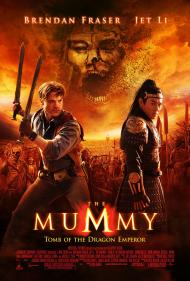