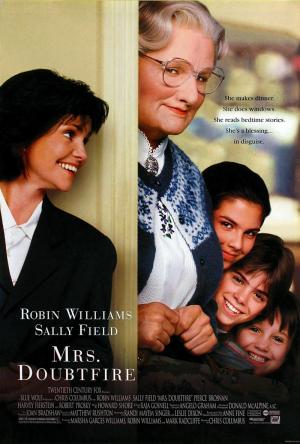 Take away all of the supporting roles and Robin William’s filmography contains many more misses than hits. His insistence that he play dramatic roles only occasionally paid off. No matter what he does the rest of his acting career, he will forever be remembered for his frenetic comic timing and wisecracks. Mrs. Doubtfire was made during the height of Robin William’s film career, when he was in high demand and at the peak of his energetic talent.

Having just provided the voice of Batty in FernGully: The Last Rainforest and Genie in Aladdin, the previous year, it seemed an obvious device to open Mrs. Doubtfire with Williams as Daniel Hillard, doing voice work on a Chuck Jones carton. Daniel loses that job, which eventually leads to an argument with his wife, Miranda, telling him, “It’s over. I want a divorce.”

Sally Fields is in the thankless role of Miranda. She is the heavy who divorces the father of her children, whom they adore, and then makes it very difficult for them to spend time together. Fields has the task of trying to make Miranda into some sort of a sympathetic character. Although the script is working against her, she nearly pulls it off.

The legal proceedings go horrible for Daniel, with him only allowed visitation with his three children once a week. After discovering that his ex-wife intends to hire a nanny, Daniel employees his makeup artist brother, and his boyfriend, to make him into a fat old British woman, so that he may apply for the job. Although the disguise is very well done, you have to just accept that his own family does not recognize who Mrs. Doubtfire really is.

As the nanny and housekeeper, Daniel learns exactly why his wife fell out of love with him and he becomes a better father to his children. Whereas before he was their friend, as Mrs. Doubtfire, he takes on the less fun aspects of being a parent, such as discipline and instilling responsibilities. He finally takes on some of the burden that Miranda has had to carry.

Meanwhile, Miranda is being pursued by an old college flame, Stu, played by Pierce Brosnan, who was still a couple years away from playing James Bond. Daniel, of course, sees him as a threat. After Miranda comments to Mrs. Doubtfire that Stu is fabulous, Mrs. Doubtfire responds, “If you like that handsome rugged type. But personally I prefer short, furry and funny.” When Mrs. Doubtfire first meets Stu, she tells him he must be overcompensating for having such a large car. Mrs. Doubtfire really gives Stu the business when Stu invites them all to his club to go swimming. When his youngest daughter, played by the adorable Mara Wilson, comments that Stu has a flat stomach, unlike her father, Mrs. Doubtfire comments, “Not everyone has a personal trainer.”

From start to finish, Mrs. Doubtfire provides laugh after laugh, and nearly all due to Robin Williams. Some of the funniest scenes are between Williams and Harvey Fierstein as they decide Mrs. Doubtfire’s look. After being made up like Barbra Streisand, Williams says to Fierstein, “It's not working. I need to go older.” Fierstein responds in his perpetually hoarse voice, “Older? You mean like a Shelly Winters older, or Shirley MacLaine older?”

Mrs. Doubtfire also provides some solid heart felt moments. This is a film about divorce and no, it is not about the parents getting back together. The end of the film has a scene of Mrs. Doubtfire explaining that families have many different makeups.

Interesting to note is that Marsha Garces Williams was a producer on this film. She was married to Robin at the time. She had been with him since Good Morning Vietnam (1987), where she was his billed assistant. They married in 1989, had two children together but divorced in 2010.

Although a comedy that requires some suspension of disbelief, such as the costume changes in the restaurant, Mrs. Doubtfire may still hit emotionally home with many people in a comforting way. 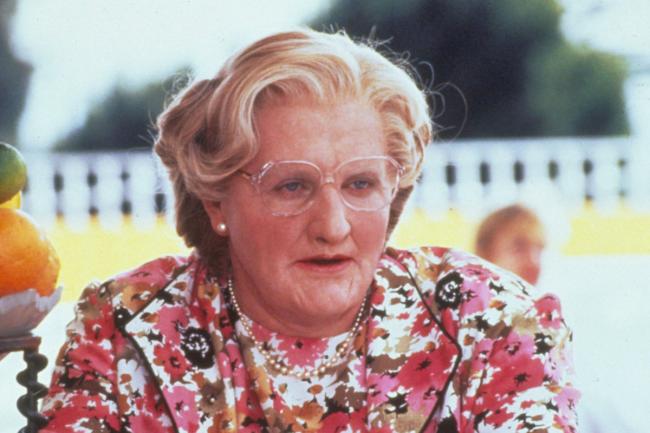 Mrs. Doubtfire requires a HUGE suspension of disbelief. Although the makeup job on Williams is indeed excellent and fully deserving of its Oscar win, it is still an incredible stretch that Miranda wouldn't recognize the man she's been sharing a bed with for years. When the door opens to reveal Mrs. Doubtfire for the first time, the face is hidden, but the silhouette is still definitely a masculine Robin Williams. But then, accepting that characters in a cross-dressing story don't recognize another character is really a man or a woman has always been a problem in these sorts of movies and one that you just have to go along with to enjoy the film. And this is an enjoyable film despite this and other problems.

A bigger problem with the story is its setup. There's simply not a good enough reason given for Miranda denying Daniel access to their children. Apparently, in the novel this film is based on (which I've never read), their divorce is more acrimonious, but here the one thing that Miranda and Daniel seem to agree upon is that he's good with the children, being basically a big kid himself. The story tries to skim over this point, even trying to make it seem as if it's the judge who's denying Daniel access instead of Miranda. Of course without this denial of access, nothing that follows would be needed.

As Eric said, this was Robin Williams at the height of his powers and energy. Whatever demons drove him, they also blessed him with the ability to improvise faster than almost any other comic who ever lived. Not everything he says is a winner, but he says so many things, so rapidly that when one joke fails, the next one is there before you have a chance to groan. Reportedly director Christopher Columbus would first film each of his scenes as scripted and then afterwards put 2 or 3 cameras on Williams and let him "play" as Williams called it. Columbus later said he had enough material for several movies, some of which were wildly different in tone, and which he could have cut together into NC-17 or R rated versions, along with the final PG-13 version. The one downside of all the improvising, is that the resulting film does run over 2 hours, which is a bit long for a comedy.

One rare aspect of this film is that the leading lady is actually older than her two male co-stars. Sally Field was 47 years old at the time, while Williams was 42 and Brosnan just 40. That's fairly close to the same age by Hollywood standards, but considering that in plenty of movies the male lead has a good 20 to 30 years on their female co-star, it is noteworthy. Field is a youthful 47 and her perky likability helps in what Eric accurately described as a thankless part.

Brosnan's part is even less substantial than Field's. He's really just there as male eye candy. Thankfully, the filmmakers opted not to make him the story's villain, which would have been a cliche too far, but instead he is a genuinely nice guy who cares about Miranda and her children. One unintentionally funny moment comes when Brosnan mentions Mrs. Doubtfire's vague Scottish accent. Coming from the Irishman who made a career of putting on an English accent, this made me laugh.

The movie is far from perfect. The farcical restaurant quick change scene, for example, is straight out of a sitcom and undercuts some of the film's emotional impact. However, as a showcase for Robin Williams and his amazing stream of consciousness improvisational skills this movie is definitely worth the price of admission. A long gestating sequel was finally picking up steam shortly before Williams' death. As sad as the end of his life was, at least he left behind a legacy that includes this film.