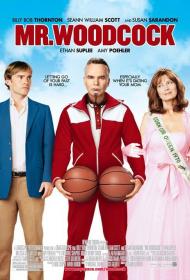 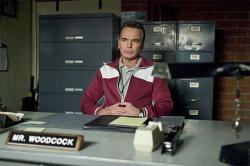 Mr. Woodcock has the right cast, in the right place. Unfortunately, Gillespie has no idea how to direct this comedy and milk it for all it's worth. He should have stuck to television commercials.

John Farley is a successful self help writer who is to recieve an award from his hometown. Upon arriving home he discovers that his widowed mother is going to marry his old gym teacher, Mr Woodcock. Memories of a tortured gym class fill John as he comes to grips with the impending nuptials between his mother and the man who abused and humiliated him constantly in gym class.

The movie is packed with potential. A self help author forced to deal with his childhood nemesis could have been hilarious. Unfortunately the laughs rarely come. The problem being that the actors never react to anything in a funny way. Some of the best moments are when Woodcock torments his students, but they could have been so much better had the boys reacted more to him. In one scene Woodcock hits the boys in the crotch with a bat to see who is wearing their protective gear. Other than Farley touching himself to be sure he has a cup on, no one reacts in a funny way. Why not show the other students in fear as Woodcock swings his bat. Why not have even one of them even grimace? What a waste of many possible laughs.

The best jokes are provided by Saturday Night Live star Amy Poehler. She plays John's drunk agent. She makes the most of her lines. "Could I get a real bottle please. I am a alcoholic not a Barbie doll." Even such simple lines like, "You hicks crack me up." Is made funnier because of her delivery. She is the funniest person in the movie but also has the least amount of screen time.