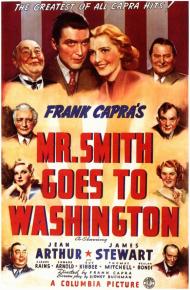 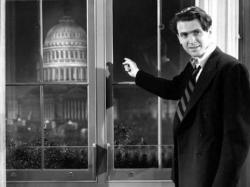 As a full time film buff, and a part time political junky, I have been meaning to watch Mr. Smith Goes to Washington for a long time.   Even though it was made more than 70 years ago, it still resonates today with its look at corruption in politics, as well as demonstrates that some in Washington are more concerned with their power, than doing the job they were elected to do.

The film opens with the death of a Senator from an unspecified midwest state, and an unspecified political party.  This forces the Governor to chose someone to take his spot.  Like Rod Blagojevich taking offers from the highest bidder for Obama's vacated Senate seat, the governor in the movie is told by a very rich constituent, Taylor, and a senator, Paine, who he should appoint.  After being offended by his wife and kids for not having any balls, he comes up with his own man, who he sees as harmless and controllable, Jefferson Smith.

Other than perhaps Gary Cooper, no other actor could have played the role of Smith as convincing as James Stewart.  Smith is the leader of a Boy Scout type organization called Boy Rangers.  He is as patriotic as they come.  His hobbies include raising pigeons (symbolism) and American history.  He is as innocent socially, as he is ignorant politically.  His patriotic feelings may come across as old fashioned to some, but Stewart plays it all very sincerely.

He arrives in Washington wide eyed and overwhelmed.  He sees the sights and gets emotional over the landmarks.  The Lincoln Memorial plays a key role as does the Gettysburg Address.  Part of it is recited out loud, "...that government of the people, by the people, for the people, shall not perish from the Earth."  Smith believes with all his heart in those words.  He has honor and integrity, but he is surrounded by men who have none.

One of my favorite lines is when a page shows Smith where his Senate seat is.  Smith says to him, "I'm just gonna sit around and listen."  The page responds, "That's the way to get reelected."

At first it is the media that teaches him a lesson when they print photos of him with insulting captions.    He takes it upon himself to beat up every reporter who lied about him in print.  How many political campaigns have been destroyed because of published photos?  Anyone remember Gary Hart?  If you do not it is because a photo of him with his mistress Donna Rice, was strategically released to the press during his campaign for the Democratic nomination in 1988.

In the process of Smith beating up the reporters, they inform him that he is just being used by his Governor, Paine and Taylor to pass a Bill.  Paine even tells him not to worry about reading the Bill, it is full of lawyer speak and he would not understand it anyway. He tells Smith he will let him know how to vote on it.

This is like many real Bills in real life, such as the 2,409 page Obama Health Care Bill.    John Conyers (D-MI), Chairman of House Judiciary Committee said, "What good is reading the bill if it’s a thousand pages and you don’t have two days and two lawyers to find out what it means after you read the bill?”

With the knowledge that he is being used, Jefferson Smith confronts Paine and Taylor.  Smith refuses to go along with them.  They start a media blitz to get rid of him.  Taylor has the media run made up stories about Smith, while Paine frames him for taking money on property they claim he owns, but does not.

The media being used to sell  an agenda is right on target to today.  When emails from CRU were released and revealed that so many Global Warming statistics were made up or changed to support Global Warming, the general media ignored it.  A few days after this broke, Al Gore was interviewed by Harry Smith on the CBS Early Show, but just as the media was controlled in the movie, Harry Smith only asked questions that set up Gore to reiterate his man made global warming theories.  Neither ever mentioned the emails.

Mr. Smith Goes to Washington is a brilliant piece of film to introduce folks into politics.  It should be mandatory in every political class of every school.  It takes a naive person and leads him into the ugly world of politics.   After more than 70 years this film is still relevant.  Why would our public (government run) schools not show this educational film?

Stewart does an amazing job carrying this movie.  His filibuster in the senate is classic, as a lone man standing up for what is right. "You think I'm licked. You all think I'm licked. Well, I'm not licked. And I'm going to stay right here and fight for this lost cause. Even if the room gets filled with lies like these, and the Taylors and all their armies come marching into this place."   Every citizen of The United States should watch Mr. Smith Goes to Washington. 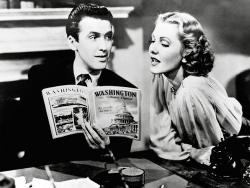 I read a story about this movie that I found interesting.  When this movie was released, the US Senate didn't like it because they thought it made them all look corrupt and they labeled it un-American.  Supposedly, a couple of Senators, including the one from Montana where the book this movie is based on is set, walked out during a screening of it.  The Boy Scouts of America even refused to allow their name to be used in the film because they feared it was too critical of the government, and so the boy's group becomes the Boy Rangers in the movie.  Meanwhile, across the Atlantic Ocean, in good ole old Nazi-Germany, they banned this movie from being shown for the exact opposite reason. They thought it showed the power of democracy and freedom in the United States where they gave the individual the right to speak his mind against the government.  It is perhaps ironic that it is the view of the Nazis towards this movie that has become the accepted one.  It also goes to show that politicians accusing people of being un-American when they dare to criticize the government, is nothing new either.

In all honesty though, I'm not a part time, full time or anytime political junky like Eric.  I find the constant attacks between people of different political parties to be boring and repetitive.  Now, having said that, I have to say that I did find this movie very entertaining anyway.  But not because of the politics, which is rather simple, and much of the process shown here is out-of-date, but because of the personalities and the performances.

Apparently Eric, Gary Cooper was Frank Capra's first choice for the part of Mr. Smith, but he was unavailable.  While I can imagine Cooper in the role rather easily, Stewart does such a fantastic job as the naive senator that you have to be glad Cooper was unavailable.  Stewart conveys such earnestness in the part that like Saunders, you become caught up with his ideas when from someone else you would just dismiss them as corny or phoney.

After seeing this movie and Only Angels Have Wings, I have to say that I've become something of a Jean Arthur fan.  She steals every scene she's in as the cynical Saunders who falls in love with Smith and his ideals.  Something about her voice is both funny and sexy.  My favorite scenes are when Saunders and Smith are together.

My only real complaint, and it's a minor one, is the ending, not Stewart's classic final moment, but the sudden change of heart by one of the characters seems to come totally out of the blue and the curtain falls almost immediately afterwards. I would have liked to have seen an epilogue or maybe just a caption that said what happened to them all. 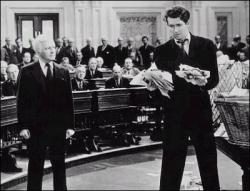 The brilliance of this movie lies in the fact that it can be interpreted through the eyes of the viewer. A cynical person will watch it and say to themselves, “I knew our government was corrupt and our politicians for sale.” A less jaded individual may see it as that rare example of evil invading public service. Of course the truth about politics, like life in general, is more complicated than that. In terms of integrity, the real Washington D.C. sits somewhere smack in that grey area in the center.

Frank Capra had a talent for cutting to the heart of human emotion. Sure his movies seem quaint, idealistic and yes, corny, but they have such plain truth and common sense in them that they will stand the test of time.

The cast is outstanding. Stewart, Arthur and the always great Claude Rains shine brightly. But even the small parts are played by well known character actors of the day. Harry Carey is especially good as Henry, the President of the Senate. And Thomas Mitchell was having arguably the best year ever by an actor in Hollywood. In addition to Mr. Smith Goes to Washington, in that golden year of 1939, he costarred in Gone with the Wind, Stagecoach, Only Angels Have Wings and The Hunchback of Notre Dame.

Jefferson Smith is such a memorable character. His wide-eyed arrival to the nation’s capitol is perfect. We could all learn to enjoy life more by keeping that sense of wonder and awe that Smith has when sight seeing around Washington.

One area in which this movie shows its age is in its attitude towards women. In one scene Smith tells Saunders that she has “Done pretty well for a woman.” And of course the 96 members (Alaska and Hawaii were not yet states) of the Senate were all men then.

Scott, the first time I watched this movie the ending bothered me a bit as well. It is so damn abrupt. Upon subsequent viewings I have noticed that the character’s change of heart that you refer to does not come completely out of the blue. There are hints all along that he may redeem himself and rediscover the integrity he had as a young man.

Everything keeps getting bleaker for Smith as he continues his filibuster. Capra stretches out the tension so tight like a rubber band and then lets it snap back instantly. I don’t think it could have ended any better way. 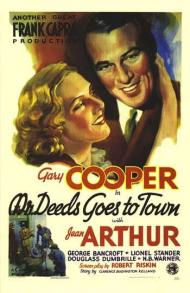