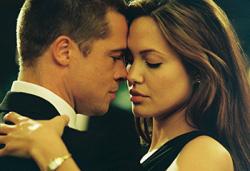 Brad Pitt and Angelina Jolie in Mr. and Mrs. Smith.

Brad Pitt is constantly being called the best looking man around. Angelina Jolie is definitely one of the hottest women around. Together they make one amazing on screen couple.

They play married couple, John and Jane Smith. They are currently in counseling because their marriage is falling apart. They never spend time together or communicate. You see, each is actually a trained assassin. The problem is that they work for competing agencies and neither know that the other is an assassin as well. One day, they each get assignments that lead them each to believe that the other is an enemy and they go about trying to kill each other.

The bullets fly fast and often. The action is breathless. But, the real center of the movie is this couples relationship. They love each other but until they discover the truth about each other they can never really bond. And once they do bond they make an awesome team.

The best thing about this movie is Pitt and Jolie's verbal sparring. They have great onscreen chemistry. Even after they join forces they continue to argue; from how to interrogate a captive to how to drive a car on the freeway while being pursued and shot at. They bicker like an old married couple.

The one problem with this movie is that it relies too much on the action when it should have stuck more with the battle of the sexes. At one point they are literally out in the open surrounded by at least a dozen men shooting at them. Blah blah blah. The real sparks happen when it is just Jolie and Pitt going at it, such as when they are being attacked in their home and Pitt grabs two guns and hands the small one to Jolie who asks, "Why do I get the girl gun?" Or when Pitt starts singing along to an Air Supply song in the car and Jolie gives him a strange look. "I like this song get used to it." He tells her.

Mr and Mrs Smith is like an old 1930's screwball comedy with lots and lots of gunfire. The action keeps the pace moving, but it is overdone. Less action and more Pitt and Jolie arguing would have made this good film even better. 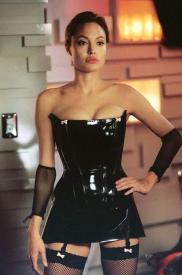 It's pretty rare when my opinion so perfectly matches Eric's, but this is one of those times. The action is fairly generic in this movie and it only gets in the way of the most enjoyable part of the film, which is watching the two stars exchange barbs. Angelina and Brad are so much fun to watch that they could have jettisoned the whole assassins plot and just made a traditional madcap comedy that would have been even more enjoyable.

Eric had the good taste not to mention all of the tabloid fodder surrounding the making of this film, but I'll go ahead and stoop to bringing it up. The reason I don't mind is because, for once, a movie where so much of the press has been about the relationship between the two stars, actually turns out to be a good one. With the memory of Ben and J-Lo and the Gigli debacle still strong in the collective pop-culture memory, I certainly had my doubts about this movie. Doubts that I'm happy to say were unfounded. Brad and Angelina are so good that I wasn't thinking about their real life at all while watching them.

The merging of comedy and action is a delicate task. It's difficult to fear for a character's life and then laugh a second later. In its best moments, when the two are arguing in the mini-van while blowing up cars on the highway for instance, this movie manages to make the transition, but as Eric said, it's the comedy that is the highlight here. 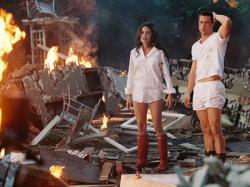 Angelina Jolie and Brad Pitt in Mr. and Mrs. Smith.

If a movie is going to work as both a comedy and an action flick then it has to be about the action first. See just about any James Bond movie for a good example. The comedy has to compliment the action without stealing the plot out from under it. This movie, as my brothers wrote, is really a screwball comedy dressed up as an action movie.

It works due mostly to the great chemistry between Pitt and Jolie. They are the hottest screen pair since Paul Newman and Liz Taylor in Cat On a Hot Tin Roof. And I agree with Eric that they sound like an old married couple. Their familiar bickering reminded me of how my boyfriend Rich and I sometimes sound.

To be honest though most of the action and the entire premise of the movie is completely farfetched. Don't expect any real dangerous tension. Just sit back and enjoy the sparks between the two drop dead gorgeous leads. I was unaware that either of them had such good comedic instincts.

With Meet the Fockers and now Mr. and Mrs. Smith Hollywood is proving that authentic star power is alive and well and still filling seats.