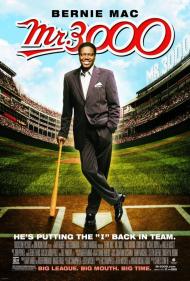 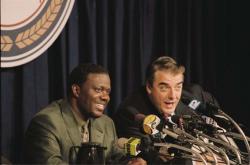 Mr. 3000 stars comedian Bernie Mac and dramatic actress Angela Bassett. The movie is supposed to be a comedy but it works best as a drama, and a weak drama at that.

Mac plays a baseball star that retires after hitting his 3,000th hit. Only, 9 years later he discovers that he is actually 3 short of 3,000. Back to the major leagues, he goes to collect 3 more hits.

Of course he is older and out of shape, but the real lesson he learns is just how disliked he was, and is, by his fellow teammates and coaches. He had a huge ego and only worried about his own stats, not the success of the team. At one point in the movie, Bassett sums up Mac's character by yelling at him, "You old! Your damn ego is so old!"

Mac is best known for his television sitcom, yet his best scenes here are the dramatic ones. As the movie progresses you see his character slowly mature until the serious ending on the field. The only real jokes in the movie are when the different characters swear at each other. Other than a Japanese pitcher, who mixes up his cussing, none of the jokes ever work. Okay, I liked Chris Noth's line when he said, "You heard the sausage, you're 2 for 58," referring to a mascot.

Although the drama fares better than the comedy, there is still little to brag about. The great Angela Bassett is underused. A plot arc involving an arrogant rookie who has a change of heart after one pep talk is completely farfetched.

I like Bernie, Bassett and baseball, but this movie does not.