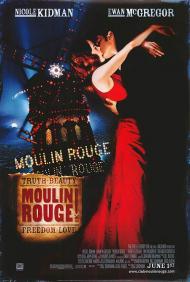 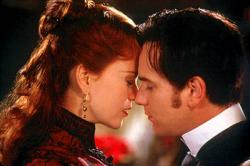 Clearly a movie that wants to evoke a reaction of any kind, whether it be love or hate, Moulin Rouge does nothing by halves. It is a whirlwind of sound and imagery that wants nothing less than to suck you into its world of Truth, Beauty, and most of all love. And beneath the pageantry, the breathtaking visuals, and the songs, that is what this movie is; a love story. Whether the viewer falls in love with this story will, I believe, be a matter of extreme personal taste. One thing is for sure, even if you hate this film, I don't see how you could be bored with it.

Based on the opera La Boheme, Moulin Rouge tells the story of Christian, a young Englishman who moves to Paris to become a writer and live at the center of turn of the century bohemia, Montmarte, more specifically, right next door to the heart of Bohemia, the night club Moulin Rouge.

Upon his arrival, he meets the impressionist painter Toulouse LeTrec who draws him in to writing the script and the songs for a play that Toulouse, along with his cronies from the Moulin Rouge, is trying to produce. Before his position can be confirmed, however, Toulouse informs him he must present his work to the show's star, Satine. What follows is a good old case of mistaken identity, where in Satine believes Christian to be the duke who she must seduce to secure backing for the show. By the time she realizes the truth, it is too late. The courtesan and the songwriter are in love.

The rest of the movie deals with their attempts to prevent the duke from discovering their love so that he will continue to back the show, in the belief that on opening night, Satine will be his.

Although centered around the time of the impressionists, this movie tends towards the surreal, but no more so than most musicals, which are all a little surreal. Many people have referred to this movie as music video. I think that is simply because there have been so few musicals of late that videos are all we have to compare this movie too. And while the film style is definitely modern, this movie is no more out there or strange than say the last 20 minutes of An American in Paris. It's hard enough for movie musicals to be taken seriously and when you add modern music to the film, they are taken even less seriously, and for no good reason. There is no law that says musicals have to be filled with old standards. But honestly, if you go to this movie expecting it to be filled with songs like the current number one song Miss Marmalade, you will be disappointed. There are more ballads in this film than there is hip-hop. Almost every song, from Roxanne to Like a Virgin has been transformed into a heightened show tune. Despite the camera angles, the quick zooms, and the computer-generated shots, this movie has not strayed so far from the old musicals.

Movie stars that can sing are a rare commodity these days in Hollywood, but fortunately for this film, both of the leads are quite good, Ewan McGregor particularly. He sings his songs as if he's been doing it for years. Nicole Kidman on the other hand, while a good singer, tends more for prettiness than for power when it comes to her vocalizations. Still, in this day and age, when the only actors who sing are on Broadway, these two are quite amazing.

Dreamlike in its visuals, this movie is a world apart from anything else out there right now. I've heard it refereed to as a difficult movie. I don't think it's difficult at all. It's different, but only in the visuals. If you're a fan of musicals, the plot will sound familiar; the setup for the songs will seem perfectly normal. People are hung up on the songs and the fact they are modern. That has nothing to do with what makes this movie different. It's the over all style of the movie which makes it different. It's definitely a case of, you have to see it to believe it.

Did I love or hate this movie? You can probably tell by my drift so far, that I loved it. Did I think it was perfect? By no means. This movie works best during the dramatic scenes. There is some good humor, but those scenes tend to drag on just a little too long. The Emcee singing Like a Virgin is funny, but we don't need to hear the whole song. There are a few other scenes that could have likewise been trimmed, but not enough to detract from my over all enjoyment of this movie.

In my mind there are two sets of people who will watch this film. The ones who feel a surge of emotion when Toulouse yells, "The greatest thing you'll ever learn, is just to love and be loved in return.", and those who groan when they hear him say it. There were both types in the theatre when I saw it, and I am proud to say that I was one of the former.

Final analysis, perhaps not for the amateur moviegoer, Moulin Rouge delivers a visual feast accompanied by beautiful songs, replete with a tragic love story. All it asks in return is a little open mindedness. Give this movie a chance. 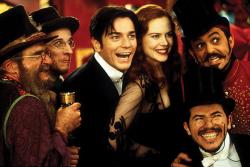 The first original big budget musical since Yentl nearly twenty years ago, Moulin Rouge! is an inspired movie which almost accomplishes everything it sets out to do.

First and foremost is it's visual beauty which is truly a feast for the eyes. Colors and shapes leap off of the screen in a whirling blur of action. The sets look like sophisticated versions of Melies A Trip to the Moon which was made in 1902 and has inspired many things including a famous Smashing Pumpkins video. Speaking of which Moulin Rouge! is the first movie to truly and successfully incorporate the style of the MTV generation with the golden age of the Hollywood musical. In a stroke of genius classic pop songs of the past thirty odd years are used to advance the plot and introduce characters.

And what great characters they are! Most especially Satine as created by the glorious Nicole Kidman. She is a cross between Sally Bowles and Camille, truly an archetype. Ewan McGregor gives us a heartfelt and deeply sincere artist as sufferer. What can I say about John Leguizamo as a fairly restrained (at least for him) Toulouse Lautrec except bravo! The rest of the cast all hold their own very nicely.

The theme of love as redemption before death is a classic of the ages. Told here with all of the prerequisite intensity and longing. All those with hearts prepare to be moved.

So what didn't I like? Well my one small complaint is in the vocal power of the two leads. Sure they are both fine, if limited, singers and he is slightly better than she. But why not go all the way and really allow the songs to soar with their full power by dubbing in two powerhouse singers instead. The movie is a dream anyway, so why be realistic in this one way?

Still this is one highly original and powerfully moving motion picture musical. A truly beautiful and rare bird in this day and age. 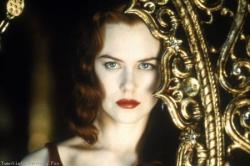 Moulin Rouge is an inspired, unique film, considering how few musicals are made these days. However, if you compare it to musicals of old you find that Moulin Rouge is an unoriginal, uninspiring long music video. It steals heavily from old movies and introduces them to a new audience with overly slick frenetic direction.

All of the songs in Moulin Rouge are pop songs that most people will recognize. That adds to the fun of the movie. You can sing along to the soundtrack at first viewing. Nice idea, except it was already done 50 years ago with one of the greatest musicals of all time; Singin' in the Rain. The songs in Singin' in the Rain were recorded by other people and movies years before the movie was ever made.

Speaking of Gene Kelly movies, didn't he make a musical called An American In Paris where a painter lives in Paris and falls in love. Part of the plot involves a wealthy woman willing to finance Kelly if he sleeps with her. There is even a segment in the big ballet number where Gene Kelly does a nod to Toulouse Letrec and the Moulin Rouge.

Nicole Kidman's character, Satine, gets introduced singing Diamonds Are A Girls Best Friend in front of a her admirers, and surrounded by dancers. Marylin Monroe already did this 55 years ago, and did it better. Kidman's musical ability shines better in later songs, but on this song she sounds a bit flat. But hey, I have been told that I am tone deaf, so what do I know. Ewan surprised me with his voice. He certainly could do adult contemporary recordings if he ever put his mind to it. The musical number on top of Satine's bedroom was my favorite. Nicole and Ewan sing lines from several pop love songs back and forth as they "fall in love".

The ending of the film was unoriginal as well. See if this sounds familiar? Two lovers keep their love private as they know there are people in their lives that want them to not get together. One of the lovers dies dramatically in the arms of the other surrounded by onlookers, right after someone was just stalking one of them with a gun. Yes, I was having visions of West Side Story.