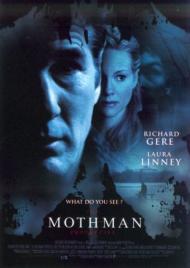 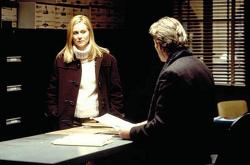 How's this for an intriguing movie plot. A man and his wife are driving in their car when suddenly the wife sees a sinister, black cloaked, winged creature appear from nowhere in front of the car. A crash ensues in which the wife is killed. Cut forward two years. The man, a reporter for the Washington Post, finds himself in a small town on the border of W. Virginia and Ohio. Townspeople are reporting seeing the same strange cloaked figure. This same figure starts giving cryptic warnings about disasters that are taking place around the world. Warnings that prove to be true. An aging author from Chicago who has been involved with the Mystic and the Occult tells the reporter the story of the Mothman. An ancient legend of a winged creature who appears just prior to great disasters. He warns the reporter to get the hell out of that small town. Something bad is going to happen. But the reporter is now in love with a local police officer and he doesn't want to leave. Sounds intriguing at least, doesn't it? Aren't you curious how it turns out? Don't you want to know what happens next?

Despite this setup, the makers of The Mothman Prophecies somehow manage to come up with nothing better than a very dull, lukewarm movie. A movie so dull that not even the talents of Gere and Linney can do anything to salvage it. It's not just that the pacing is glacially slow. It's not just that suspense is virtually non-exisistant. It's not just that apart from the two leads, you really couldn't care less about any of the characters. It's a combination of all these things but also a general malaise that just makes you not really give a damn one way or another about how this whole grey mess turns out.

And it's disappointing because this movie could have been good. They say it's based on true events. Well even if that's true, what may sound mysterious and interesting in a newspaper, doesn't mean it makes a good movie. They should have played a little looser with the details of the incident and spiced up the movie. For a start they could have actually shown the Mothman. Instead we are left with a Jaws that never shows the shark! And does everybody in this movie have to be depressed? Would a small joke here or there been so out of place?

What could have been an interesting movie is instead reduced to a really, really, really bad episode of the X-Files, only without Scully and Mulder. In other words, a big disappointment. 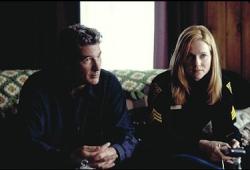 Richard Gere and Laura Linney in The Mothman Prophecies.

Although I was not as disappointed as Scott is with this movie, I will agree that it could have been a whole lot better. What threw me off is that this movie is supposedly based on true events. What true events? Were the disasters true? Was the phone call scene in the hotel room where the "Mothman" reads the reporter's mind true?

I agree with Scott that they should have played more with the story and not try to keep it based on true events, if in fact it actually is. By the end of this movie we have learned that there are greater forces at work in the universe that we cannot comprehend. Any religious person could have already told you that.

I disagree with Scott about one thing. I did find some suspense in this movie, in spite of the lousy direction and editing. Slow motion scenes are rarely effective, but they get used liberally in this movie. There are also too many wasted camera shots. This movie has close-ups of lights and objects. The goings on in this movie were convoluted as it is, so why confuse the audience with all of these extra shots of the town or inanimate objects.

This movie should have gone down one of two paths. Claim it is real, produce some evidence like the phone machine recording, and add this evidence somewhere at the beginning or end of the movie. The other route would have been to just forget the "based on true events" angle and resolve this movie with some imaginative writing. As it is, it's not worth the viewing. 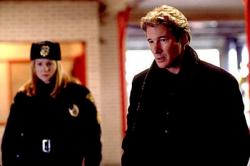 I enjoyed this movie slightly more than my brothers did. I think it does a decent job at creating intrigue and building suspense. The mystery is never fully explained though and the last half of the movie fails to live up to the premise. The cast is solid, the camera work interesting, and the setting is vividly depicted – nearly the entire movie was shot on location, with rural Pennsylvania standing in for rural West Virginia.

It was based on the 1975 book of the same name by parapsychologist John Keel detailing his investigations into sightings of a mysterious human-like, giant moth creature in Point Pleasant, West Virginia in 1966-67. On December 15, 1967 the Silver Bridge spanning the Ohio River collapsed during rush hour killing 46 people.

In 1971 investigators determined the cause of the collapse being the failure of an eye-bar in the suspension chain. Both the book and this movie conveniently ignored this detail and instead attempted to paint the bridge's collapse as the result of some mysterious, unknown phenomena. The movie even goes so far as to make the false claim, in its end credits, that the bridge's failure was never fully explained.

The best scene in the movie is the one where Indrid Cold calls John Klein on the telephone in his motel room. The skeptical reporter gives a series of tests such as placing his watch in his shoe and asking the voice on the phone where he put it. He also opens a book to a random page and asks Indrid to recite the third line from the top. Without hesitation Indrid correctly answers every question. This scene caused a shiver down my spine.

The climax where the bridge collapses is excitingly staged and filmed. The fulfillment of Connie's dream is well done and satisfying. But overall I agree that this movie could have been so much better. The Mothman Prophecies starts with a fascinating idea but fails in the execution.