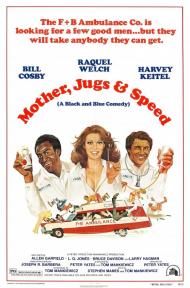 Mother, Jugs and Speed is a comedy classic from the 1970s. It is as dated to the times as it is hilarious. The jokes are sexist and sometimes dark and offensive. The soundtrack features disco, funk and Peter Frampton’s “Show Me the Way.”

This Los Angeles ambulance company employs a group of men who care as much about their job as they do the people they chauffer to the hospital. They smoke weed in their ambulance, buzz nuns and flirt with the buxom secretary/phone operator they have all nick named Jugs. The worst in the group is Murdoch. When an old man dies in his ambulance, he remarks of the man’s wife, “I hope the old lady doesn’t pin it on us.” His lowest moment is when he tries to rape an attractive young woman unconscious in the ambulance.

The best of the drivers is the gun toting, beer drinking Mother, played by Bill Cosby in a role that challenges his family friendly image. Look no further than when he gets a massage by a stripper using vibrators. He and the boss, played by a scene stealing Allen Garfield, argue but the boss knows that Mother is the best he’s got. At one point he tells Mother about letting him get away with things, “No self-respecting ambulance company would let you get away with.” And Mother responds, “That’s why I like working for you. You have no self-respect.”

Former police officer, Speed is the new man hired in. He has a suspicious past of selling drugs and has eyes for Jugs. He and Jugs seem to be the only ones who take their jobs seriously. Jugs secretly attends night classes in hopes of being an EMT. After Speed helps her get out of trouble they become romantically involved. Jugs explains to Speed that it usually takes three dates for her to give it up, but for him she will make an exception. He smiles, “They don’t call me Speed for nothing.” Jugs adds, “Let’s hope they don’t call you speed for everything.”

The jokes come fast and furious as two ambulance companies compete with each other for the dying and the dead. They are under handed, break laws and get paid off by an ambulance chasing lawyer. Some of the more memorable scenes involve a fat woman rolling down some stairs on a gurney and Raquel Welch having to deal with a man who caught his penis in his zipper. A joke the Farrelly brothers would steal 22 years later in There's Something About Mary (1998).

Although a comedy first and foremost, there are a couple of dramatic deaths. The best dramatic moment is when Mother talks to Jugs and she calls him on his façade. He, in turn, gives her a honest heart to heart about their job. The movie ends on a more serious note than funny but otherwise, Mother, Jugs and Speed is a mostly laugh out loud time capsule. 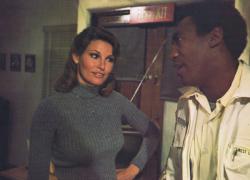 Memory is a funny thing. I was pretty sure I had never seen this movie before, but during the scene when the fat lady goes rolling down the stairs, I had the strongest sense of deja vu and realized that I must have seen it as a young child. It was the only scene I remembered, but it left a large impression on me. I'm only sorry it took so long for me to watch it again because I was surprised by how much I enjoyed this dark comedy.

Another surprise is that the script by Tom Mankiewicz is actually good. I say surprise because Mankiewicz had just written Live and Let Die and The Man with the Golden Gun, two of the worst James Bond films in that series' long history, before he worked on this film. Given how silly those scripts were, as was Diamonds are Forever, which he also wrote, perhaps he was just better at writing comedy. Or maybe director Peter Yates (who my brother Patrick will no doubt recognize as the director of Barbra Streisand's For Pete's Sake) knew how to handle his material. In any case, he wrote a very funny film here, which, as Eric noted, also includes a few dramatic moments.

Although Bill Cosby is perfect as Mother, he wasn't the filmmaker's first choice. The part was written with Gene Hackman in mind, but he turned it down, suggesting Cosby instead. This helps the film, not only because Cosby is great as the laid back patriach of the ambulance drivers, but also because if Hackman had been cast, all of the drivers for the F&B Amublance Service would have been white, making their rivalry with their competition over at Unity, a much more racial one. And although Eric's right that this is an edgier character than Cosby's normal persona, he's still the moral center of the story.

The rest of the cast is also quite good. A very young looking Keitel plays it straight as Speed and Welch is quite natural as Jugs. As director Yates said of her, "She isn't an actress of fathomless talent, but she is very professional and hard-working." Hagman plays slimy well as Murdoch. I wonder if audiences were surprised to see that nice Major Nelson from I dream of Jeanie attempting to rape an unconcious woman? And I agree with Eric that Allen Garfield is a scene stealer as the company owner in a part that a few years later would surely have been played by Danny DeVito.

In tone I was reminded of the movie M*A*S*H, another 1970's black comedy that featured a few darker moments. Like that earlier film, CBS attempted to adapt this one into a television series, but it never made it past the pilot stage. None of the original cast were involved and the character of Jugs had her nickname changed to Juggs (because her last name was Juggson), since the censors refused to allow a female character to be nicknamed for a body part. Given that attitude, it's probably for the best that the network didn't pick up the series.

I too remember the scene with the fat woman on the gurney rolling down the middle of the street vividly from childhood. I loved this movie then and I've enjoyed it several times over the years since. The 1970s was the last free decade before the societal onslaught of political correctness began in the early 1980s. I can think of no other movie that better demonstrates this freedom than Mother, Jugs & Speed. Bearing in mind the fact that one man's personal freedom can sometimes directly deny another person their rights. Such as Harry Fishbine's sexist attitude toward women as ambulance drivers. But this was a world where you could smoke a cigarette (or some marijuana) while driving an ambulance, and they even ask for cash when picking up a patient!

As Scott mentioned, I love For Pete's Sake, another classic 70s comedy. Mother, Jugs & Speed was Peter Yates' followup to that movie and together they are two hilarious time capsules of the era. He knew how to film comedy. Take the scene where we first accompany Mother and Leroy on a run. Bill Cosby, as Mother, is driving while Bruce Davison, as Leroy, begins toking on a joint. Mother, explaining why he doesn't smoke, starts lecturing Leroy about all the negative aspects of marijuana. Just when the audience begins to get the idea that Mother is straight laced, he suddenly takes a sip from a beer bottle he was holding out of camera range. It's a great way to introduce the character and it sets the tone for all the dark and irreverent humor to come.

Bill Cosby was never better on film. Mother is his most memorable character, apart from his television persona as the world's greatest father. He really acts. You can see him using humor to deal with pain and all the death he sees on a daily basis. He's also a tough son of a bitch. Raquel Welch likewise does some of her finest emoting as Jugs. She's no Meryl Streep but she pulls off the scene where she delivers a baby in the back of an ambulance quite believably. She and Cosby have a natural onscreen rapport.

While both of his costars had been famous for years, Harvey Keitel was still relatively unknown in 1976. With his boyish handsomeness he exudes a boy next door innocence that belies his true personality. Speed is the outsider in the group and he remains a bit of an enigma throughout the movie. Keitel is fine in the role even though he fails to produce much of a spark with Welch. The romance angle is the weakest part of the script. It would have been more interesting if Jugs and Mother had fallen in love.

As my brothers both wrote, Mother, Jugs & Speed throws in some serious drama amongst all the dark humor. It not only gels seamlessly but it really makes these characters seem real. For the most part this is a slice of life comedy that takes place in the real world. If it were re-made today it would probably be set in a parody of the real world, you know like in the movie Neighbors, to name one recent example. And no one would die. The entire supporting cast is great and the laughs come at a steady pace. Mother, Jugs & Speed is an under-appreciated comedic artifact from a time that has long since vanished in American culture.