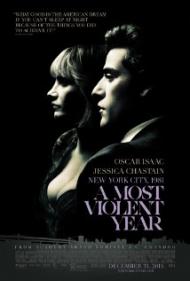 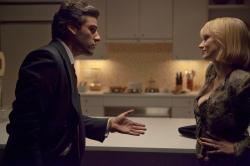 Oscar Isaac and Jessica Chastain in A Most Violent Year.

A Most Violent Year is the third film which J.C. Chandor has written and directed. And like his two previous features, Margin Call and All is Lost, this is another finely written effort. It's a gangster film set in New York City during the winter of 1981, one of the most violent periods in the city's history. It's been drawing comparisons to a Sydney Lumet film and the comparison is an apt one. It's easy to picture a young Al Pacino in the lead role, with Lumet behind the camera.

Oscar Isaac stars as Abel Morales, the owner of a heating oil company in the city. When the movie opens he's making a deal to buy some land along the Brooklyn waterfront. He puts down a hefty deposit and has 30 days to come up with the remainder or he'll forfeit his down payment, which represents most of his working capital. Naturally enough things start to wrong before his signature on the contract is even dry. Someone is assaulting his employees and stealing his trucks, draining of them of their oil and then abandoning them. The District Attorney is investigating his business and threatening to bring charges. He is awoken one night by a home invader, who abandons a hand gun in the yard, only to have it picked up by Abel's daughter later in the film. All of these troubles spook Abel's bank and they refuse to support him further, leaving him scrambling to come up with the rest of the money for the property.

The cast is terrific. Isaac is the stoic center of it all as Abel. He's an honorable man trying to run his business and provide for his family without resorting to violence. His competitors are mobsters and his wife is the daughter of a racketeer who often reverts to her family's tendencies. Chastain as the wife Anna isn't as concerned with morality as her husband. She's happy to carry a gun and doctor the books. When her family is threatened, she urges Abel to take whatever action necessary to protect them. Albert Brooks is Abel's lawyer and advisor. On the moral compass he falls somewhere in between the husband and wife. He admires Abel but like Anna, knows that sometimes the only way to get things done is to bend the rules.

1981 was a colorful year in New York City's history, with rampant crime and graffiti covered subway cars. It was a long time before gentrification and this rougher, edgier city is the background to this turf war. It's authentically depicted here in the cars, the clothes, and the hairstyles, making it possible to almost believe this film was actually shot in that year.

If there's a problem with the story it's that while the entire film is a slow boil, with the lid barely staying on the plot, it never boils over the way we're lead to believe it will. The title and the story lead you to believe there will be a violent conclusion where Abel will finally lose his cool. It almost happens. He almost gets there. There's an exciting 11th hour chase, but it's not as dramatic as audiences might be expecting. It's not that the ending isn't satisfying, just that it's not quite as climactic as it might have been.

Despite this small flaw this still remains one of the most tense and finely acted films of the year. 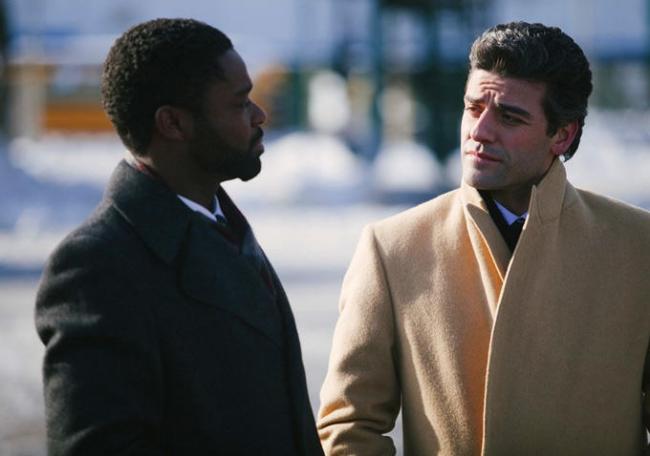 David Oyelowo and Oscar Isaac in A Most Violent Year.

The comparisons of this well-written and acted urban crime/drama to the films of Sidney Lumet are certainly fitting but the movie I kept thinking about while watching A Most Violent Year was The Godfather. Oscar Isaac as Abel Morales (is he morally able?) seems to be channeling Al Pacino as Michael Corleone. He carries himself with the same unassuming confidence and has the same steely reserve. I even thought he sounded a bit like Al Pacino, and that's something I've never noticed before in any other movie I've seen Isaac in, so perhaps he was intentionally imitating him?

The cinematography, with its subdued lighting and use of earth tones in the color schemes in some scenes, is reminiscent of the Coppola classic. Like Michael Corleone, Abel Morales is a family man. He may not be as coldblooded and ruthless as the Godfather but then neither was Michael Corleone at the beginning of that movie. And since Abel has huge ambitions it's easy to see him going down that path. He wants success so badly he can fucking taste it.

Jessica Chastain is likewise terrific as his wife Anna. She's the polar opposite of Diane Keaton's Kay Corleone. Unlike Kay, who tried to pull her husband away from organized crime, Anna eggs her husband on. As Scott wrote, she is far quicker to resort to violence than Abel is. This is best exemplified in the scene where they hit a deer with their car. While Abel tries to gather the nerve to put the poor creature out of its misery using a tire iron, his wife calmly and methodically puts a few bullets into the deer's head. When her shocked husband later inquires where she got the gun, she tells him, “I told you. I wasn't gonna continue to stand around and let these people come and get me and my children. Unlike you, who seems to be completely comfortable just standing around like some fucking pussy, I decided to do something about it.”

The third most important character is the lawyer played by the reliable Albert Brooks. Just to keep the comparisons to The Godfather coming, Andrew Walsh is Tom Hagen. He spends the movie giving loyal counsel to his only client – although it turns out he was keeping a big secret from his boss. Brooks, like Robert Duvall, is a master at playing outwardly sincere but inwardly morally dubious characters. His is the calming voice of reason.

I agree completely with my brother about both the look of the movie and the script. Visually it vividly recreates the gritty look of early 1980's New York City, without overdoing it like a music video or a television commercial would. The scenes on the graffiti covered subway train being particularly evocative of the era. The synthesized score by Alex Ebert suitably recalls the days of Miami Vice but without being too obvious about it. As for the script, it's densely written and contains some great dialogue.

My favorite speech comes at the end when Abel reveals his singular ambition to Assistant District Attorney Lawrence (see photo), played by David Oyelowo - a man with big ambitions of his own. Abel tells him, “You should know that I have always taken the path that is most right. The result is never in question for me. Just what path do you take to get there. And there is always one that is most right.” Sounds like something Michael Corleone might have said, and like Abel he would speak every word of it with complete and utter sincerity. And finally, like Michael Corleone in The Godfather, A Most Violent Year ends with Abel Morales in a very powerful position and growing. I'd love to see what happens next. After all The Godfather got a sequel. 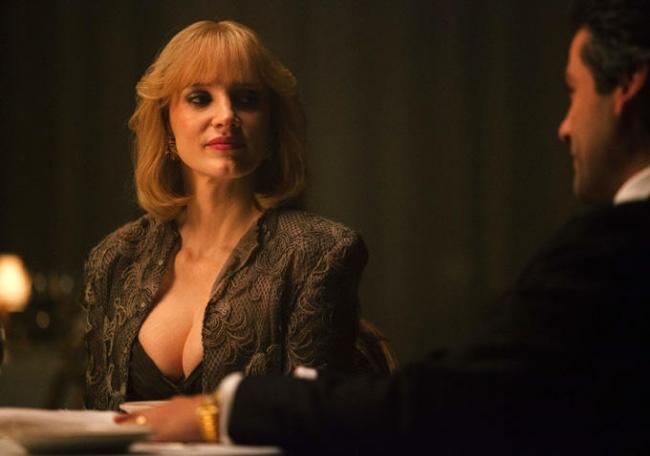 Jessica Chastain's breasts in A Most Violent Year

I was not as taken with A Most Violent Year as my brothers. The plot of the film is simply that a man is having trouble paying a bill. Okay, plenty of things happen but that is essentially all there is.

Patrick compared Abel to Michael Corleone and I believe that Oscar Isaac's performance was intentional. Throughout the story Abel tells us he is an honorable person but he is surrounded by those who are not. As Scott wrote, we wait for that moment when Abel shows us his true colors and becomes the most ruthless of them all, just as Michael Corleone does at the end of The Godfather. As Patrick pointed out, Abel Morales ends the film on top of his world but unlike Patrick, I have no interest in a sequel.

The only interest I had in Abel was whether or not he would reveal himself to be the criminal I kept expecting him to be. You could call him a victim as his company gets attacked as well as his home. However, he never allows us to see him as vulnerable. He puts up a brave front, only occasionally showing that he is worried about his situation.

Whereas Abel holds his frustrations in as best as he can, his employee, Julian, becomes an emotional wreck. Julian gets beat up and his truck stolen. The event causes him to feel insecure and he in return causes his boss some problems. Julian is a minor character but I felt pity for him. There is one brief moment where Julian nervously asks Abel if he thinks he is ready for a salesman position. Abel tells him no but we never hear why. Julian wants to move up just as Abel does. Abel's problems may be on a bigger scale but Julian's problems are no less relevant to him.

Where I agree with my brothers is the actors performances. Jessica Chastain is awesome as a cold blooded wife who pushes her husband or simply takes things into her own hands when she feels she needs to. The real eye opener for me was Oscar Isaac. Having just watched Ex-Machina, I appreciate that this guy is a true actor. How many times have you followed a movie star to only see them play variations of the same character over and over again no matter the roles. That is not the case with Isaac.

Scott called this movie a simmering pot that never boils over. He was able to excuse that plot point while I am not. A Most Violent Year is well played but not well played out. It is like a tense slide down a hill that ends without the excitement you hoped for.