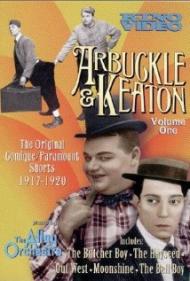 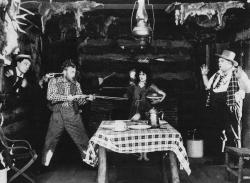 The first time I watched my way through Arbuckle's and Keaton's short films, I was not able to review them all due to some no longer being around. What existed of Moonshine on the DVD set I had was only a few remaining clips from the movie believed to be otherwise lost. I was recently thrilled to find a complete copy available for viewing on YouTube. It is in poor quality but still very watchable.

Arbuckle and Keaton play government agents sent to deal with some moonshining bootleggers. They have a secret underground lair where they make their illegal hooch. Before they can get to the hideout, Arbuckle and Keaton must deal with an inconvenient cliff, dirty pants, and a lovestruck hillbilly and her jealous suitor.

Keaton makes his entrance by being thrown from a car. His best bit is when Al St. John, a very competent slapstick comic himself, chases him up and down a tree. The entire scene is done in one shot and worth a second viewing.

The best scene however, does not feature Keaton, but Alice Lake. First she fights off the amorous advances of Al St. John, then gets spanked by her father and lastly thrown into a lake by Arbuckle, whose action immediately causes her to fall in love with him. Her father then asks how could she do that. Arbuckle's title card then reads, "Look, this is only a two-reeler. We don't have time to build up to love scenes." Several times in the film a reference is made to the fact that this is a movie. This is the first time I know of a silent film breaking the fourth wall.

Arbuckle wrote and directed this short. It contains some clever bits like hanging Keaton up to dry, but it also has such old gags as two dozen men supposedly exiting the same car. What stood out for me the most is that both Alice Lake and Al St. John get moments to shine. St. John has as much, if not more, screen time than Keaton. I am so very grateful that this film was made available on YouTube. 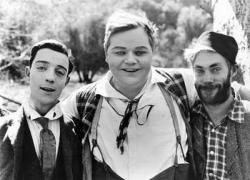 Moonshine is mildy amusing even though, as Eric wrote, the quality of the print available on YouTube is very poor. I laughed at the scene where Arbuckle digs Keaton out of the sand using a pickaxe, then “washes” Keaton's pants (with Keaton wearing them) in a river before hanging Keaton up to dry upside down from a tree branch.

Eric, although this is an early example of a movie breaking the fourth wall it isn't the first by any means. The Great Train Robbery, made in 1903, ends with a character breaking the fourth wall by pointing a revolver directly at the camera and firing. It's an idea that migrated from stage to film and is as old as the movies themselves. This is quite a clever use of it however.

Al St. John makes a memorable villain as the scruffy hillbilly. He actually looked better bearded than clean shaven (see photo). He and Keaton making like monkeys climbing that tree is by far the movie's best sight gag. Together they steal the movie away from Arbuckle.

I don't think Buster Keaton and Roscoe Arbuckle ever made a truly bad movie together. Although to be fair these movies should really be considered the work of a legendary comedy trio considering the scope of Al St. John's contributions. At any rate even their weaker efforts contain individual nuggets of laughter. Moonshine certainly does. 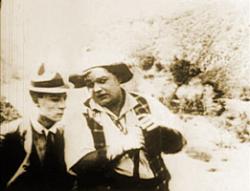 This Arbuckle/Keaton short is mildly amusing, as my brothers said. However, there's nothing particularly special about it. Apart from the settings there wasn't a great deal of variety in their shorts, just generally the same slapstick routines.

The breakage of the fourth wall is one of the only things that makes this short even remotely unique. Those moments are definitely the film's funniest. The sight gag I laughed most at was when Arbuckle hangs Keaton up to dry.

At this stage, I definitely have the feeling of seen one Arbuckle/Keaton short, seen them all. There's only so many chases, slips and falls that I can laugh at.