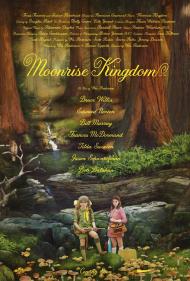 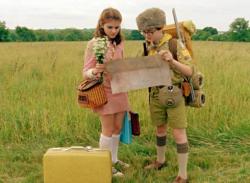 Wes Anderson's latest movie is a charming little yarn set in rural New England in 1965. It tells of an unlikely puppy-love romance between two troubled 12-year-olds who run away together just as a hurricane is approaching their coastal island community. Moonrise Kingdom contains the director/writer's trademark sense of humor with its quirky characters and cutesy details. Like virtually all of Anderson's movies it includes Bill Murray in the cast.

Bob Balaban is an on camera narrator that sets the scene in a comically deadpan manner, reminiscent of those old junior high social studies films. He tells us the year and the fact that in three days time a big storm is going to hit the island. Suzy and Sam are the two young protagonists. They met the previous summer and have been planning their escape together by mail for months. They meet up at the appointed time and place (see photo) and set off together to explore their rural island home.

They are soon being pursued by Suzy's parents (Murray and McDormand), the island police captain (Willis), and the local Scout Master (Norton) and his troop of eager young scouts. All the while the hurricane is barreling towards the island. Tilda Swinton and Harvey Keitel both show up midway through the proceedings. She's a government worker known merely as Social Services and he plays Commander Pierce, leader of a neighboring scout troop.

But despite the immense talents and impressive credentials of the adults, the two young newcomers steal the movie away from them. Kara Hayward as Suzy, wears blue eyeshadow and is at that age where girls mature faster than boys. She is physically larger and more developed than Jared Gilman's Sam. He's a smart kid though and on the cusp of adolescence. Together they take those first tentative steps towards romance and sex. The scene where they dance on the beach together in their underwear is magical and aches with a sense of the innocence we've all lost along the way.

Anderson uses the age old dramatic device of having Sam be an orphan (sorry Eric). The movie has heart without being maudlin although it contains two questionable details. One scene involving a dog seems unnecessary (you'll know what I'm talking about when you see it) and there is a sight gag that lacks any believability (again you'll know it when you see it). Thankfully Anderson makes the whole movie feel like a fondly remembered childhood fable so its lack of reality doesn't matter so much.

Moonrise Kingdom is funny in an offbeat way. It presents a self-contained, made-up version of rural New England in the mid 1960s. It has just enough resemblance to reality to ground it but Anderson's whimsical personality is evident in every scene. Even the lettering used in the opening credits is meant to evoke a fairytale. In the movie Suzy asks Sam if a deceased animal was a good dog. Sam gives the existential reply of, “Who's to say?” Indeed... 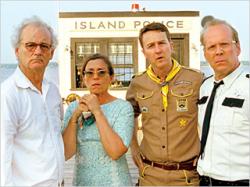 As Moonrise Kingdom began, I couldn't help but wonder if director Wes Anderson hadn't finally gone too far with his offbeat style. It seemed almost too self consciously quirky even for a director who's known for his quirkiness. As it continued and I became reacclimatized to Anderson's style, the overt quirkiness bothered me less. As Patrick said, this is a movie with just a passing resemblance to reality anyway.

The story works best when it focuses on the children. Kids see the world threw a distorted lens and so the quirkiness works best when seen through their eyes, rather than the scenes where only adults are present.

Patrick mentioned how despite an impressive big name cast of adults, it is Kara Hayward and Jared Gilman who steal the movie and I have to agree. What makes that feat even more impressive is that not only was this their first movie, but for both of them it was their first audition. They both underplay their parts quite well and their burgeoning, odd relationship gives the movie its heart.

Not that the adult cast doesn't do good work. I would single out Edward Norton in particular amongst the adults. Along with Murray, Anderson mainstay Jason Schwartzman also makes an appearance, showing up at the 11th hour in a small role.

The scene with the dog didn't bother me so much, but I do agree about the sight gag Patrick referred to. It feels like something out of a cartoon. The humor for the most part is amusing and restrained and that one joke stands out in contrast to that.

There's a definite storybook, fable feeling to this movie. It's sweet, innocent and has an old fashioned, timeless feel about it. It's a simple coming of age/first love story, but all wrapped up in Wes Anderson's unique visual style.

Moonrise Kingdom is grounded in reality but is a bit surreal, as if exaggerated by time. As adults, we sometimes remember things from our childhood that were not actually as big or scary as we remember them. Our dad used to tell us stories of his youth and embellished the truth to get the point across about how he felt and to impress us. Note the tree house the scouts built. Clearly no one could stay up there, let alone build it. A scene near the end has about eight kids up there playing poker. I can picture our dad telling us about the time he built a tree house that was amazingly high up in a tree, when actually it was not but he chooses to remember it that way.

That is how I viewed this film. I felt like our dad was telling me a story from his past with dashes of added sensationalism to make it a bit more exciting. It worked for the tone of the film. As Scott wrote, it definitely seems as if we are watching it through the eyes of children, or the filtered memory of someone recalling a childhood summer.

The captured time and setting has a plethora of humorous moments and sight gags, yet there are very few laugh out loud moments. We quickly come to like these kids and the adults around them, but a love story between two 12 year olds is rather moot, however sweet. They are two kids feeling lost in their world until they find a kindred spirit.

I wish Anderson had not included the hints of sexual awakening. When slow dancing, Sam feels Suzy's breasts and she comments that "it" feels hard. They are both in desperate need of friendship, but to suggest that at 12 they are about to soon plunge into sex belittles the impact of what they mean to each other. Sex will come up in time, and it seemed that Anderson rushed too quickly to it. Then again, this is a story being told to me by our dad, so maybe the sexual situation is likewise an exaggeration. At least that is how I will choose to remember it.