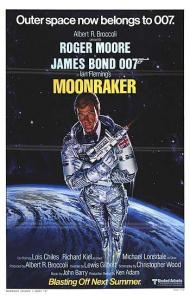 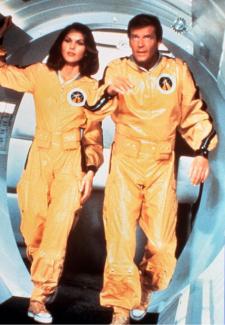 Bond in Space. That's how Moonraker will always be remembered. "Which one is that?" "You know, the one where Bond ends up in space and has a laser battle." "Oh, that one." What's funny is that today, the idea doesn't seem nearly so outlandish. With space tourism actually becoming a reality (at least for the very rich), the idea of Bond taking a space shuttle to a space station in orbit around the earth doesn't seem so far fetched. The end of the movie is actually the most entertaining part of the whole film and one of the only bits that make sense. Trust me, the fact that Bond goes into space is the least of this movie's problems.

After enjoying The Spy Who Loved Me, I actually had hopes for Moonraker, but they didn't last very long. Gone is even the minor characterization that was provided in the previous movie and back is the slapstick that so hurt the first two Moore Bonds. Plot and logic are nowhere to be found. The metal-toothed Jaws returns and is even more indestructible than he was before; able to to survive even a fall from an airplane without a parachute. The movie is once again just a string of loosely connected set piece, mostly chase scenes, set in exotic locales.

What little plot there is to this movie is basically a rehash of The Spy Who Loved Me's script. A megalomaniac wants to create a new world order by wiping out the old one, only this time he wants to do it from outer space instead of underwater. Bond is sent to investigate a stolen space shuttle. He travels to Drax industries where he immediately, with no good reason, begins to suspect its chairman, Hugo Drax, of being guilty of the crime. Drax decides, also for no good reason, to kill Bond. His attempts fail of course and all he ends up doing is confirming Bond's suspicions. Of course, if he'd just shot Bond instead of trying to kill him in a G-Force simulator, he wouldn't have had anything to worry about.

Bond follows a flimsy clue to Venice where he is chased in a gondola and ends up driving it across the Piazza San Marco after the boat turns into a hover craft. He then follows an even flimsier clue to Rio where he is involved in another chase and a horribly stupid encounter with Jaws on a tram car. Yet another flimsy clue leads him up the Amazon where he wrestles a snake, before finally blasting off into space.

Before I forget, I have to mention the most embarrassing moment in all of the Bond franchise. This one is even worse than Sheriff J.W. Pepper's two appearances. I'm talking of course about Jaws falling in love at first sight with the blond girl in pigtails. When they walk off hand-in-hand, you'll be forgiven if you have the urge to barf.

Moore plays Bond as he always does, totally unflappable. This is fine except at the end when he goes into space, couldn't he be a little impressed? Something along the lines of, "Bloody hell, I'm in fucking outer space!" would have seemed appropriate. He's also beginning to really look his age here.

There are a few good lines in the movie. My favorite is Q's quip at the end of the film as Bond and Holly Goodhead are having sex on the space shuttle, "I think he's attempting reentry."

At the end of The Spy Who Loved Me it said, "Bond will return in For Your Eyes Only". With the sci-fi craze of the late 1970s in the wake of Star Wars, the Bond producers switched to Moonraker next, a title that lent itself more easily to science fiction. For Your Eyes Only, which came after Moonraker ended up being one of the best of all the Bond films. If only it had come in the original order. The one-two whammy of The Spy Who Loved Me and For Your Eyes Only would have been the best two Bonds in a row since Goldfinger followed From Russia with Love. 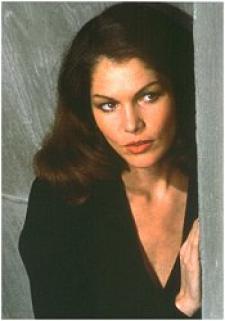 Lois Chiles is one of the dullest Bond babes.

Without any sense of a logical plot, Moonraker looks like it was haplessly slapped together. It is merely one action sequence after another that has very little to do with the previous one. Not only did Star Wars influence this movie, but the code to a secret laboratory is the same music from the space ship in Close Encounters of the third kind. At one time, James Bond set a standard that other movies copied, not the other way around.

The part in Rio must have financed the entire film. Obnoxious commercial placement is everywhere. We see two different 7UP billboards. One more than once. Several readable billboards are clearly displayed in the background. One action sequence ends with a billboard advertising British Airways.

Moore has said some of the worst Bond one-liners in 007 history. Although Scott liked the "...reentry." line, Moore gets stuck with several clunkers here. After fighting the python he says, “I discovered it had a crush on me.” After he kills someone, who falls into a piano he says, “Play it again, Sam.” (Sacrilege!) After sending Drax out an air lock into space he says, “Oh, he had to fly.”

With the presence of Jaws, and the ridiculous plot, Moonraker is practically a parody of a James Bond movie. Add a few more stupid lines and Austin Powers could have remade this movie. Oh wait, he did in the far more entertaining, The Spy who Shagged Me. 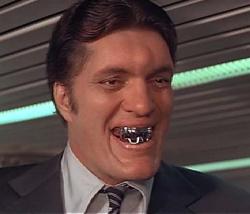 Richard Kiel as Jaws in Moonraker.

I have a different take on the Bond movies than my brothers. To me the details of 007’s missions are never important. They are what Alfred Hitchcock called “the McGuffin”, which is an interchangeable plot device used to propel the story along (for example, does the villain want one hundred million dollars or total world domination? It doesn’t really matter which). Since nearly all of Bond’s missions are to some degree ridiculous the plot in Moonraker didn’t bother me at all.

Since the Bond movies follow such a familiar formula the plot isn’t as important as other key elements. In my mind these are the theme song, the gadgets, the quips, the locales, the action sequences and the Bond girls.

Moonraker has a memorable theme sung by the always brilliant Shirley Bassy. The gadgets are OK but nothing particularly stands out. The quips, as my brothers both mentioned, are pretty bad except for Q’s final line which I have to agree with Scott is one of the best in the series. The locales are great, from old Venice to Rio during Carnival to the climax in space. This Bond really travels. The action scenes are hit and miss. I agree that Jaws on the tram car is stupid but the snake wrestling isn’t bad and the finale in space is actually pretty good. I agree with Eric that Lois Chiles is dull as dishwater.

Like you Eric, I was surprised at all the product placement (did that term even exist in 1979?) on display on the billboards. Scott, I agree also that Roger Moore is beginning to show his age although as his Bond seems to be from another era it kind of works. This movie was definitely trying to be cutting edge in terms of technology. The United States Space Shuttle program would not officially begin for almost another 2 years after the release of this movie when Columbia launched on April 12, 1981.

By my own Bond ranking system, Moonraker is not a very good entry in the series; although I have to admit that I kind of liked Jaws after he turned into a sweetheart at the end.