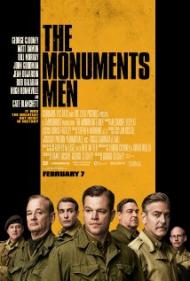 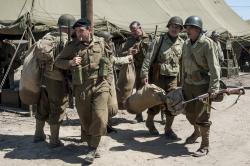 Despite its talented ensemble cast and rich subject matter, The Monuments Men fails to live up to its potential. Director George Clooney delivers this predictable WWII adventure featuring a series of war anecdotes that fluctuate between being rather dull and overtly sentimental. It is possible to enjoy this movie provided you have a high tolerance for maudlin moments (in particular one set at Christmastime) and noble speeches about the importance of great art being worth the cost of a few human lives.

Based on the book The Monuments Men: Allied Heroes, Nazi Thieves and the Greatest Treasure Hunt in History by Robert M. Edsel, it tells the story of a group of Allied museum curators and art historians whose mission it is to save Europe's great masterpieces of art, as well as other historically important cultural artifacts, from Hitler's minions. This sounds like a promising opportunity to offer a unique perspective, and hitherto untold cinematic story, of WWII. But the end result plays out more like an old man's hazy, highly-romanticized memories than a truthful account of the events.

These men; four Americans, one Brit, one Frenchman, and one German who left the Fatherland for America in 1938, are led by American Lt. Frank Stokes (Clooney). The movie follows a tried and true formula. We see the gathering of the men, who go through basic training in an amusing but brief segment that trots out a few jokes about their advanced ages. They arrive in Normandy a month after D-Day where Stokes divides the men into separate groups and sends them out to hunt down the stolen artwork.

Matt Damon, as American Lt. James Granger, goes to Paris to gather information from a woman who was forced to help the Nazis collect and hide many pieces of art during the occupation. Cate Blanchett, putting on a French accent, has never been duller. Her scenes with Damon are by far the least interesting in the movie.

Downton Abbey's Hugh Bonneville plays Major Donald Jeffries, the lone Brit in the outfit. He's a recovering alcoholic who has caused embarrassment to his family name. He goes to Bruge to save Michelangelo’s iconic Madonna and Child sculpture. Will he take his shot at redemption?

Bill Murray as Sgt. Richard Campbell and Bob Balaban as Pvt. Preston Savitz (a few jokes are made about his rank) supply most of the comedy relief. Or at least they are intended to. They share a few mild adventures as well as the aforementioned scene set at Christmas.

The final group consists of Sgt. Walter Garfield (John Goodman) and French Lt. Jean Claude Clermont (The Artist's Jean Dujardin). They see a bit more action than the other Monuments Men, even finding themselves caught on a battlefield between the opposing armies in one scene.

All of these men (or at least the survivors) meet up in Germany where the climax of the treasure hunt takes place. The Monuments Men isn't really a bad movie. I myself, am a bit of a sucker for sentiment and nostalgia, both of which this picture has in spades. But anyone expecting either sharp satire or taut action will be highly disappointed. 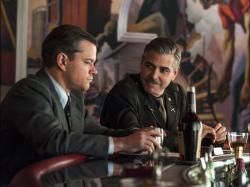 Matt Damon and George Clooney in The Monuments Men.

It's funny how expectations about a movie can change. As recently as October, buzz around The Monuments Men had it as an Oscar contender. Its release date change from December 18th to February 7th came as something of a surprise. The spin was that the special effects were more complicated than anticipated and needed more time to complete. Having seen the finished product however, I have the feeling the truth might be that the studio realized how mediocre this film was and rather than be embarrassed by its lack of nominations, they'd just take it out of the running altogether.

As Patrick said, this isn't a truly bad movie. It's just a disappointing one. It wants to be a lighthearted, comic, adventure story, but it's not lighthearted enough, comic enough, nor adventurous enough.

It begins like a senior citizen version of The Dirty Dozen. There's a gathering of different characters, each with distinct personalities and mixed nationalities into one military unit preparing to go on a mission. At least that's the idea. However, although there are some differences between them, we never really get to know any of them in much detail. Murray and Balaban do provide some very, very mild comic relief.

Clooney has proven in the past that he's a capable director, but he doesn't seem to know how to film action scenes. Patrick mentioned that not all of the Monuments Men survive, but the scenes where they are in danger are poorly filmed. One scene in particular is badly done when the action takes place almost entirely out of shot.

Patrick also mentioned the Christmas scene, which is indeed maudlin. It's also completely unearned. Up until that point there has been no mention of families back home nor any indication that this has been anything but an adventure for these guys. The mood of most of the film is something akin to an old fashioned World War II movie, but this scene feels like something out of a much more modern film, or an old episode of M*A*S*H.

Blanchett's scenes aren't necessarily the least interesting, but they do feel a little superfluous, as though the filmmakers simply wanted to shoehorn in a female character. The attempts at romance between her character and Damon's feels contrived.

Another of the film's problems is the noble speeches Patrick mentioned. Clooney is constantly spouting these, usually accompanied by stirring, over-the-top, music. A few less of these scenes and a few more moments of genuine adventure, or emotion, would have made for a much better film.

With an improved script and different director, I believe you could make a great movie about this subject. This just isn't that script and Clooney seems off his game. 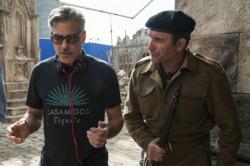 I have always been fascinated by history and have thought of how much of it has been destroyed by the powers that be. Conquerors have always ransacked the conquered. Napoleon’s troops took target practice at the ancient Sphinx in Egypt, seriously damaging it. The Spaniards wiped the written Aztec language from the planet by destroying everything they found that had Aztec writing on it in Mexico.

Yes, war is hell on history as it often rewrites it. However, if you ask any mother or wife if they think their husband’s or son’s life is less valuable than some work of art, the answer will be a resounding “No!” Thus, this film has one huge stumbling block. How do you sell the idea that these and other men should risk their lives for works of art few of them will ever see?

As my brothers wrote, Clooney seems to be selling this film’s motive every chance he gets through the noble sounding speeches. Such pontificating lines as, “We should also remember the high price that will be paid if the very foundation of modern society is destroyed.” and, “We are fighting for culture and way of life.” sound far too political and not at all from the heart.

Early in the film, Clooney tells Damon of their mission and Damon responds, “You want to go into a war zone and tell our boys what they can and cannot blow up?”  The value of human life versus “important” works of art could make an interesting debate if it were mediated by better hands than these.

Preserving art is important and this could have been the basis of a good film, but Clooney is never able to bring the audience emotionally in. Note the lack of reaction when Damon is told of Germany’s surrender. The relationship between Damon and Blanchet is horribly dull. The men who die do so without garnering much reaction from us as none have any distinct personalities. It is as if Clooney filmed this movie thinking the subject alone would create an emotional reaction from the audience. He forgot that actors are emotional tour guides for the audience. We needed them to react more to what was going on so as to allow us to better feel for their mission.

I am not sure how true Clooney stayed to the source material but he needed to take more liberties for entertainment sake. If not then he just should have produce a documentary on the subject. History is facts. Movies are entertainment. 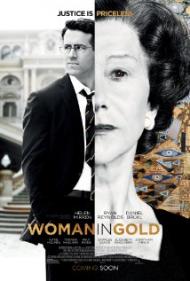